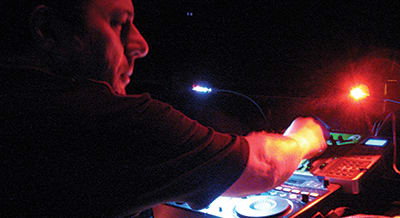 One typically associates François Kevorkian with the soulful deep house of his Wave Music label or the eclectic disco and Afro-Latin sounds commonly heard at his long-running (but now defunct) Body & Soul event. But in the last year or two, the haunting, stripped-down soundscapes of UK dubstep have grabbed the attention of this NYC house torchbearer.

Kevorkian has been championing the genre at his four-year-old Monday night event, Deep Space, which is dedicated to the celebration of dub in all its various incarnations. Kevorkian can often be found creating dub edits live behind the mixing board at the party, which has hosted the likes of Theo Parrish, Rhythm & Sound, Ursula Rucker, and Stacey Pullen.

“Dubstep really fits what we’re doing at Deep Space,” says Kevorkian. “It’s a very ‘now and tomorrow’ kind of sound. There’s a starkness that’s really futuristic. It doesn’t have layers and layers of different elements–it’s really raw and to-the-core and down to the essence of what the rhythm and the really beefy bass is about. When I play dubstep for people who are confirmed reggae fanatics, they get it right away. There’s a point of reference that’s so unmistakable.”

This isn’t to say Deep Space is the only party championing dubstep in NYC–Dave Q’s ballistic Dub War night has brought in myriad heavy-hitters, and the genre can often be heard at Broklyn Beats’ Pure Fire night. But Deep Space is notable for delivering dubstep to a completely unsuspecting audience outside the realm of drum & bass or IDM heads.

“Dubstep is the first time in many years that someone has really connected the dots between the incredible dub of the Lee Perry and King Tubby times and today’s advanced technological aesthetic,” says Kevorkian, who is working on a record with Mala from Digital Mystikz. “I’ve rarely seen so much enthusiasm for a new genre [at Deep Space] and it’s caught on like wildfire. People start screaming when they hear the bass.”