Before Never Sleep, Moiré‘s debut for Werkdiscs, was released earlier this year, it had been […] 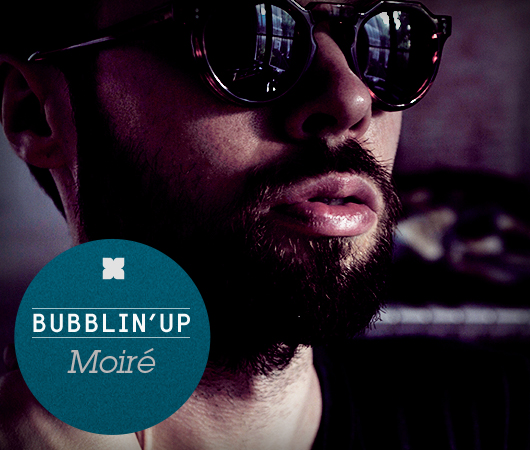 Before Never Sleep, Moiré‘s debut for Werkdiscs, was released earlier this year, it had been […]

Before Never Sleep, Moiré‘s debut for Werkdiscs, was released earlier this year, it had been awhile since Darren Cunningham’s label backed any new artists. In the time since its founding in 2003, Werk’s messy early catalog has gradually given way to cool hybrids of squashed, pulsing electronics, often delivered via marquee artists Lone, Lukid, and Cunningham himself, as Actress. The fact that only a few have managed to break into this circle speaks to its esteem, and also to the elusiveness of the Werk sound, if there even is such a thing. It remains to be seen whether Never Sleep will be canonized in the same manner as the label’s 2007-2010 heyday surely will, but it is clearly the work of a producer who takes great influence from that period. A follow-up EP, Rolx, appeared on Rush Hour a few months later, and found Moiré adapting his twitchily detailed house for the Amsterdam institution.

It’s patently reductive to speak of an artist in terms of his patrons, but in conversation with Max, the Londoner behind Moiré (who prefers to keep his last name to himself), it becomes clear that tailoring his work to their specifications is a major part of his approach. “It was very inspiring when I first heard Hazyville,” he remembers. “I already had tracks that were on that vibe, even before [it] came out.” He describes this LP, Actress’ first, as a milestone, and a signifier of what he repeatedly refers to as “the London sound—a gangster London thing, like b-boy techno—raw, weird, strange speeds sometimes, offbeat. When I was doing [Never Sleep] for Werk, I was trying to focus my head around what Werk is. Having Heidi [Vogel] on the vocal (for “Lose It,” composed with the producer Lessons), it was very urban.” Conversely, for Rolx, Max speaks of channeling Amsterdam. “For me Amsterdam is Trouw, and it’s big and techno—Rush Hour has always been a classic techno label, but of course they do loads of different things. I wanted the tracks to be a bit fuller. I was trying to somehow reflect the Belgian and Dutch vibe of parties, which are also very specific. They like it hard. They like long nights—the club license is 24 hours in Trouw, so the tracks are like stories as well. They build over time a lot more than [Never Sleep]; they’re more complex.”

Although Max has been involved in music since at least 2008, when Hazyville was released, he has spent most of his adult life in design and video production. Encouraged by Lessons (who has a “really big career in music, but in a different area of the industry—not on the stage”), he has lately allowed the music to take over. Still, it seems inevitable that some visual influence would creep into Moiré; the project is named after a pattern, and one of the few online outposts Max keeps is a Cargo Collective page where his music is paired with 3-D modeling in lurid, glitchy, and vaguely cyberpunk shades. He admits he hasn’t completely worked out a formula for counterbalancing his audio and visual sides. The abstract video for “Lose It” plays with a watery moiré effect, which he describes as “something I’ve always been obsessed with, like lines and simple design and repetition”; it was loosely composed by “jamming video stuff to the track on the go.” The artist keeps an open mind toward possible tradeoffs looking forward. “I definitely have plans to [create] some stronger visual ideas exactly for the music, and most of the time it’s going to probably be music first, and then I will write, if I can say it like that, the video or animation,” he says. “But that’s not necessarily [always the case]. I’m doing some design work for someone, and it’s quite mental, and I’m already thinking like, ‘this could be a track.’ Both worlds coexist and they need to work together. But then, as we know, you can be blind and write music, but that’s a drastic example. I’m not musically trained, so I guess the way I write or try to compose things is to draw them, or do a sketch of what the track should be.”

While each Moiré EP leans toward its respective label, this sketchy aspect is apparent throughout Max’s catalog. His tracks are sequenced in a slippery manner that at times resembles a kind of robust, steroidal microhouse. In order to keep his beats off the grid, he keeps his software’s snap function turned off. Max references African music, old-school house and techno, and inventive contemporary producers like Theo Parrish and Moodymann as influences, but “analog music” above all. “After studying some of the tracks I really liked, I [realized] the beat was always moving—that’s why there’s that swing. It’s very hard to mix them because the beat in the middle of the track is different from in the front, and the end, and so on. It has that human element. Like the real percussion, the real drumming; it’s impossible to mix these old records because the drums are always fucked up. They never play the same. With a computer, you can program everything, but with a human, no.” Pressed about his distinctive synth and bass tones, the artist says he is looking for sounds that “cut through.” “I really like the sound of the synth that you just turned on, and you did nothing to it, and you just played it as it is,” he declares. “What I don’t like about laptops is that you have hundreds of presets. And they all sound tweaked by the guy who’s designing [them].” At the same time, he maintains that his tracks “should be organized, somehow. I like jazz, and the whole idea of the pockets moving from the head of the track and coming back to the head of the track, and in ‘Lose It’ you can see that, like how it’s just disjointed and then comes together again, and that was the idea behind it.” This kind of loose freneticism is often associated with jamming, but it turns out Max that employs a painstaking approach, sometimes taking months off from working on tracks to achieve the right balance. “Because you’re so close to the music, you forget what it needs,” he says. “Music is so intense to handle. To understand it is so complex, and that’s why I always take time and then come back to it, so I can clearly see what it needs. It’s almost like it needs time in your brain. It’s crazy.”

Moiré is another semi-anonymous artist, but he maintains, “it’s just happened that way.” “I’m not wearing some stupid mask; I’m not buying fancy costumes or any shit like that—people can come and talk to me at gigs,” he says. “It’s quite fun for me because when I play, some people [who know me] come and they’re like, ‘What are you doing here?’ I’m like, ‘I’m playing!’ And they’re like, ‘You’re Moiré?!’ And I’m like, [exaggeratedly] ‘Yeaah.’ The reason I was not that keen on having [classic] interviews is just because everyone else has them, and it’s nothing against them, it’s just purely that I don’t want to be boring.” Still, he acknowledges this interview isn’t exactly helping his case: “Of course there’s no way you can keep anonymous forever, I don’t think it’s actually possible. It’s almost like, ‘Why bother?’ Or if you try really hard you’re going to come across as a total moron. People are going to be recognizing you on the street and you’re going to be escaping. Which is weird.” There are EPs, mixes, and perhaps an album in his future, but for now, the producer keeps his projects closely guarded, evidently wary of the press machine’s propensity for unduly hyping things before they’re ready. For Max, music simply isn’t worth rushing.