In some ways, the story of Call Super (a.k.a. Joe Seaton) isn’t particularly unique. Raised […] 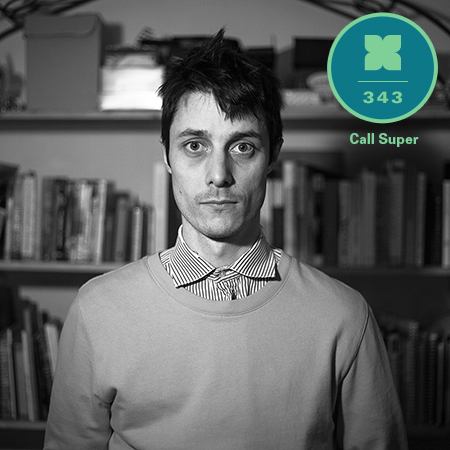 In some ways, the story of Call Super (a.k.a. Joe Seaton) isn’t particularly unique. Raised […]

In some ways, the story of Call Super (a.k.a. Joe Seaton) isn’t particularly unique. Raised in the UK and now based in Berlin, he admitted in our Bubblin’ Up profile last year that his background doesn’t really set him apart from many of his peers. However, when one listens to his output, especially the records Seaton has offered up since he settled in with the Houndstooth camp, it’s clear that Call Super isn’t the average techno producer. Calling his music difficult would be a stretch, but it’s undoubtedly challenging, even when it’s focused on the dancefloor. His latest 12″, “Depicta” b/w “Acephale II,” which dropped just yesterday, was delivered with remarkably little fanfare and even less explanation, yet it’s full of robust, propulsive rhythms. At the same time, its tunes are marked by ominous atmospherics, ghostly melodies, and crunchy percussive elements; essentially, the tracks exemplify how the Call Super sound is nuanced, complex, and designed to reward those listeners who are willing to sit back and simply be enveloped by Seaton’s artistic vision. Of course, one can only glean so much about an artist’s vision from a handful of tracks; in hopes of viewing a more comprehensive picture of what Seaton hopes to accomplish, we invited him to put together an exclusive mix for the XLR8R podcast series.

Right off the bat, a glance at the tracklist demonstrates how Call Super is someone who prefers to keep things close the vest. While most of his selections have been listed in the usual fashion, a few tracks have been adorned with cryptic titles seemingly invented by Seaton himself. Those details aside, the podcast celebrates many of the aesthetics favored by Call Super in his own music; pulling mostly from the house and techno realm, there’s a clear sense of functionality to the proceedings, even when the sounds presented aren’t particularly easy to digest. Melody plays a major role, but its presence does nothing to stop Seaton from twisting, turning, and occasionally fleshing out the sonic landscape with harsh bits of noise over the course of nearly 80 minutes. It’s an immersive listen, and, much like Seaton’s own productions, it’s something that rewards those with an attention to detail and the patience to allow things to unfold at their own pace.