Over the past year or so, few artists have popped up more frequently on XLR8R […] 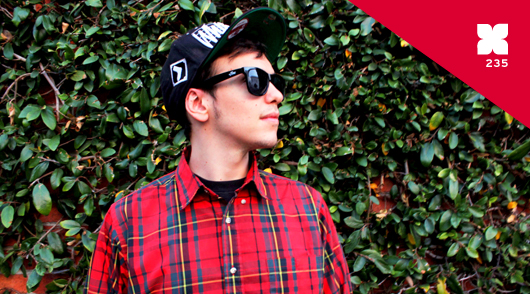 Over the past year or so, few artists have popped up more frequently on XLR8R […]

Over the past year or so, few artists have popped up more frequently on XLR8R than Distal (a.k.a. Michael Rathbun). Part of that has to do with the 28-year-old beatmaker’s inherently prolific nature, as he’s quickly amassed a hearty discography that includes releases on labels such as Tectonic, Grizzly, Seclusiasis, and Fortified Audio, not to mention his own imprint, Embassy Recordings, which he runs in tandem with fellow Atlantan Mite. Yet Distal’s rise can be attributed to more than just the volume of his output, as his music is definitely of a high quality. He’s often associated with juke and footwork (albeit from a distance), but while his tunes certainly have their share of breakneck rhythms and rapid-fire 808 sounds, even a cursory examination of his catalog shows that his music goes deeper. Naming one of his tracks “Boss of the South” certainly demonstrated some bravado, and Distal often does inject sonic elements directly inspired by Southern rap into his music. The UK bass continuum—which currently boasts its fair share of producers taking cues from similar reference points—is another obvious influence in his work, which helps explain how a Distal DJ set can fluctuate wildly between scenes, sounds, and, most importantly, tempos. That tendency holds true on this exclusive mix for the XLR8R podcast series, which happens to include a number of unreleased gems from Distal and a few of his closest associates. Readers in Europe should especially take note, as Distal will be touring there in May and June; consider this podcast a preview of exactly how much dancefloor firepower he has at his disposal.