Check out the full wrap below. 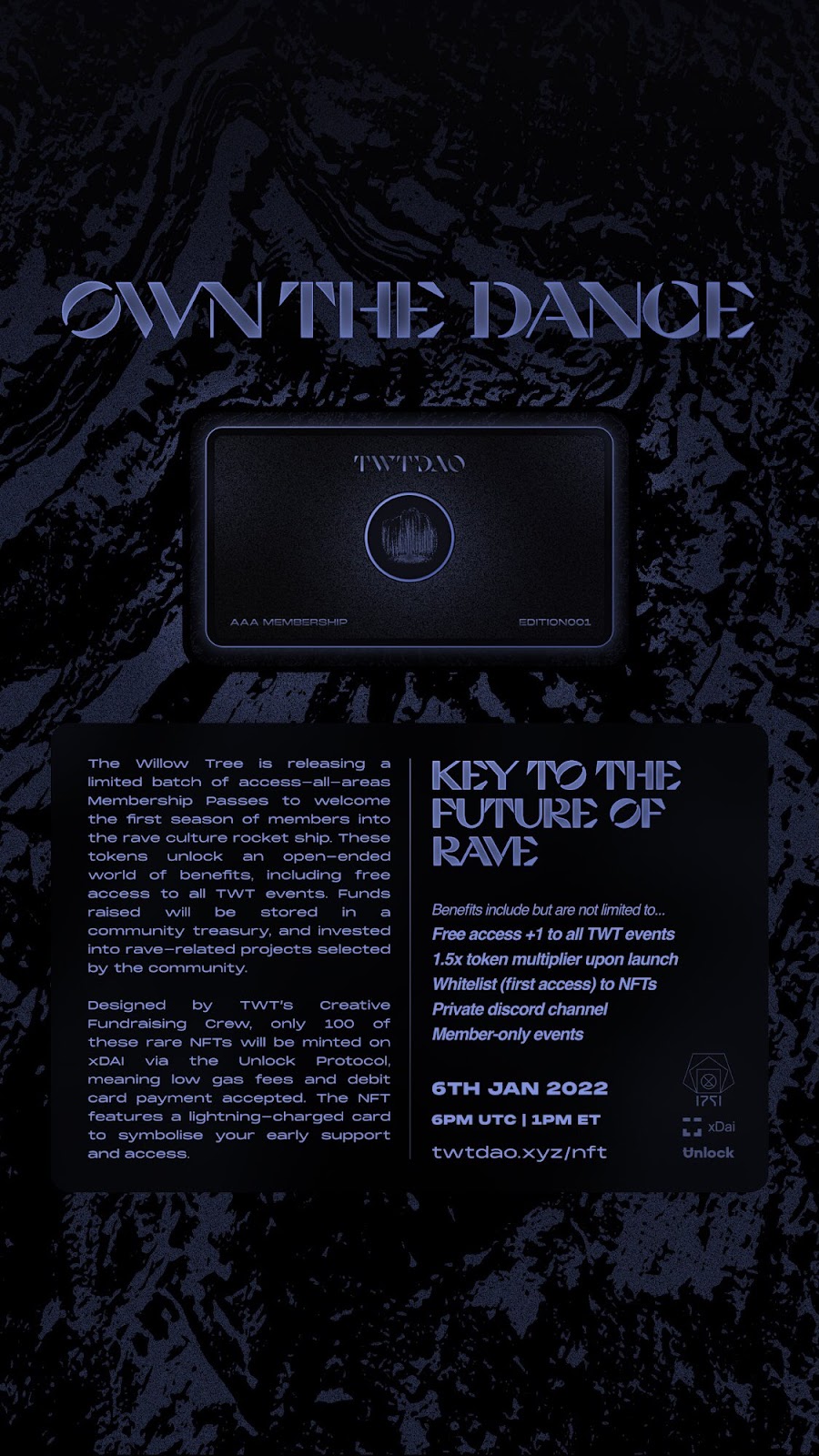 Yesterday, The Willow Tree (TWT), a DAO and Web3 community with the goal of owning and operating a global network of events, nightclubs, and venues, released its first batch of membership NFT.

Designed by TWT’s Creative Fundraising Crew, the limited batch of 100 NFTs, which were minted on Polygon using Unlock Protocol—which allowed for credit card payments—sold out in less than 12 hours. Owners of the NFTs will get early access to future drops, plus free access to all TWT events (including a +1), private Discord channels, and a 1.5x multiplier and allocation for TWT community token.

The funds raised from the sale will be, according to TWT, “stored in a community treasury, and invested into rave-related projects selected by the community.”

You can find more information about The Willow Tree here.

XLR8R recently partnered with The Willow Tree on a new editorial feature series called Own the Dance, which you can read here.

The first drop on 3LAU’s Royal platform will be from Nas.

The drop will go live on January 11 and will feature two songs: “Ultra Black,” the lead single from the Grammy-award winning Album King’s Disease, and “Rare,” a single from its 2022 follow-up, King’s Disease II, which was also nominated for a Grammy.

The tokens will be minted on Polygon and will be available to purchase with a credit card or crypto (Polygon USDC).

You can find more about the drop here.

Season Five, which is titled and aimed at Social Spaces, will focus on strengthening one-to-one relationships within the community, developing events, initiatives, and products that take members beyond Discord, Twitter, and the usual somewhat walled digital hangouts. Products announced so far include FWB Directory, which is a “traversable on-chain identity to connect, grow, and move fluidly across the Web3 ecosystem” with a unique non-transferable NFT at its core, a new FWB native tool called Upvote, and an SMS notification tool for voting. The team will also present a new town hall format and a Proposal Team.

FWB now has over 5000 token holders, including over 100 contributors split into 16 teams working on over 40 projects. FWB tokens are currently worth $57.05 at the time of writing.

You can read more about Season Five here.

To kick off the year, here is a selection of our favorite music NFT releases on Catalog, Nina, and Pianity.

Nina keeps delivering the goods with a whole host of new inspiring releases, including a deep and emotive broken-beat cut that channels pop from Kangding Ray; haunting textural ambient by Madini; a bent and loopy slice of deep house by korrē; M. Geddes Gengras’ “The Purple Sands of Hammonasset,” a score-like masterclass in ambience; and a 20-minute piece of live electronics from techno icon Regis.

On Catalog you can find an equally impressive selection, which includes fierce rap with electronic groove underpinnings by MELO-X; a meditative and heart-aching solo piano piece by Cristina Spinei; and frenetic rhythms and bass from Yung.Raj.

Pianity also has a wealth of killer cuts, including rolling atmospherics by IULY.B; Tolga Fidan’s drum-machine grooves; entrancing ambient and morphing visuals by Mathew Jonson and Malcolm Levy; and a signature slice of rolling house from Dan Ghenacia.