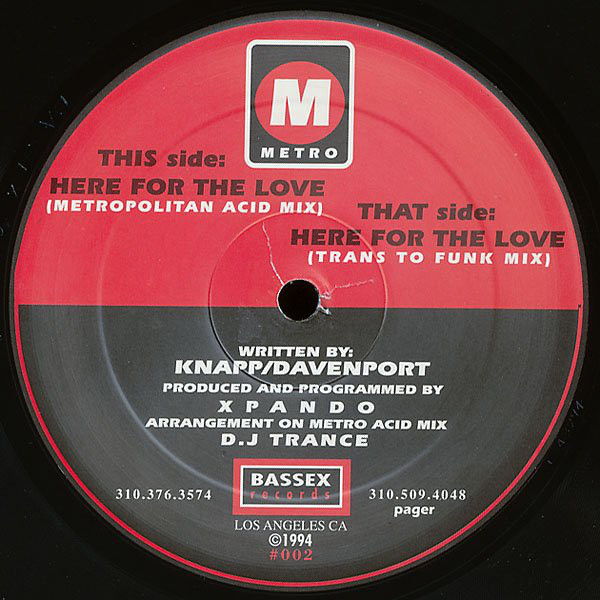 In support of XLR8R+ and independent music, we’re compiling 10 of our favorite Discogs gems into an easy-to-digest list each month; all submissions come from independent labels. You’ll perhaps know some but you’re unlikely to know them all—but these are some of the tracks that are on repeat week after week in the XLR8R offices.

XLR8R+ is a monthly subscription service to complement the main XLR8R site. By subscribing, you’re helping to allow us to continue doing what we’ve been doing for over 25 years: finding, curating, and serving the best electronic music out there, without paid influence. Each month, we share three unreleased tracks from three different artists that we feel are pushing the scene forward in inspiring ways. These tracks will be available for download in high-quality WAV format for the duration of one month, alongside a range of other content. Join our movement to keep independent journalism alive. You can find information on the latest edition of here. XLR8R+ 012 is a Dutch special curated by Tom Trago and features tracks by Deniro, Tracey, and Darling, and a sample pack and track by Trago himself.

Swayzak is made up of London duo James S. Taylor and David Brown, who pioneered a tech-house sound back in the late ’90s. They first released “Speedboat” in 1997 on their self-titled label, and it then featured on their debut LP, Snowboarding in Argentina, a year later with its hypnotizing intro and bouncy synths, it’s a sure-fire floor-filler.

Remarkably little is known about KG beat, not even the names behind the alias. The only EP to their name, Breathing Engine, was released on LA-based label Quake Records in 1995, and it included “The Spies Are Among Us.” With a moody opening and intense, clanging piano chords, it sounds like it’s going to be a dark and brooding journey, but as it moves along, you gradually feel a house beat coming through before the bass drops and it becomes an all-out weird groover.

MF Doom (a.k.a Daniel Dumile Thompson) was born in London but moved to Long Island, New York as a child. He’s known for his distinct flow over trippy jazzed-out beats and his “super villain” stage persona. This is the original Dead Bent 12-inch version released on Fondle ‘Em in 1997, and it differs slightly from its namesake on MF Doom’s debut album, Operation: Doomsday, released two years later with a slower tempo and rawer sound. MF Doom will go down as one of the legends of hip-hop and this track is one of his finest.

Reynier Hooft van Huijsduijnen, better known as Deniro, is one of the Netherlands’ many highly skilled yet relatively unknown artists. His style is deeply rooted in timeless Detroit techno, and “Atavism” is very much on that vibe. It landed in 2014 on the EP of the same name.

Download an exclusive Deniro track by subscribing to XLR8R+ here, with the snippet below.

25th Frame is made up of David Kemmoun and Thierry Tarrius. “Will You Meet Me” was released on the Percolator EP with a host of eclectic tracks and various remixes spanning hardcore, trance, acid, garage, and house. This Garage House Mix was an unusual release on Crash Records because the label is known for its releases on the heavier side of techno. With its 1993 time-stamp, garage chords, and catchy sample, it feels way ahead of the curve.

Metro were an LA-based duo made up of Mike Knapp and Xpando. In 1994, they released “Here For The Love,” an old-school acid track with a wicked groove.

Tom Trago has been a central figure in the Dutch electronic music scene for the best part of 15 years—a DJ, producer, live performer, and label owner. His sound is a mixture of Detroit, electro-pop, house, and disco. “Shutters” was released in 2011 on Rush Hour Recordings and is a deeper-than-deep disco-indebted house tune.

Check out Trago’s exclusive track with XLR8R on the latest edition of XLR8R+ below, and download it, alongside an exclusive sample pack, by subscribing here.

UK duo Matt Dunning and Matt Jackson make up Subtech. With a deep house and techno sound, they released a host of great tracks, but “Experience Music” was our pick, and not just because it’s been doing the rounds recently. It’s a record as perfect for a day party as it is for a dark room at 4 a.m.

Gavin Cheung (a.ka Nookie) is one of the unsung heroes of jungle and drum & bass. A veteran of the scene, some of his ’90s cuts remain anthems to his day. “Celebrate Life” is the B side of the Only You EP, and a lesser-known gem compared to the A-side, “Only You,” which is one of Nookie’s most celebrated works. There’s something about the arrangement of “Celebrate Life” that makes you want to listen again and again. Opening with Asian-style horns and piano drops, once the sample hits, you know it’s going to be one that stays in your memory for some time.

Mark Lewis and Alex Swift began making music in Bristol, UK in the late 1980s. Although only their second release as Language, the In The Lab EP, from which “Tranquility Bass” is one of the most memorable, is a timeless UK house gem. Some 27 years later, the duo have recently collaborated again on some new material, including remixes of tracks from In The Lab.