Michael Mayer, Roman Flügel, Recondite and Happa were among the attractions at this year's installment. 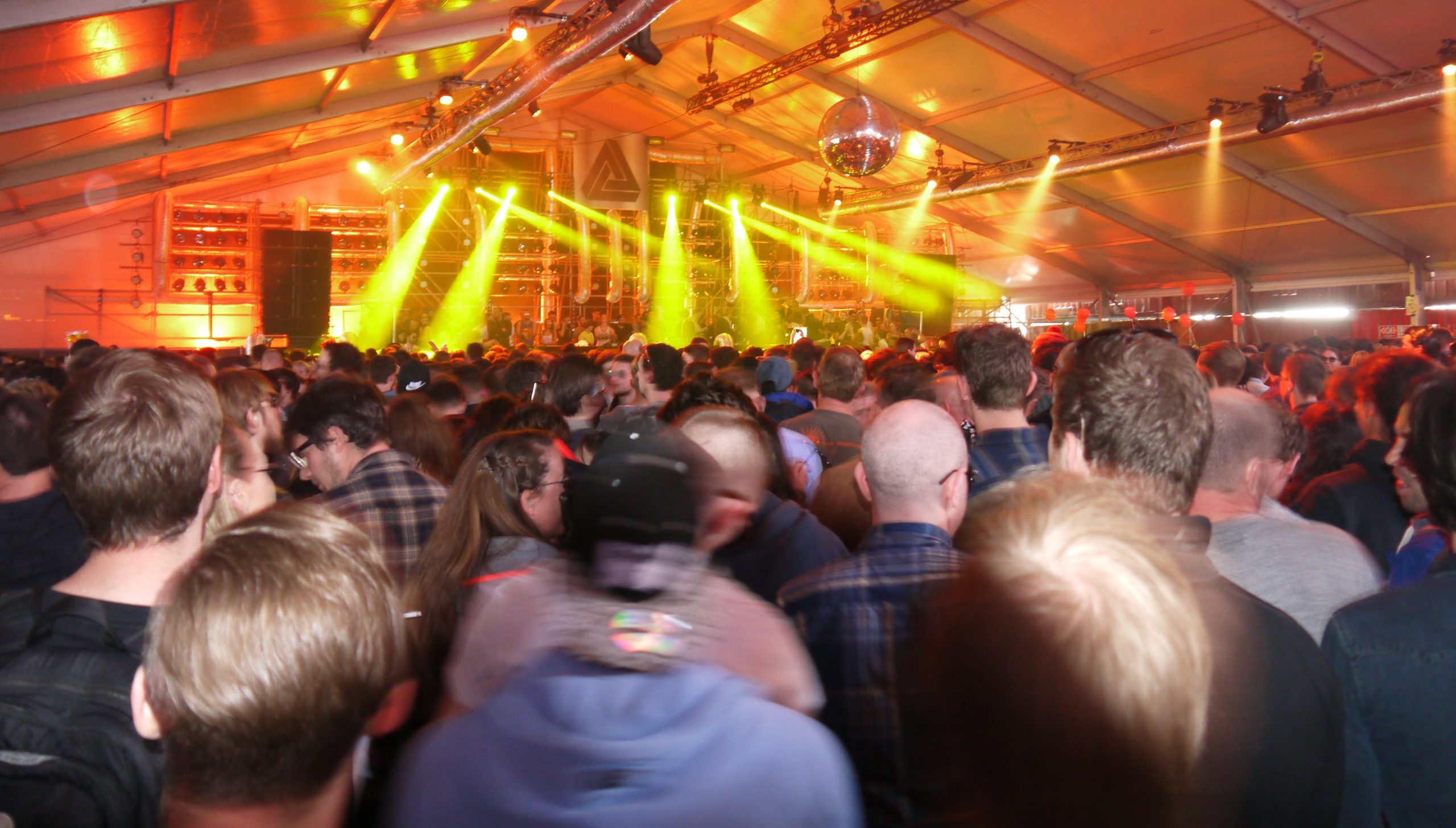 Michael Mayer, Roman Flügel, Recondite and Happa were among the attractions at this year's installment.

If there’s one thing that can be said about the Netherlands, it’s this: Dutch people really know how to party. And importantly, they understand how to put on a party properly.

Easter weekend saw the great and good of clued-up electronic enthusiasts descend on an abandoned shipyard in north Amsterdam for the country’s first festival of 2015, and things went off with a bang. Spanning Saturday and Sunday, with after-parties each day and a smaller opening bash on Friday night, DGTL was serious about music, production, sustainability, and dystopian aesthetics; at times it felt like Escape From New York: The Rave Cut. We went, saw, heard, enjoyed, and—until a disgustingly early flight home on Monday morning just hours after our last moments on the dancefloor—conquered. After picking up the pieces, here are ten things we feel compelled to write home about.

The location alone is worth visiting.

NDSM Docklands is a stunning setting for techno—of which there was plenty. During the lengthy ten-day set up more than 200 shipping containers were brought to the site, some of which would eventually form venues for the music.

It was industrial to the core—while we’re not always fans of huge warehouses, in this instance these settings worked, and the whole area was cleverly used (not least positioning Red Bull Music Academy Radio at the top of a crane overlooking the entire area). Meanwhile, with those after-parties taking over from 11PM at the same location, if you were powering through until morning it didn’t take long to reach the next destination.

In terms of overall festival experiences, DGTL was hard to fault.

In addition to laughs, of which there were plenty, the execution was impressive. The standard of food was high, with everything from real burgers (i.e., not frozen suggestions of beef) to fresh pizzas available. The sound systems in every area were good, albeit not mind-blowing. The atmosphere from start to finish was truly infectious; smiles, handshakes, hugs and shared medicines. Oh, and thanks to a moneyless payment system involving topping up innovative smart-wristbands, we can’t really remember queueing for very long- whether at the bar or obligatory sausage stand.

OK, so festivals with an environmentally aware policy are nothing new, or indeed particularly unique. Nevertheless, DGTL’s approach to not causing much of an impact on the environment was impressive.

Billed as DGTL Revolution, the organizers were actively experimenting with a variety of power sources over the course of the weekend to gauge which worked best. These included wind turbines, a hydro-pumping station, solar panels and a human power station whereby passersby could hop on an exercise bike and, using the revolutions of the wheel, generate their own electricity. Meanwhile, the Electric Hotel—basically a place to charge your phone- was similarly running on renewables, and very useful at 10PM.

Happa is a name you should remember.

It’s safe to say we heard some solid sets during the course of our stay, but first prize has to go to the ridiculously enjoyable and refreshingly varied U.K. upstart, Happa. Finishing off the Stereo stage—a.k.a. a wrought iron bunker—on the final day needed something special, and Happa was it.

Following an intense and slightly garish introduction—from both an enthusiastic guy on the microphone and one hell of a huge synth and snare build—Truss’s “Brockweir” opened the scoring for some heavy-duty rave-accented techno, riddled with clanging noises and cerated high hats, broken electro drops and bassbin shaking dubstep builders like Tessela’s “Gateway“—concluding with some nifty EQ work, tearing up staccato kicks in a way that left us wanting much, much more.

Michael Mayer and Roman Flugel, minus the sun.

It should have been one of the busiest sets of the weekend- three hours from Kompakt hero Michael Mayer and fellow Germanic heavyweight Roman Flügel. But it didn’t quite work out as planned.

The pair were playing the huge Digital stage, which just 24-hours before had been heaving from front to back. Thanks to the canvass covering, though, and a surprise appearance from the sunshine, we arrived to find it largely empty, with most people standing outside, just in earshot, enjoying the rays. Nevertheless the duo persevered, slowly drawing listeners onto the dancefloor with wonderfully infectious percussive numbers, finishing up with a sizable crowd losing their minds. All good then.

Phono Stage, from start to finish, on Saturday.

Although it’s never a great idea to stay in one fixed spot at a festival boasting six arenas, each with several highlights on their respective bills—not least because it means you can’t go to the bar, or the toilet—we’re always pleased to see a line up that’s so good you could easily choose not to move, if the mood took you. Such was Phono on the first day.

By the time we got there Locked Groove was in charge, and living up to his name with a range of funky but banging tech house stompers that represent the antithesis of the subgenre’s throwaway pap; think Mr. G–in-looped-vocal mode. From there we were treated to Amsterdam’s own Steve Rachmad; a live performance from CW/A; the ever impressive Boddika with a set defined by Impact Units’ Tenshin; followed by overall show stealer Makam, who outdid the lot with an array of big-room-yet-heads-down, U.K.–bass-leaning monsters. In short, whoever was responsible for the programming here needs a substantial bonus.

The artistic side of the event was, in a word, mental.

As we already pointed out, DGTL puts an emphasis on aesthetics, and 2015’s edition lived up to our expectations. Which is probably putting it mildly.

Dotted around the site was a perpetual pendulum, known as the Chaosgenerator—created by the winners of the festival’s Kinetic Art Pitch competition, which ran on wind; the Hypercube (pictured), open for anyone to sit in and feel like a character from Tron, and a fire-breathing mechanical dragon that played some pretty weird music. This is in addition to performers using CCTV puppets, the human disco ball Bella Berlin, and more.

Maceo Plex deserved to close his own room.

By the time the Ellum bossman took control of the booth in the arena his organization was hosting, the words “hot,” “packed,” and “sweaty” best describe the scenario. Although perhaps a little too hectic if you suffer from claustrophobia, enduring the chaos was well worth it.

A combination of notably progressive-leaning house and deep but driving numbers ensured what we saw of his three hours definitely impressed. Stand out moments like Poni Hoax’s Hypercommunication or, with its sparse ambiance and moody vocals, Plex’s own remix of WhoMadeWho’s Heads Above pretty much summarize how it all went down musically. Meanwhile, our damp t-shirts were proof of the energy inside.

It’s always impressive to see someone playing live properly. Recondite did just that in the Innervisions room (or shipping container) for 60 minutes on Sunday afternoon.

Despite this meaning missing the good weather outside, there could be no complaints. Going at it with a full hardware kit may be the latest way to show people you’re “serious about music,” but rather than this being another pointless exercise in knob-twiddling—only achieving what could be done through a laptop anyway—it was a real display of musical pedigree. From space-age synth melodies ringing out on a MIDI keyboard, to drum machines emitting the kind of toughness that can ruin subswoofers, the performance seemed fully impromptu (though in reality it was undoubtedly meticulously planned).

After-parties we wished would never end.

Thanks to the relatively intimate size of DGTL and the huge Scheepsbouwloods after-party venue, carrying things on into the early hours wasn’t a problem. Luckily, anyone who had chosen to ‘camp’ in on-site “chalets” (a generous description for what resembled a prison hut), automatically had entry to the nocturnal events, so you didn’t have to stay in the poky but adequate accommodations for long.

Sunday’s finale saw John Talabot deliver one of the best sets we’ve heard from him, followed by former Trouw resident Job Jobse taking his home crowd on a compelling, peak-time journey, showing why that club’s closing earlier this year is such a huge loss for Amsterdam. The only disappointment was the need to drag ourselves away before the last tune in order to ensure there was enough time to pack before heading to the airport.

Oh, well—you can’t have everything.