Berlin, Berghain, and Ben Klock. Though not quite a biblical trinity, the three are inextricably […] 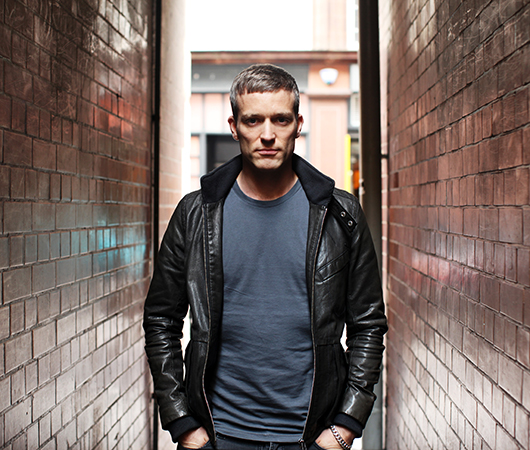 Berlin, Berghain, and Ben Klock. Though not quite a biblical trinity, the three are inextricably […]

Berlin, Berghain, and Ben Klock. Though not quite a biblical trinity, the three are inextricably connected. After all, Klock is a native Berliner who’s been involved in the city’s techno scene since its inception. Today, he’s one of the most visible residents at Berghain, the infamous German nightclub at the center of the contemporary techno universe. His marathon sets—often lasting eight hours or longer—have helped to define the sound of the club, offering a musical outlook that goes far beyond purist techno and instead champions a kind of long-form narrative that dissolves genres into a mass of textures and surfaces. That aesthetic carries over into the music Klock produces as well; his work has appeared on Ostgut Ton, BPitch Control, and Klockworks, his own label. All of that said, Klock is not completely tied to his hometown; he continues to maintain a constant touring schedule, and this Saturday, he’ll be playing Room One at Fabric in London. The night’s full details can be found here, but ahead of the party, Klock recently took some time out to answer 20 questions for XLR8R, touching on his pre-DJing ritual, his occupational history, and his thoughts on the future of Berlin’s club scene.

1. Where were you born?
Born and raised in Berlin. The former west part of the city before the wall came down.

2. What kind of jobs did you have before becoming a DJ?
My first job ever as a kid was handing out flyers for clubs on the street, followed by being a Santa Claus for Mars and Snickers. I did many things: sold Olives at a market, did factory work, was a call center agent, I did child-minding, was a street musician with a guitar, a bartender, all kinds of things. As a serious, full-time job, I was graphic designer for a couple of years.

3. What was it that made you want to become a DJ?
The bass.

4. What is your favorite movie?
I’m bad at choosing the one that stands above everything else. One of my favorites though is There Will Be Blood. Love the strange mysterious layers in it, especially with the music from Jonny Greenwood from Radiohead.

5. Describe your ideal day off.
Nature, massage, some soft smells. Actually, when I think about it now, it would be riding a horse on the beach. But I need to learn to ride horses for that first I guess.

6. What would you do if you weren’t a DJ?
Something like a zen monk.

7. What is the best part about living in Germany?
Berghain.

8. How do you define a good DJ set for yourself?
When there are no thoughts in my head, when I just follow intuition, a perfect balance between hypnotic deep tripping and strong energy.

9. What’s a production technique that you think more people ought to know?
The most important production technique is to not look at your computer screen when you’re arranging a track. It’s better to look in the opposite direction or out a window; imagine a dancefloor or get up yourself and dance to your beat. It’s definitely better for the track.

10. Name a track that always seems to work on the dancefloor.
At the moment, it’s Robert Hood’s new version of “Never Grow Old.” To be precise, it’s Hood’s alias as Floorplan. I love it, and it lifts the energy to a strong emotional level.

11. What is the longest DJ set you’ve ever played?
13 hours alone, 16 hours back to back with Marcel [Dettmann].

12. What do you do to keep your stamina up for those kinds of sets?
Nothing really. A bit of champagne and some coffee. When the flow is there, I just enjoy the long sets. Others can sleep for 13 hours, I can play for 13 hours.

13. What do you do before playing a DJ set?
Take a shower and let the driver wait. I’m always a bit late for the pick up.

14. How many records do you own?
I never counted or even calculated roughly. The quantity doesn’t mean anything to me.

15. What is the most you’ve ever paid for a record?
Six Deutsche mark for the single of Michael Jackson’s “Beat It.” It’s the first-ever record I bought with my own money. Six Deutsche mark (which would be three Euros now) was worth more to me back then when I was a kid than any other record I paid for later on.

16. What is your favorite non-electronic album?
I always have a hard time picking one favorite. I always just chose what comes to mind at that particular moment. At this moment, it’s Nick Drake’s Pink Moon. Totally different than techno. One voice, one guitar. Purity.

17. What is your favorite record store?
Hard Wax.

18. How do you see the Berlin club scene changing in the next 10 years?
I think it will stay stable and very international for the next couple of years. Then it might change suddenly or slowly. At some point, the Berlin hype will fade out a bit; maybe another city will take its place. But I can’t see that yet.

19. What’s the most underrated club in Berlin?
I have no idea. I don’t have time to go out in Berlin.

20. What will you do after answering these questions?
Enjoy the view of a lovely train ride through the south of France. (I’m playing in Marseille tonight.)