DJ Harvey (a.k.a. Harvey Bassett) has long been known for his eccentricity. The British DJ—who […] 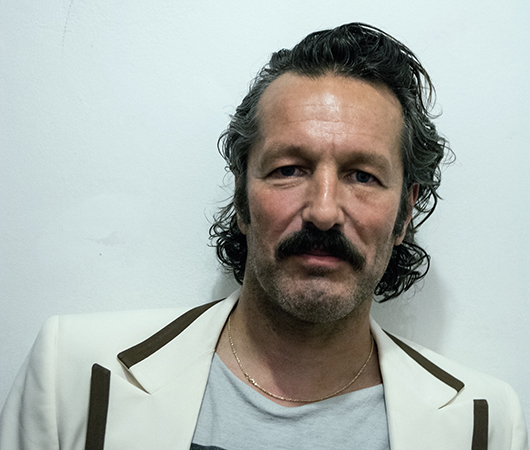 DJ Harvey (a.k.a. Harvey Bassett) has long been known for his eccentricity. The British DJ—who […]

DJ Harvey (a.k.a. Harvey Bassett) has long been known for his eccentricity. The British DJ—who now lives as an expat in Los Angeles—has spent the better part of the past 20 years developing a reputation as one of the world’s finest and most eclectic selectors. Although he’s often associated with the disco revival of the late ’90s and early ’00s and is usually celebrated for his disco edits and ecstatic late-night Balearic moments, Bassett has also always had another side that’s rooted in the rootsier end of ’70s rock. Wildest Dreams, his new rock outfit, is the latest manifestation of that fixation, and the group’s self-titled debut, which was released late last month by Smalltown Supersound, is a raucous trip through ripping guitar riffs and Led Zeppelin-style drums. Prior to a recent run of gigs in Europe, Bassett was able to take some time out to answer 20 questions for XLR8R about his favorite rock bands, his favorite places to dig for records, and his thoughts on the meaning of life.

1. Where were you born?
Middlesex Hospital in central London, recently knocked down and now the Euro-tunnel rail link.

2. How and when did you decide to become a DJ?
I fell into it really. I was always a music fan and musician so, yeah, I just fell into it. I take it seriously. I approach those decks and effects and gadgets like an instrument, however corny that may sound.

3. How do you feel you’ve changed since your days with Tonka?
In general, human cells regenerate every seven years. I’m probably a good four different people since this time.

4. What was the first Italo disco record you ever purchased?
I wish I could remember.

5. A lot of your musical projects—Wildest Dreams included—have been more rock and vocally oriented. What is it about this sound that inspires you?
As a child I was deeply moved by my mother’s rock ‘n’ roll collection. This vibration has echoed in my soul to the present day. I make the music I want to hear, really.

6. What is your favorite British rock band and why?
Jimi Hendrix Experience. While Jimi was American, The Experience was put together in the UK, but otherwise Cream too.

7. Considering the raciness of Map of Africa, is there any hidden meaning behind the name Wildest Dreams?
None whatsoever, haha. The project had a couple of names and incarnations. My manager and I came up with this. It comes from the saying “beyond your wildest dreams,” and in all honesty, everything that’s happening with it, it lives up to that name.

8. What’s been the biggest difference between playing at your underground Sarcastic Disco parties in LA and on tour?
I give it my all everywhere I play. [At] my own parties I play longer, so I get to explore a little more, but the same amount of thought and pre-thinking goes into it every time. I always say, “It may look like I’m sitting on the couch doing nothing right now, but I’m in a deep state of contemplation and consideration,” and I am.

9. Your DJ mixes have always been very thematic. How do you go about planning them out?
There’s always some conceptual foundation to my pre-recorded mixes, although I always do them in one take—if there’s a mistake in there, it stays. And although my DJ Harvey recordings have been exploited (some are not even me), I am thinking it’s time to do some more in the future.

10. Where is your favorite place to dig for records at the moment?
eBay, Red Light in Amsterdam, and Mount Analog in LA.

11. What is one thing about Los Angeles you enjoy that most people don’t know about?
I would say LA in general is America’s best kept secret. It’s a very insider city, everything is changing. You have one last chance to eat at La Fiesta Brava on Rose, a fantastic little family restaurant that will no longer be with us at the end of the year perhaps.

12. What new band or DJ do you think deserves more attention and why?
You know we’ve started curating line-ups: Lovebox last year—which was f-ing fantastic—this year’s Bestival with Eric Duncan, The Pachanga Boys, Hugo Capablanca, and Daniel Avery. I’m currently planning another mini-tour thing that is as yet unannounced, and really my taste is reflected in these line-ups. I want to go bigger and curate something that goes all day and night and into band territory too. Wildest Dreams will tour, and I plan to make it quite the happening.

13. Where is your favorite surf spot and why?
Asking a surfer his favorite surf spot is kind of like Shazaming the DJ’s rarest record, but that said, I’m really lucky and have a decent break that’s a five-minute walk from my place in Venice.

14. What was the last movie you saw and liked?
I really enjoyed Beware of Mr. Baker.

15. What do you like to do in your downtime?
I spend an insane amount of time on eBay; that, cooking, eating, and surfing. I have great friends, and I love to hang out with them in my downtime as much as possible.

16. How do you choose the first song of your DJ sets?
The first song of my DJ set is usually determined by the last song of the DJ before me, it’s really on the fly. I just make sure I have a lot to pull from.

17. How do you go about packing your record bag?
Impossible to answer, but good luggage is key. I still carry a lot of vinyl around and my excess baggage fees always kill me.

18. But really though, what was that one again, Harv?
Haha, right. Half the time I can’t remember myself. It’s the blue one with yellow writing that I found in Italy, or it’s the one I found on eBay that I’m not telling anyone the name of.

19. What is the meaning of life?
Life has no meaning except what you place on it. Existence doesn’t give a fuck, it’s all about the journey, not the destination.

20. What will you do after answering these questions?
I’m about to get on a plane to go play Dekmantel, then Brussels, and then Ireland. I haven’t been to Ireland for years, and I really can’t wait. These are a nice couple of shows, I’m excited.