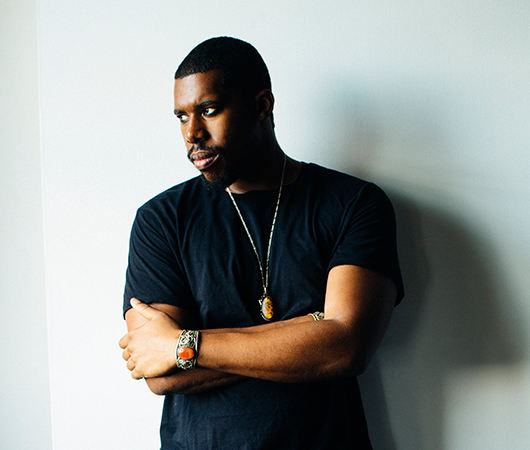 Writing about Flying Lotus for XLR8R‘s readership is like introducing the Pope to a Catholic church—everyone already knows just about anything that could be said on the guy’s behalf, and they would much rather see what he has to say, anyway. The Californian producer born Steven Ellison has appeared in our pages since his debut album, 1983, dropped in 2006, and even graced our cover two years later, when the seminal Los Angeles arrived via Warp. Then came the proliferation of the “beat scene,” followed by the game-changing Cosmogramma, the jazzy Until the Quiet Comes, and now the latest Flying Lotus opus, You’re Dead!, is imminent. Suffice it to say that we’ve all gotten to know Ellison very well over the years, but what’s another 20 questions among friends? We took some time to meet up and chat with the busy artist in Warp’s sunny Brooklyn office, and managed to uncover even more Flying Lotus facts and anecdotes. In our conversation, he told us about why he likes to make fun of people, the one time he got busted for weed while touring, what Herbie Hancock’s house is like, five movies he wants us all to see, and a whole lot more.

1. Where did you grow up?
Canoga Park, California.

2. How were you first inspired to make music?
I was first inspired to make music by my cousin Oran. He was making music on an old Mac II by himself in his little lab, and I just started taking up after him. He was the first person to put a machine in front of me to work on. He was like my big brother, someone who I looked up to. We’d play videogames together, and then one day he was all, “Nah, nah… Try this videogame.” [laughs]

3. Tell us what you remember about the earliest tracks you made.
They were really inspired by Dr. Dre, like West Coast-sounding, dark hip-hop with minor chords and shit.

4. Have you ever been discouraged to a point that you wanted to give up music production?
No.

5. How else do you think you could make a living if you weren’t an artist?
Probably something illegal. [laughs]

6. Name two pieces of gear you couldn’t live without, and what makes them so important.
I love my Fender Rhodes. It’s been a part of my family since that keyboard came out, and I’ve had it reworked so that it’s in the best condition it’s actually ever been in. That is my baby. Something else I couldn’t live without, though… Ableton?

7. Of all your past albums, which one do you return to the most? Why do you think that is?
The one I return to the most is probably Los Angeles, because that’s the one I probably play out the least in shows and those are the tracks that remind me of when everyone first got into my stuff. It does have a sound to it that I feel was definitely unique at the time—it reminds me of things, kind of like a time capsule.

8. What’s the hardest part of starting a new record?
Having a theme—knowing what to say, what needs to be said from you at that time and place and space and where the industry is at, music is at, my interests are at. Just getting your head wrapped around that, and then being able to say, “Okay, you know what, this is where I want to go.”

9. You’re Dead! is at least the second album you’ve written around the theme of death. What keeps you glued to that idea?
People dying… [laughs] In my life. It’s weird because I think that a lot of the turning points in my life have happened after people passed away. Aside from Flying Lotus stuff, it always grounds me to my core, always brings me back to my connections, interactions, and feelings with other people. It gets me out of my head and reminds me of what’s really important in this world. I feel like it always makes me ask questions and gets something going in me so I have to express myself.

10. There are good number of featured artists on You’re Dead!. Do you think Flying Lotus is more of a collaborative project now, or is it solely your own vision?
I do feel like it’s definitely my vision, but I enjoy collaborating with people. I still enjoy doing my own thing, too. I guess when it does come down to albums, there are a lot of different voices involved. It’s fun, but to say it’s just one thing wouldn’t be true.

11. Tell us the story of the first time you met Herbie Hancock.
Yeah, I went to his house out in the Hollywood Hills. He was a really cool guy, really sweet. He took us to his studio, and to get there you have to walk down a stairway that has all these Grammys and awards and plaques on the walls. You just have no choice but to look at his accomplishments—there’s platinum, gold, shiny stuff everywhere. I’ll never forget that. [laughs] I thought that was so cool of a way to go into your own world.

He had me and Thundercat over, and he played us some stuff. We played him some stuff. He told us some stories. It was perfect, and just really cool to hear that he was so excited to be a part of what we were doing. It felt really good, especially because that was right at the beginning of the album, conceptually. Having his blessing kind of helped me have the confidence to see it through.

12. Who is another jazz artist (dead or alive) you would like to work with, and why?
I really wish I could’ve worked with my aunt Alice [Coltrane]. But I guess her passing has made her influence a lot stronger, too, so who knows if I would’ve been inspired to pursue this kind of music had she still been making records. I actually would’ve loved to have her do some string arrangements for me. She was working on a string album, like an orchestral suite, before she passed away. I don’t know what’s going to happen with it, but it’d be really nice to see it come to life. It’s done, the music is written, so somebody would just have to record it.

13. What are the best and worst things about being a producer these days?
The best thing is that everyone is open to collaborate with each other. This person and this person can get into a room together, or they can send files to each other—they can be all around the world and still collaborate. That’s cool.

I think the worst thing is that there are so many people doing the same shit. It seems like there’s no way around a certain sound. The sound is defined by the time because everyone is going for the same thing. Everyone wants the same kind of beat, or wants it to hit the same way in the club. It’s weird for producers right now. Everyone seems to be second guessing themselves, like, “Oh, I’m a trap producer now… I’m a pop producer now…” It’s kind of annoying to watch people scrambling. The whole industry is scrambling.

14. What is the best piece of advice that you’ve ever received?
It’s okay to not be working all the time, and to be gentle on yourself when you’re not. When it feels like you’re losing that inspiration—or you’re in a rut, not making stuff, and your head gets all weird—be gentle on yourself. Just ease into things naturally. But you still have to ease into it, you still have to sit in the chair. You can’t just expect things to happen, but do it gently.

15. What are some of your methods for staying sane on tour?
Making fun of people. Just like bad jokes when you’re people watching. [laughs] That helps, and also having a way to stay creative. If I could get into making music and stuff on the road, I could have a lot of fun doing it. When I’m [producing], I feel like everything is okay. It’d be cool to try to produce some stuff and make a record while on the road. I think the studio is a place that feels like home, that feels comfortable. There’s something about my home, where I work. Like, even at hotels I can’t do it, even if I bring speakers and the computer I work with. There’s something about the actual space itself that’s important to me. But I don’t know… I got a nice bus this time, so I’m gonna try to work on it.

16. Do you have any horror stories from your travels?
Yeah, yeah… I almost got in some horrible shit over some weed. Before crossing the border into Canada, we got stopped in Michigan, and I thought we’d got rid of some shit. I thought we got rid of everything before we crossed over, but there was a little nug in my pants pocket in my suitcase. And the dog… The dog snitched on me. [laughs] It was a big ordeal over, like, nothing. Thankfully, it wasn’t that dramatic, but it was a three-hour ordeal and I had to pay a lot of money. It could’ve been a lot worse. That was one of those learning experiences. Keep the weed in a certain place all the time, and that’s it! The weed only exists in this drawer—never in a pocket, never anywhere else. And fucking dump that shit when it’s time to cross the border.

17. Name five films you think every fan of your music should see.
– 2001: A Space Odyssey
– I don’t know how it relates, but I really love this movie called Enemy that came out recently. There’s something about it that’s really unique—the pace of it, the vibe of it.
– Solaris—I love both of them separate, they’re totally different vibes. I really like the [Steven] Soderbergh one.
– I like The Fountain a lot. It’s crazy how it divides people. It’s also fucked up because if that movie was more of a success, [Darren Aronofsky] would probably be making weirder shit. I think he’d be a little bit more left, he’d take it even further.
– Enter the Void—that one ties in really close to this album.

18. What’s a talent you admire that you wish you had?
I wish I could write music notation. Even if I couldn’t play it, I wish I could just write it. I’d just sit around all day, like… [pretends to write on a piece of paper] Psshh… What?? WHAAA??? [laughs] Some people sit and draw in their sketchbooks, but if I could just sit and write music, that’d be so much fun. Just to go from your head straight to that? Yeah, sick.

19. Any new artists that you’re currently excited about?
Yeah, this kid Louis Cole is really cool. Morgan Delt is really cool. I like Rae Sremmurd, those “No Flex Zone” kids. They’re crazy.