20 Questions – Garnier Talks Teenage Radio Shows, Living in the South of France, and Paying Way Too Much for The KLF

At this point in his career, it would be hard to fault Laurent Garnier for […] 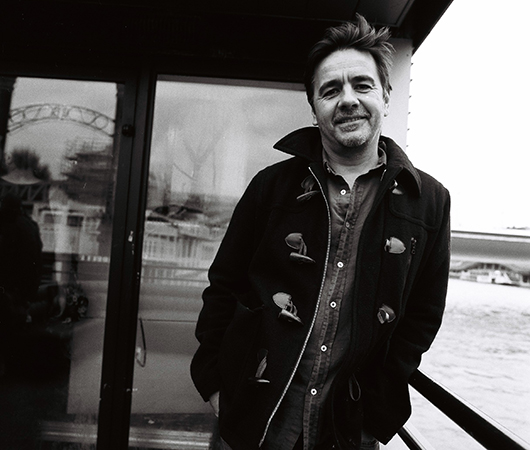 20 Questions – Garnier Talks Teenage Radio Shows, Living in the South of France, and Paying Way Too Much for The KLF

At this point in his career, it would be hard to fault Laurent Garnier for […]

At this point in his career, it would be hard to fault Laurent Garnier for taking some time off. With more than two decades in the business, the French-born DJ/producer has delivered a countless number of EPs and singles (the most prized of which is likely his 1993 acid-techno classic “Acid Eiffel”), along with a handful of diverse full-length albums, all while at different times holding down residencies at renowned clubbing destinations such as The Hacienda in Manchester, Frankfurt’s Robert Johnson, and the Rex Club in Paris. As if that wasn’t enough, Garnier also put in 18 years as a broadcast radio DJ in France, where he helped to push new trends in music and discover young artists before eventually launching his own 24-hour internet radio station, PBB, in 2003. Long story short, Laurent Garnier has done a lot, seen a lot, and heard a lot, and if the way he’s begun 2014 is any indication, he is nowhere near letting up. Currently in the midst of delivering five releases with five different styles for five different labels (including 50Weapons, Still Music, and Musique Large), we tapped the longstanding French artist for the inaugural edition of our new 20 Questions series; he answered our queries, and in the process managed to share a little insight about how he’s kept the fire burning for the past 25 years.

1. Where were you born?
Boulogne Billancourt (suburb of Paris)

2. If you could go back and be raised in a place of your choosing, where would it be?
For me, the place is less important than the people that raised you. So, as much as I don’t want to sound too hard or too deep, I would rather like to choose another family than another place.

3. What was the last great book you read?
Even Silence Has an End, the story about the captivity (with the Farc) of Ingrid Betancourt.

4. What was the last thing you Googled?
“Lulu femme nue” trailer

5. How do you pass the time while flying?
I work.

6. What is the best DJ set you’ve ever seen?
Impossible to answer, as there are far too many…

7. Do you have any pre-performance rituals?
I am afraid i don’t. I just try to be in the place an hour before I play, just to listen to the music and check the vibe.

8. From start to finish, how long does it usually take you to finish a song?
Never less than three days (when everything goes well). It can go up to much more (a couple of weeks).

9. For someone who has never heard your music before, is there a record you suggest they should start with from your catalog?
Tough question to answer. I would start by asking that person what they usually listen to. If it’s rock, I would say “Pay TV.” If it’s jazz, I would say “Man with the Red Face” or “Dealing with the Man.” If it’s more screwed up things, I’d say “Downfall.” There is a key to every door.

10. Name a track or artist that you think is criminally underrated.
The last track I found far too underrated was Jules Wells’ “Song for Clara.”

11. Do you have any nicknames?
My nickname is Lolo… but I hate it!

12. What is the best part about living in France?
Beside saying “great food and wine,” which you can find everywhere in France, I chose to move to the south of France eight years ago for several reasons. Great weather, and also the fact that I can be in a skiing resort in less than two hours, on the beach in 50 minutes, in Italy in two hours, and in Spain in three and a half hours. All this makes it very special for me.

13. Do you cook? If so, what’s the most impressive dish you can make?
I do cook pretty often… but I can’t honestly answer that. You’ll have to come down and taste my very special moukraine a la glaviouze.

14. Are we alone in the universe or is there something or someone else out there?
I wouldn’t be surprised if there is someone else… but I like the fact that the question stays unanswered.

15. What is your favorite memory from your days as a broadcast radio DJ?
When I was 14, I was going every Friday to see a friend of mine (that had built a transmitter) to do a four-hour radio show. We were mainly talking to our friends (and girlfriends) from school, but the feeling of broadcasting all the music we loved to the unknown was a real feeling of freedom. (I still treasure the tapes of our radio shows.)

16. What’s the longest DJ set you have ever played?
Thirteen hours straight at the Rex Club for the “Are You Rexperienced” celebrations.

17. What’s the most you have ever paid for a record?
Nearly 500 pounds for a copy of a KLF album.

18. What is the most worrisome thing about the current state of dance music?
EDM could be one of them, but EDM is more funny and laughable than worrying. But what really gets me is the indecent amount of money that some DJs and their unscrupulous agents (not only in the EDM circuit) are asking sometimes for a gig. Some people definitely need to come back down to earth.

19. What is the most inspiring thing about the current state of dance music?
The return of the underground music/spirit (and the DIY system that goes along with it). That value seemed to have vanished 10 years ago, but it’s coming back very strongly at the moment and I find this very healthy.

20. What’s the first thing you’ll do after answering these questions?
I’ll have a shower, as I am still in bed.