20 Questions: Horse Meat Disco on the Endurance of Disco, the Taste of Horse Meat, and the Best Curry Shop in London

Disco never died, it just dispersed and went underground. Since its fall from the mainstream, […] 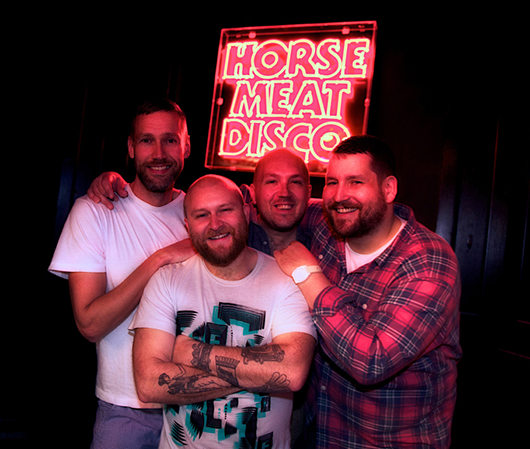 20 Questions: Horse Meat Disco on the Endurance of Disco, the Taste of Horse Meat, and the Best Curry Shop in London

Disco never died, it just dispersed and went underground. Since its fall from the mainstream, […]

Disco never died, it just dispersed and went underground. Since its fall from the mainstream, the music’s jubilant spirit has been carried on, not only in the electronic sounds that followed in its footsteps, but also in niche parties around the globe. One such party is London’s Horse Meat Disco, which is run by a collective of four DJs—Jim Stanton, James Hillard, Luke Howard, and Severino Panzetta—that, for the past 10 years, has kept the disco fire burning in the UK with its long, sweaty nights of pure, unadulterated exuberance. This week, the crew has released its fourth compilation, Horse Meat Disco Volume IV, which arrives while the collective is in the midst of an extensive world tour. Fortunately though, all four DJs were able to take some time out of their busy schedules to answer 20 questions for XLR8R.

1. Why did you name your party Horse Meat Disco?
Hillard: It came from a headline in a newspaper 11 years ago. “Horse Meat Discovered in Salami”—but it was partially covered to reveal “Horse Meat Disco.” I thought it was a good name for a party and things spun off from there. The name conjured up ideas of taboos, big willies, and, er, disco. So it was bound to be a winner with the LGBT community.

2. What is your favorite period of disco music and why?
Hillard: I love it all, truly! From the mid-’70s soul and two-step to the peak moment of ’79 and then onwards until it almost becomes house. I love the Euro disco sound and the blacker American sound. Gimme a diva singing her heart out and I’m sold!

3. What are the elements of a good party?
Hillard: Great music, good people, the perfect venue, and spontaneous acts of drag/nudity. Simple!

4. What differences have you found between nightlife in London and elsewhere?
Hillard: There isn’t much difference really, to be honest. People are people no matter where they come from, and in a club, everyone is out to have a good time. I guess the biggest difference I notice is that most places close so early.

5. What has been the most outrageous moment on the HMD dancefloor?
Hillard: The vogue balls we threw were always pretty outrageous affairs. Outrageousness is always amplified in heels! And over the years there have been some pretty genius looks!

6. How has London clubbing changed over the course of the past few years?
Howard: Everything has moved east. Nightlife used to be centered around Soho & central London (known as the West End). In the last decade or so, East London areas—such as Hackney, Dalston, Shoreditch, and Hoxton—have taken over as the busiest areas for nightlife.

7. Besides HMD, what is your favorite party in London?
Howard: Some of our favorite venues are Dalston Superstore, Plastic People, Corsica Studios, and The Bussey Building in Peckham.

8. Where is the best curry shop in London?
Hillard: For an authentic curry, head to Drummond St. Mostly vegetarian. It’s like a mini and less touristy Brick Lane. But my local Indian [restaurant], Khan’s Of Brixton, is pretty damn good!!

9. For each of you, what was the first dance record that got you into DJing?
Hillard: Class Action “Weekend”
Howard: Harlequin 4’s “Set It Off”
Stanton: Tantra “A Place Called Tarot”
Panzetta: Gloria Gaynor “Casanova Brown”

10. What is your favorite record store in London?
Hillard: I don’t do much digging for old records in London these days, but Phonica is great for all the new stuff and Kristina Records in Dalston is great too.

11. What is your favorite record store outside of London?
Hillard: I just got back from the States, and it’s always great to buy records there. A few of my favorites are Groove Merchant in San Francisco, Record Surplus and The Last Book Store in Los Angeles, and A-1 and Academy Records in New York. The Disk Union shops in Japan are amazing too!

12. What kind of non-musical influences have formed the Horse Meat Disco aesthetic?
Hillard: Film has been a big influence. Jim Stanton is quite an authority on films. I believe he goes to the cinema a couple of times a week! We always had films showing in the club as visuals and have done some screenings in the past. To a certain extent, politics too, especially in LGBT matters. The film Paris Is Burning was the inspiration behind the vogue balls I mentioned before. So fashion, politics, and art all influence us in some way.

13. Can you name an unusual record that always seems to work?
Howard: It’s not particularly unusual, but “Late In The Evening” by Paul Simon always gets a good response whenever I’ve played it.

14. Do you have any tips for frequent air travelers?
Hillard: Get a good travel pillow and if you are flying on an US airline, buy your own food!

15. Why do you think disco music has maintained its popularity for so long?
Hillard: Because it’s great music to dance to. Pure and simple. As people get into dance music—be it deep house or techno—at a certain point, they’ll go back to the roots (if they are passionate about it, maybe) and discover where it all came from. What they invariably discover is a treasure trove of musical talent and sophistication that you don’t really see often these days.

16. Have you ever actually tried horse meat? If so, how is it?
Hillard: Yes, it’s delicious. I’ve had it cured and I’ve had it like a steak. In any case, as the recent food scandal pretty much showed, we’ve all probably been eating horse meat for years. Unless, of course, if you are a vegetarian or don’t eat Crispy Pancakes!

17. What is your favorite part of London that a visitor might never experience?
Hillard: In the past, I would have said my neighborhood of Brixton, but these days, it’s pretty well known. I do really like Peckham. It’s not too far away, but it’s got a great nightlife scene thanks to the places like The Bussey Building. Lots of art students and some good places to eat and drink too. It’s now easier to get to, thanks to the Overground.

18. What do you do before a party to warm up?
Hillard: Yogic Flying.

19. What do you do after a party to wind down?
Hillard: Watch whatever TV show I’m obsessed with at that time.

20. What will you do after answering these questions?
Hillard: Watch whatever TV show I’m obsessed with.