While it’s all but impossible to predict exactly what Jackmaster (a.k.a. Jack Revill) will play […] 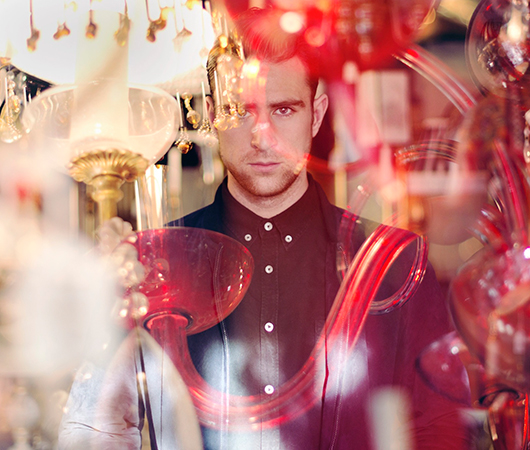 While it’s all but impossible to predict exactly what Jackmaster (a.k.a. Jack Revill) will play […]

While it’s all but impossible to predict exactly what Jackmaster (a.k.a. Jack Revill) will play at any one of his many gigs around the globe—the Scottish-born DJ has been known to dip into forgotten disco gems, house classics, Detroit techno, old-school electro, and sing-a-long pop anthems, amongst other things—there’s little question that the Numbers co-founder is capable of being a real force behind the decks. The folks at London club XOYO have certainly taken notice, which is why they’ve enlisted Jackmaster for a summer-long 13 Weeks to Jack residency. The series kicked off last month and runs through the end of September, with Jackmaster in the booth every Saturday night, occasionally spinning marathon sets alone, but usually joined by a selection of hand-picked guests, including the likes of Moodymann, Axel Boman, Joy Orbison, Kenny Dope, and others. (This coming Saturday, he’ll be playing alongside Steffi and Spencer Parker.) On top of the residency, Revill has still managed to maintain a hectic travel schedule, but we somehow managed to pin him down while he was in Ibiza for an edition of 20 Questions. In the course of answering our queries, Jackmaster touched upon his history with Rubadub, learning from bad sets, the proper role of a resident DJ, and his undying love for 24-hour fast food.

1. Where did you grow up?
In the west end of Glasgow. G12. A pretty middle-class area where everyone thinks they’re trendy and usually moves to London to be fashion designers or artists. Then I moved to the south side with my first girlfriend when I was like 22, started repping the G41 crew. It’s a pretty working-class area, but it’s easy to stay out of trouble.

2. Where do you live now?
Now I live with my mate Jasper in the city center. We are equidistant between the Sub Club, Rubadub, and a Greggs (a very shit but very tasty bakery) that’s open 24 hours on weekends. We’re also wedged in between an off-license liquor store and a titty bar, with a tanning shop across the street. It’s perfect. (Fuck, I sound like I’m on Jersey Shore, but I’m probably not far off, bar the muscles.) But our neighbors can be cunts (translation: very reasonable but we have too many parties), so I might move soon or buy a house instead of spending all my money on clothes.

4. Who were some of the first DJs you ever saw that made you want to do it yourself?
The first DJs I saw would be guys DJing at underage events at the Sub Club, Planet Peach, and Archaos. They’d be playing cheesy house, trance, and happy hardcore. I have no idea who they were, but I’d love to buy their record collections from them if they’re reading this… especially the happy hardcore DJs. Then it was locals like Harri and Slam at outdoor NYE parties or T in the Park—basically events that had no age restrictions (we were only 14, 15). The first DJ I was properly into religiously was Martin McKay from 69. He changed it all.

5. You started working at Rubadub when you were 14. Do you think things would have panned out differently for you if you had never gotten that job?
Of course. Absolutely. Without that job, I wouldn’t have had the opportunity to meet such important figureheads in the Glasgow scene and play at so many of their parties and learn how to DJ in clubs. It’s literally where I met everyone and got my education on good dance music. I was also at a real crossroads in my life at that time. I could have been living in a council house with four kids without Rubadub. They guided me down the right path and I hope to be able to give back to them one day.

6. Is getting out from behind the booth and dancing on the floor still something you consider essential for the growth of DJs?
Yeah, well, how are you gonna connect with people dancing if you don’t know how they feel on the dancefloor? I don’t do it so much in the UK because nine times out of 10 I am DJing when I’m in a club, but if I’m not playing, especially in Ibiza or at the Subby, I’m on the dancefloor.

7. When you started DJing in clubs, you were less than 20 years old. What was the secret to getting people to take you seriously?
I was actually 17. I used to play in a bar from that age too, then I celebrated my 18th in there and the management was like, “You lying cunt,” but I managed to avoid the sack. The music I played at that age was super underground and specialist (again, thank Rubadub), so people, while pretty surprised, would take me seriously. But usually, there were only 50 of them there. Haha.

8. How did the XOYO residency come about?
They just asked me and I jumped at it. I’m Numbers till I die, but there are a lot of us and we work as a committee wherein democracy rules, so it’s nice to be able to break out on your own sometimes and have the final say. I’m a bit of a control freak, so it’s definitely what I needed at this time. It’s been going so well so far. The crowd and guests have all been amazing.

9. For readers who haven’t been to a party at XOYO, how would you describe the vibe compared to other clubs?
I wasn’t a huge fan of XOYO when they first opened, but then they refitted it and completely transformed the club and I love it now. We’ve done six parties and the vibe has been unreal at each one; from as early as 10 p.m. people are whistling and shouting. It’s been the best I’ve seen in there personally, although unfortunately, I didn’t make it to any of the Eats Everything or 2 Bears parties. The guys from the club brought in a huge Rane rotary mixer for me, and I brought in a big neon Jackmaster sign for behind the booth and it’s made the venue look and sound so good. I’m smiling just thinking about what’s to come from the rest of the season.

10. As a resident DJ, what do you consider your main roles to be?
A good and gradual warm up, crescendo, and a huge finish. Make it your own whilst paying respect to your guests, musically.

11. It’s late and you’re drunk after a gig. Where are you going to eat?
Usually, I don’t have an appetite after a show. I won’t explain that one. I’m sure you know what I’m saying.

12. If you could go back to back with literally anyone (non-DJs included), who would it be?
Jeff Mills.

13. Over time, has the challenge of playing with an eclectic range of friends helped you improve your own sets when you’re playing alone?
Yes. I think I learn from every single DJ I’ve seen or played alongside. Even when they are shit. Especially when they are shit actually. It’s a reminder to keep doing the things you do right, and not fall into bad habits, which I’ve been guilty of in the past.

14. What’s a typical Jackmaster day like leading up to a gig?
These days, I always try to sleep beforehand if possible. I’m traveling all the time and it fucks you up over time. I’ll eat some good room service and have a few pints whilst selecting tunes to get me in the mood and get my mind state to a place closer to that of the crowd.

15. Is there ever a time where DJing starts to feel like a “real job”?
I always said that when it did, I would quit. But yeah, when the gigs are shit and you have to do stuff like travel straight from the club to the airport, and take three flights to get home without sleep. But even if it feels like a real job, it’s still the best real job in the world.

16. What do you do to prevent the endless party loop from getting stale?
Surround yourself with people who have dynamite banter and care about you, rather than just hangers and “yes men.” There are certain friends I have that I find impossible to be in a bad mood around, just because they’re so funny. They know who they are.

17. Are there any tracks or artists in particular that you are playing constantly these days?
If I tell you that, then everyone will start playing them. I’ve been bringing back Prince’s “Controversy” a lot at the moment though, plus a couple of new bits from Skream and Jasper James.

18. What was the last non-electronic concert you attended?
I can’t even remember the last one. That is bad. Of course Prince played Glasgow when I was out of town. Maybe a Chic gig last year was the last time. It was excellent of course.

19. What was the last video you watched on YouTube?
This guy.

20. What’s the first thing you’ll do after answering these questions?
My sleeping pattern in Ibiza is fucked. It’s 5:25 a.m. so I’m going to go to the 24-hour McDonald’s now, sneak in a few hours of House Of Cards on Netflix, fall asleep in the sun for a bit, then try and find some inspiring music for this weekend’s shows.