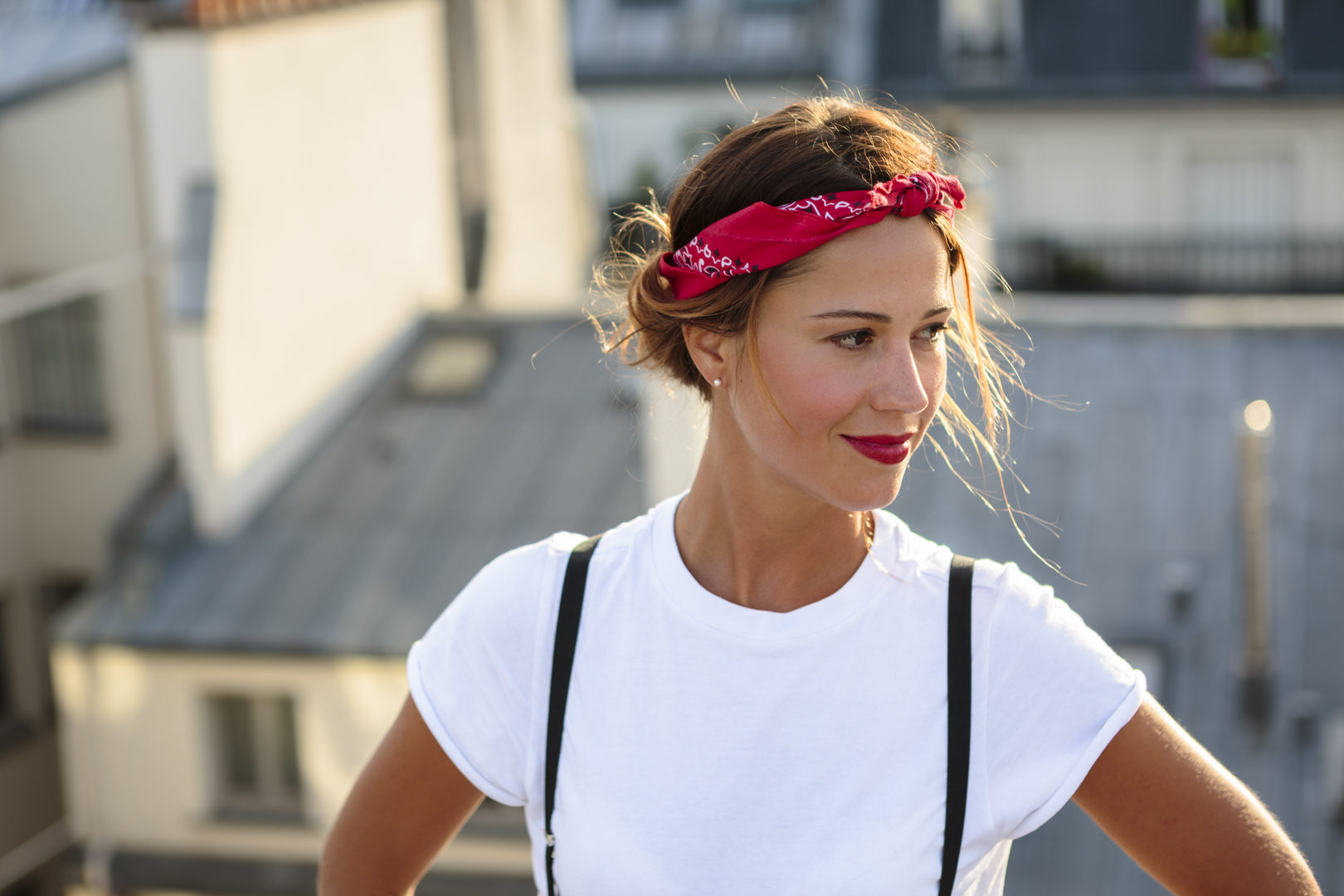 Molly is a DJ, producer, and label owner currently making waves in house music circles. Alongside compatriots such as Lamache, Zendid, Varhat, Robin Ordell, and Janeret, Molly is part of a new wave of French artists making their mark within the scene via carefully crafted musical identities. Many in this new generation orbit Paris’ Yoyaku Records, and it was Yoyaku’s sub-label AKU that released Molly’s solo debut, SB Relief, a groove-laced three-tracker that followed remixes on Rekids, Karlovak, and All Inn.

Although now an established producer, Molly’s most widely known as a skillful selector and curator, evidenced in most part by her long-standing residency at Rex Club, where she presents her monthly party HEAD_ON, which has hosted the likes of Delano Smith, Cassy, Fred P, Omar S, Losoul, Lawrence, XDB, Levon Vincent, and many more. With the Rex Club residency as a launching pad, Molly has gone on to be a regular fixture at institutions around the world, including Panorama Bar (Berlin), Circoloco (Ibiza), Robert Johnson (Frankfurt), S.A.S.H. (Sydney), Awakenings (Holland), Piknic Electronik (Canada), Into The Factory (Sweden), and many more.

Taking her curational skills outside the booth, last year Molly launched RDV (Récit de Voyage), a record label that acts as a platform for her to cement her vision of house, presenting music from talented artist friends, artists she meets on her travels, and, of course, herself. The label has since gone on to release three records from Prophets of a New Generation (a.k.a. Michael Zucker & Pete An), Aybee, and Aleqs Notal and 1977, with a various artist compilation forthcoming, featuring cuts from, among others, Dana Ruh, Marion Poncet, DJ GLC, and Molly—you can stream Molly’s track below.

With Récit De Voyage Volume 1 on its way on May 21, we caught up with Molly for our latest 20 Questions to discuss her approach to production, the plans for RDV, and how she stays sane on tour.

Molly will be performing alongside Magda, Sonja Moonear, Ricardo Villalobos, Vera, Ellen Allien, Apollonia, Praslesh, Bella Sarris, Brothers Black, Anthea, Oshana, Topper, Varhat, Janeret, and many more at Prague’s UP Festival from May 11 to 13. You can find more information and tickets to UP Festival here.

I’m in Corsica right now. Between April and October, I spend half of my time between here and Paris. It’s the perfect place to chill and rest my mind, but I also organize a festival there (Cargese Sound Festival) so we have to start preparing everything for this, too.

2. What is your earliest musical memory?

At school when I was a child, I had a teacher who was a nun who used to make us sing with the right tone by putting her head on top of ours, her mouth above our skull, to get us to match the sound in our mind…I still remember her doing it but it never really worked on me 🙂

3. What was the first record you ever bought?

4. I understand you discovered house and techno on a trip to London—can you tell us more about this experience?

I used to live in Toulouse in the South of France. I was studying Law and; Economics at the university there and spending the summer in London with a friend, having a little summer job and the rest of the time enjoying the city and nightlife, especially at the club The End—the place where everything started.

5. When and how did you start DJing and producing?

The production arrived many years after—I was very lazy at the beginning. I started by doing some remixes. It was the best way for me to learn, with a deadline, and the best way to force me to spend time on the computer. But I was working on the side and could not really take the right amount of time to spend on it. DJing was easier. Two years ago I left my job, so it was the time for me to get back on the production side.

6.Your 2017 solo debut on AKU followed a string of remixes on Rekids, Karlovak, and All Inn. Do you find the process of remixing different to producing solo material? If so, how?

It’s different, for sure, but like I said it was a way for me to learn production. Doing your own tracks and finding your own sound is a long process that I could only reach when I decided to spend time in the studio. Now that I feel very comfortable in the studio, I made lots of music recently and prefer to work on my own music than doing remixes.

7. When writing music, do you start with a clear idea in mind or do you jam until something sticks?

I prefer to jam until something sticks. I always go to the studio and decide to jam with the drum machines or synths and then I start a track like that.

8. How do you organize your music—digital and vinyl—for a gig?

Ah—the question! I am so disorganized…I am ashamed. I always prepare my record bag at the last minute, same for digital. It means that I prepare my bags or digital tracks with the feeling of the moment—which mood I am in and what kind of music I want to play: more house or more techno.

9. Do you have any go-to tracks for rescuing a dancefloor?

There are some tracks that work on every dancefloor, so yes, I have a few.

Not a ritual, but right before playing I always try to “clean” my mind and feel peaceful. I sometimes meditate in the hotel room if I don’t have the time for a power nap when I am tired. It helps me to bring back the energy I need to play!

I try to sleep as much as I can. I am happy that I can easily fall asleep on the plane and also in hotels, even for a couple of hours. I’m not drinking that much usually—unless you bring me a good bottle of red wine 😉

I drink lots of green tea and eat fruit…I think lots of DJs do the same, too.

12. Looking back over the year, is there one gig that stands as the best you played?

I had many great gigs this year…. I had a great one recently in Barcelona for Brunch Electronic. My last set at Heidegluhen (Berlin) a few weeks ago was also magic, and I had a great experience at the beginning of last month in the Indian Ocean…I can’t name one in particular, because all of them are different!

13. Your new label RDV is approaching its third release—what’s in store for the label this year?

Yes true, the new release should be out this week, a split EP from two French guys Aleqs Notal and 1977. Next will be a release from Dana Ruh with a remix from me, and a digital compilation Recit de Voyage Volume 1, which will be coming out this month with music from newcomers, artists that I met during my travels, and also from some friends and well-known artists. After that, we have plans for another split EP, a 10-inch with two tracks from two great producers—but I keep this one as a surprise!

14. What is it about a track that makes you want to release it on RDV?

Music is about feelings. How does the track make you feel? If you have goosebumps, if it reveals some emotions, that’s a great sign. When I listen to the tracks, if the music talks to me and makes me feel something then it can be released on RDV! The music has to tell a story…this is something that I also try to do in my own tracks and sets.

15. What’s the best piece of advice you’ve been given in regards to your music career?

Nothing can be taken for granted!

16. What do you think the electronic music scene could do with or without right now to push it forward?

Nowadays the industry is more about what you do on social networks than the music itself. It’s really sad. I wish we could have like a year without Instagram or Facebook to see how it goes.

17. What were the last three books you read?

18. What was the last thing that made you really laugh and why?

19. If you could only listen to one record for the rest of your life what would it be?

The neverending record? I would take Life by Pépé Bradock.

20. What will you do after answering these questions?

Going to buy some food to cook for my lunch.