An original member of Underground Resistance (alongside Jeff Mills and Mike Banks), an innovator in […] 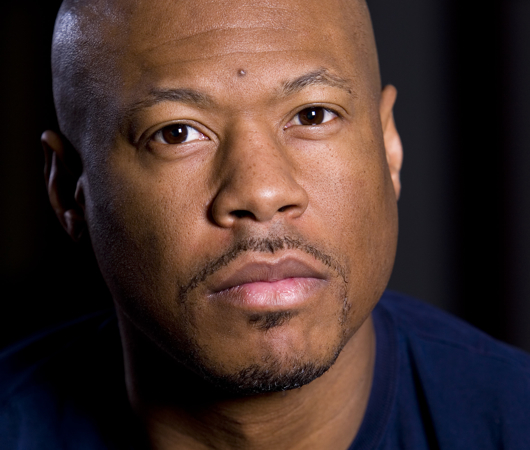 An original member of Underground Resistance (alongside Jeff Mills and Mike Banks), an innovator in […]

An original member of Underground Resistance (alongside Jeff Mills and Mike Banks), an innovator in Detroit techno’s heyday, and a pioneering DJ/producer with a 20-plus-year career that includes a wealth of ambitious projects including Floorplan and Monobox, Robert Hood has a resume that’s all but impeccable. Now, we can add another accomplishment to the techno veteran’s list, as 2014 marks the 20th anniversary of his M-Plant label, an outpost which has largely served as a home for Hood’s own excursions into techno’s evolving forms. With a number of upcoming reissues and events planned to celebrate M-Plant’s two-decade milestone in the coming months, we decided that it was time to check in with the Motor City legend (who now calls Alabama home) via our 20 Questions series. Hood kindly agreed to answer our queries, some of which prompted him to pull out a few choice tales from his storied past. Over the course of our discussion, he looks back at Underground Resistance’s early days, recalls the time when he “borrowed” a Kraftwerk record from Anthony Shakir, and describes his first meeting with Jeff Mills.

1. Where were you born?
Detroit.

2. What was the last great book you read?
In Pursuit of Purpose by Myles Munroe.

3. From start to finish, how long does it usually take you to finish a song?
It really depends on how the composition comes together. I have maybe 30 tracks that have been shelved for years, but I can also knock out a track in 45 minutes or an hour. Sometimes it’ll take weeks, sometimes months, that’s just the nature of it. But when you know the cake is ready, you know it’s ready. When it’s finished baking, you know it’s time to serve it.

4. Name a track or artist that you think is criminally underrated.
Mark Broom. He’s been so consistent down through the years. He’s a techno mainstay, and still going strong, if not stronger. I really admire Mark and his tenacity.

5. What is the most memorable DJ set you’ve ever seen?
I can remember a time I saw DJ Pierre play in Geneva, Switzerland, and it was just flawless. He’s one of my favorite DJs of all time. Frankie Knuckles is another one, and I had the opportunity to play with him in ’94 or ’95 in a small, tiny club, and what a treat it was to hear the master just put it down. I have fond memories of that.

6. What is the longest DJ set you’ve ever played?
About five years ago, I played a six-hour, semi-live set in LA. I just went through the classics—old-school Detroit techno, Chicago house, some old progressive tracks—and then I had my drum machine riding shotgun with me, and we played a marathon set just like that.

7. What was the first album you ever purchased?
I remember working at my uncle’s record store when I was about 13, and that’s when I first laid eyes on Kraftwerk’s The Man Machine. I didn’t buy it, but I ended up borrowing it from Anthony “Shake” Shakir—we had drum classes together in high school—so I borrowed it and never returned it. The first record I actually bought was Parliament Funkadelic’s “One Nation Under a Groove” or The Whispers’ “In the Raw.” I remember spending my lunch and bus money for the week on that record.

8. What is your most essential tool in the studio?
The Yamaha sequencers have been a mainstay in my arsenal. I started off with the portable QY100, and I remember programming tracks from X-101 on that pocket sequencer. Of course, I’ve used other hardware sequencers, but through the years, Yamaha’s QY700 series has been sort of my weapon of choice.

9. During an ideal DJ set, what is your mindset? Are you focusing on the dancefloor, getting lost in the music?
I try to communicate from my spirit to the crowd’s spirit. Not just to play records and not just to hype up the crowd—I want make them forget about their troubles. I want to take them someplace they’ve never been. Even to just take them to Detroit and show them the essence of Detroit and show them that sometimes we go through adversity, but it’s okay, it’ll strengthen you. I hate to sound so corny about this, but it’s a spiritual journey, it really is.

10. Do you have any nicknames?
My grandmother used to call me “Buster” when I was a kid. I don’t know why. And when I was growing up they used to call me “Hoo Hoo” or “Dr. Hoo Hoo.” The class clown saw me tinkering in my garage once and he said, “Look it’s Dr. Hoo Hoo,” and everyone cracked up.

11. What is the one thing you can only get in Alabama?
The cheese grits are very prominent down here. They’re big on that here.

12. As a former Detroit resident, what do you miss most about the city?
Just the essence of Detroit, the way the city moves in the day and at night. The sights and the sounds of Detroit—I miss the traffic, I miss the sirens, I miss the dogs barking, I even miss the gunshots that you would occasionally hear at night. I just miss the essence of the city and how Detroit moves through the expressways and into downtown and the different neighborhoods.

13. What’s your ideal day off?
To sit down, have a cup of coffee, maybe read a book or watch Sanford and Son or The Three Stooges. And then take a good nap.

14. What do you remember most about the early days of Underground Resistance?
We really wanted to create a movement, rather than just capitalizing on the hype around Detroit techno. I remember going out in force dressed in all black with our Underground Resistance t-shirts, and our berets and bandanas. I remember going to an army surplus store to figure out what we were going to wear on stage. We had a mindset that was sort of Public Enemy, X-Clan, Parliament Funkadelic, Guerrilla Unit.

15. What was your first impression after meeting Jeff Mills?
I remember very vividly the first time Mike Banks took me to his house. Jeff left the door open, so we just went inside and upstairs and I was looking around the studio at all the posters and records and there is this little guy behind a two-track tape machine, and he’s editing tape for The Wizard show. And I said to myself, “This can’t be the guy, I wonder where The Wizard is?” Eventually I found out he was Jeff Mills, and he was nothing like I expected. Jeff talked very fast and his movements were very sporadic, and watching him edit tape was a show in itself. You’ve seen him DJ, but the way he edited tape was like a performance; he was so fast and so precise, like a laser-point surgeon.

16. For someone who has never heard any of M-Plant’s releases before, is there a record you suggest they should start with from the catalog?
Protein Valve, which is the first M-Plant release. That’s the starting point—page one, chapter one.

17. If you could sum up M-Plant’s 20-year catalog with just three words, they’d be…
I’m going to borrow this from Underground Resistance: For the progressive.

18. What is the most worrisome thing about the current state of dance music?
Monotony. When we’re trying to imitate one another and trying to copy the latest trends, of course, it’s going to kill the music. We come from the school of the Electrifying Mojo and experimentation, and we really have to continue to dig deep within our own personalities to find something new.

19. What is the most inspiring thing about the current state of dance music?
I’m inspired by those certain few artists who continue to be artists and recognize the artistic integrity of techno music. Those that are not afraid to stand out and be exceptional. There’s just a small handful, but they are the ones that inspire me to keep going and continue to be excellent.

20. What’s the first thing you’ll do after answering these questions?
I’m going to read my Bible. I’m going to read a few scriptures and see what God would have me read that I can apply to my life.