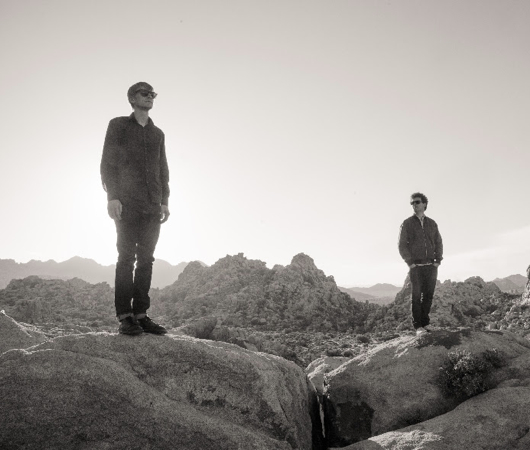 Somehow, Simian Mobile Disco has only gotten better with age. Initially emerging alongside—and somewhat unfairly lumped in with—the electro-house movement of the mid 2000s, the pair (consisting of synth-obsessed Londoners James Ford and Jas Shaw) has evolved at its own pace, forging a path which eventually landed on Unpatterns, the duo’s spellbinding 2012 LP and most accomplished release to date. In the two years that have followed, the group has only continued to gain momentum, as Simian Mobile Disco has refined its heralded live show while steadily releasing intriguing one-offs and collaborations via its own Delicacies imprint. Now, the pair is set to return to the full-length format, with its upcoming Whorl LP dropping in September via Anti–. The result of a live performance recorded earlier this year in Pioneertown (just outside of Joshua Tree National Park in the desert of Southern California), then mulled over and mixed back at SMD’s headquarters, the next chapter of the outfit’s saga is just around the corner. In the meantime, we’ve tapped Ford and Shaw for a quick session of 20 Questions, in which the pair talks about the sound at Robert Johnson, the headache of going through US customs, and the completely illogical location where Whorl was recorded.

1. Where were you each born?
Jas Shaw: Orpington In Kent.
James Ford: Leek in Staffordshire. Both are small boring towns.

2. As kids growing up, what was the first record that absolutely blew your mind?
JS: Mine was Michael Jackson’s Bad.
JF: Jimi Hendrix’s Purple Haze.

3. What were the first instruments you learned how to play?
JS: Violin
JF: The flute.

4. What would be your dream collaboration be?
JS: Nina Simone

5. Name a track or artist that you think is criminally underrated.
JS: Broadcast

Simian Mobile Disco setting up for a jam session in the desert.

6. What possession have you owned for the longest?
JS: My bike and my first guitar.

7. Of all the places you could have recorded the building blocks for a new album, why a saloon located in Pioneertown, California?
JS: We have been asked this a few times and, honestly, there is no logical reason. It just seemed like a good idea. It was inconvenient, expensive, made no sense, and I’m really glad we did it. It gave us a deadline and a focal point.

8. Is there a meaning behind the name of the album project, Whorl?
JS: There are many meanings to “whorl.” The one that led us to the word is that it’s a pattern of spirals or concentric circles which relate pretty easily to cyclical sequencer patterns.

9. Though you only used one synth and one sequencer for the recording of your upcoming record, is there a particular piece of gear that has been instrumental to building the SMD catalog?
JS: The bit of gear that’s been on the road with us the longest is one of the modular synths that we tour with.

10. What is the worst thing about visiting/touring the US?
JS: US customs. Guys, we know you have a job to do but be gentle with our kit, please.

12. Do you have any pre-performance rituals?
JS: No one actually does that stuff. It’s all lies.

13. From start to finish, how long does it usually take you to complete a song?
JS: Not too long actually, but that’s not taking into account all the tracks we ditch. We like to make lots of stuff quickly, and then choose the best tracks later.

14. Do you have any techniques for moving past creative blocks?
JS: Ditch it and do another. Don’t be precious.

15. What non-electronic records have you found yourself listening to lately?
JS: Murder ballads.

16. What would say is your ideal listening environment?
JS: Robert Johnson—small and perfectly designed.

17. If you went back in a time machine and played the 2007 versions of SMD the music you’re releasing now, what would they say?
JS: I think they would get it.

18. Are we alone in the universe or is there something or someone else out there?
JS: Like woah! Statistically, it’d be odd if there wasn’t other stuff out there. I don’t think they’d bother traveling all that way in a Jetsons-style flying saucer just to abduct hillbillies though. Seems a bit silly.

19. What was the last thing you Googled?
JS: We recently tricked someone into googling “gnat’s chuff.” They are definitely on a list now.

20. What’s the first thing you’ll do after answering these questions?
JS: Get back to mixing our record.