Often cited as one of the leading producers of breakcore, IDM, and other microgenres in […] 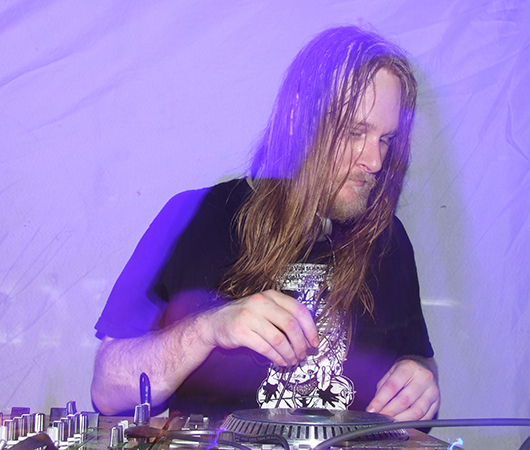 Often cited as one of the leading producers of breakcore, IDM, and other microgenres in […]

Often cited as one of the leading producers of breakcore, IDM, and other microgenres in that vein, it’s nevertheless somewhat parochial to label the music of Aaron Funk (a.k.a. Venetian Snares) with any kind of overly specific terminology. Over the years, his work has been inspired by everything from Hungary and Winnipeg to cats and surrealism, resulting in a diverse—and rather extensive—catalog. Still, the prolific Funk has been somewhat more selective with his output as of late, taking time away from the constant assault of the album cycle to dedicate himself to his collaborative Poemss project with Joanne Pollock, along with the editing and curation of My Love is a Bulldozer, his new LP as Venetian Snares for Planet Mu that dropped last week. Given the chance to speak with the reclusive Canadian producer, we tabbed him for our 20 Questions series and got him talking about love, music, coffee, and cats.

1. Where were you born?
Word is, I was almost born in a fire truck. I was born in Winnipeg, Manitoba, Canada at St. Boniface hospital in a blizzard.

2. What was the first album that you ever purchased?
I honestly can’t remember what the first record I bought was. I remember buying Waiting for the Sun by The Doors at a garage sale; maybe it was that. I had more records before that people had given me as a kid.

3. How has Winnipeg presented itself in your music?
Winnipeg has been a bit of a muse for me. I’ve been immersed in its atmosphere most of my life. I guess like any place, its quirks become a part of you—they’ve definitely become a part of my art. I really love the place, but I feel like I may have given people a bad impression of it. To me, it’s really interesting how many people living there diss it; they don’t know how good they’ve got it. It’s such a good city for artists—cheap rent, loads of space to do your thing, you can make a racket and there aren’t a bunch of people living on top of you telling you to shut up. I know for me, I wouldn’t be able to do what I do in many other cities; it would be a real struggle. Of course, there are the horrible winters, etc., but whatever, you deal with it. Do we really all need to be soft as fuck, sunning ourselves all year round?

4. When you leave home, what do you miss the most?
I miss making music when I’m away. I have a great studio in my place, so it’s strange not being able to go in there whenever I like—whenever I hear something in my head. I miss my cats too; they’re so nice. Sometimes I wonder if they are sad, and it gets me kind of down thinking about that.

5. Did you formally study music theory?
Not really, just some piano lessons as a kid, but I wasn’t too into that.

6. Did the limitations of your early production tools (OctaMED, Cubase) affect your production style?
Surely whatever I produce on must affect my production style—OctaMED on the Amiga really did. It taught me to make very little go a very long way. It was a good exercise, I’m sure. Limitation can be a real blessing, especially for someone just starting out; learn to make the most of everything! Sure, it has shaped my style in some significant ways; it’s translated to how I work now, how I can serve a tune. I don’t need to use every synth in my place just because it’s there. I just have a wider palette to draw from, depending what the music is asking of me.

7. What inspired you to dive into polyrhythms and unusual time signatures?
The odd time signatures always just sounded more exciting to me; rarely do I hear something in 4/4. To me, that seems so external—that’s what I hear when I go to someone else’s show or a club or something. It feels like it’s not mine.

8. A fair bit of your catalog could be described as quite “busy,” with complex rhythmic and melodic structures. Does that reflect your personality in some way?
Hmm, maybe it does. I’m actually quite a calm person on the outside. I meet a lot of people that say they thought I was supposed to be some kind of wild man. I’m really just making what I hear—maybe if I wasn’t doing that, I would be some really psychotic person, but I doubt it.

9. How many cats were involved in the production of your 2001 album, Songs About My Cats? What were their names?
Awww, it was four cats: Chinaski, Fluff Master, Bobo, and Kakarookee. Sadly, Kakarookee is the only one still with us. I have really fond memories of making that music!

10. How has your work ethic changed over the years?
I think I still make the same amount of music, I just barely show it to anyone anymore. In the early days, I would release so much music—it was really fun for me. Now, I keep most of it to myself. I am still that guy that will hide out for months in my studio, out of touch with the world. I’ve been having some interesting conversations with friends lately about how they haven’t been making much music because wherever they live is so distracting—always a party to go to, always someone inviting them out. I think a lot of people I know don’t bother inviting me to things, sometimes.

11. How has your party ethic changed over the years?
Oh, wow. I guess I’ve learned to navigate the partying side of myself a bit better. I think I’ve become more responsible. I feel proud of myself when I don’t drink a bottle of whiskey before a 10 a.m. flight anymore. Maybe I shouldn’t be proud of that—it seems like it should be common knowledge. It’s weird going on tour because essentially you are at a party everyday and everyone wants to party with you. You really have to hold back a bit to get through it all—gotta party poop my own afterparties.

My Love is a Bulldozer

12. The last Venetian Snares full-length was released in 2010. Why the long gap between albums?
Like I was saying, it’s felt more natural to just keep things to myself these past years. My studio took a shit on itself a few years back too, so I didn’t make anything for a while. I had to eventually tear it all down and put it somewhere else. I’ve really been enjoying my Poemss project with Joanne Pollock this past year and a half as well—half the time, I’ve been really immersed in that music. The next release will likely be another Poemss record—we’ve got so many rad new tunes!

13. What’s the story behind the title of the new LP, My Love is a Bulldozer?
My love is intense, my love will bust through anything in my way. Love, love, love! It’s powerful and it’s been propelling me forward. “Love will conquer all” sounds like the oldest cliché in the book, but it’s a common cliché for a reason. When you are in love, you really feel its power, you become unstoppable! It must be a universal right of passage.

14. You’ve worked with Planet Mu for more than a decade now. How has your relationship with the label changed in that time?
I’ve watched Planet Mu go through a bunch of different stages. They’ve been really good to me from the start. I feel really loyal towards the label, it’s got a real family vibe. So, it’s evolved from a label I am on to a label I really feel a part of, if that makes any sense.

15. Coffee or tea?
Coffee! So much coffee! I have a French press at home that I put way too many beans in. I leave it a bit longer than you’re supposed to, and it turns out like this thick and strong coffee. This week, I’ve been waking up and going for a coffee at this place in the market, then I go for breakfast somewhere and grab an iced coffee from another place on my way back. It’s rough though—I feel pretty stupid in the morning before I have a coffee. I quit for a while once, and eventually, when I woke up I was really clear and ready to go everyday. I’m back on the coffee though now; I kind of like the ritual of it I guess.

16. Apart from music, do you collect anything?
I guess I collect comic books. I’m not really like a typical comic collector who keeps them pristine and never touches them—I just like to read them. I have so many, I guess it could be considered a collection. I have this place I go to back home called Mighty Comics, and they put all the monthly books I like in a cubby for me.

17. What’s the last song you paid for?
I get a lot of music off Bandcamp these days. Surachai’s Ritual is a favorite right now.

18. If you could converse with anyone, alive or dead, for half an hour, who would you choose to chat with?
My lover. A nice chat in bed, everything under the stars—can’t beat those conversations.

19. What do you lose sleep over?
I lose sleep playing everyday at 3 or 4 a.m. and then going to the airport at 9 a.m. Sometimes I get crazy insomnia and can’t shut off the flow of thoughts. At home, I just go into my studio and play with synths. When I’m traveling, it can be rough because the little windows for sleep are really scheduled, so when you lay awake through them, it takes a toll.

20. What’s the first thing you’ll do after answering these questions?
Probably answer some more questions. Maybe another coffee first.