On the first spin through Cupid’s Head, the latest LP from Axel Willner (a.k.a. The […] 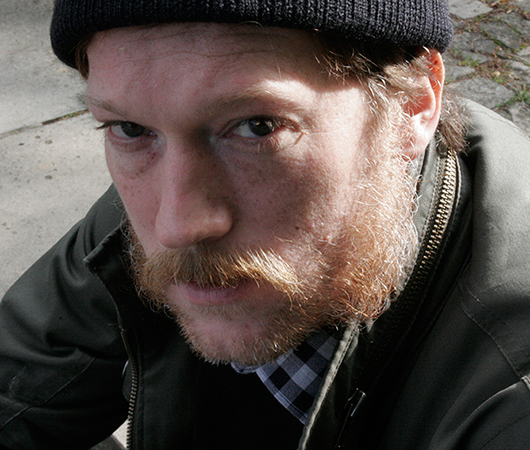 On the first spin through Cupid’s Head, the latest LP from Axel Willner (a.k.a. The […]

On the first spin through Cupid’s Head, the latest LP from Axel Willner (a.k.a. The Field), one doesn’t immediately get the impression that he’s been listening to a lot of Fela Kuti. Yet that’s exactly what the Swedish producer has been doing lately. “It’s funny, because that’s something you absolutely cannot hear on the album,” he says. While that might be the case, what does come through is still interesting—it’s a dark record, one that was born from a period of emotional tension and extreme burnout caused by touring in support of Looping State of Mind, his critically lauded third LP.

“Yeah, there’ve been a lot of things going on, but also nothing really. I’ve been going all over the place and coming home and taking it easy—taking it real easy,” he tells us via Skype from his home in Berlin. There’s a weariness in his voice that comes through in the way he trails off after his sentences. Willner has spent much of the past two years performing around the world, something that he’s enjoyed, though it’s taken a significant mental toll. Not only that, but the past two years haven’t been particularly kind to him personally. Though he doesn’t go into specifics, he says he’s been dealing with, “Just the normal personal drama that everyone has in their lives. Nothing bigger than that. But [those emotions] can really fuck you over from time to time.”

As a result, he found himself briefly divorced from music, unable to listen and unable to record. “I felt so drained,” he said. “I’d been into music since my [youth], listening to Motley Crüe and Black Sabbath. And now, being 35, I was like, ‘Fuck, I can’t listen to music right now, it doesn’t do anything [for me].’ I really thought that was it, that I [couldn ‘t] make music as The Field anymore.” This frustration lasted a while, but didn’t keep Willner away from music altogether. Shortly after the release of Looping State of Mind, he offered up And Never Ending Nights, Willner’s first LP under his Krautrock-leaning Loops of Your Heart alias. Simultaneously, he also regrouped with the members of his live touring band to form Black Fog, a separate project inspired by the synthy, ’80s-horror-soundtrack music of John Carpenter and Goblin. The darker direction of these side projects would later inform the character of Cupid’s Head, once he finally got around to recording it.

According to Willner, the path leading to the new album was full of doubts and false starts. He needs to feel inspired when he records as the Field, as it’s not the kind of music he can simply sit down and churn out. “It takes a lot of creativity, and that is nothing I can force.” he says. “When it comes to The Field, I can’t be like, ‘Woooo, now it’s time for The Field.'” I’ve tried to squeeze out a few Field tracks in my life and they were not the best. I love making music, but with The Field it’s special—if I don’t have the feeling for doing it, then it’s best to not bother to try.”

What finally brought him the inspiration he needed was the hardware in his studio, specifically when he found himself experimenting alone with some of his Elektron gear. “It just happened that I was sitting here in my studio, by myself, and I just kept going on,” he explains. In fact, the whole of Cupid’s Head was recorded on hardware, which makes it a departure from his previous three records, all of which were recorded using a lesser-known piece modular music software called Buzz. “It’s been mostly Elektron stuff. The Octatrack can totally replace the computer; I use it to manipulate the samples,” he says before rattling off a long list of vintage Roland synthesizers that are also in his arsenal. Though Willner previously enjoyed making tracks with his computer, he feels as though the change to physical equipment has been positive. “I’m just very happy I’m not using software anymore, because it was very limited,” he explains. “Buzz is a very fun program—I love it, I’ve used it since the late ’90s—but quality-wise, sound-wise, it’s not the best. With hardware, I don’t even need to mix [the sounds] because they already felt a bit more rich versus the old productions.”

Aesthetically speaking, the hardware influence is prominent from the first song of Cupid’s Head onwards, as the LP opens with a burst of obviously synthetic percussion that doesn’t let up until the album reaches its final beatless finale. Tracks like “They Won’t See Me,” “Black Sea,” and “A Guided Tour” all feature a machined, ’80s-house groove that contorts and hisses beneath his impressionistic sampling.

Of course, Willner’s switch to an entirely hardware-based set-up shouldn’t come as much of a surprise. In past interviews, he’s expressed his dislike of computers as performative tools, which was one of the reasons why he expanded The Field’s live show to include a touring band. Recounting his time in rock bands, he says, “There were a lot of people playing live with laptops when the third wave of electronic music came to Sweden in the late ’90s. It never really worked out for me to see that. Coming from the background that I’m coming from, a band was always more appealing. I think it’s a primal instinct of man to see a band stand and sweat on stage.” But with that said, when it comes time to tour for Cupid’s Head, he says he plans on performing it solo, albeit without a computer. “I really like to do the live shows with the band, but at the same time, with the gear, the sky is the limit. I can do it live by myself and still enjoy it, and I hope people [in the audience] enjoy it too.”

There’s little question that hardware is having an impact on Willner’s musical output, but Cupid’s Head is also an album that finds him tapping into a new source of inspiration—his own body of work. To begin with, some tracks find him pulling sounds from his various side endeavors. Take “Black Sea,” which begins in an airy fashion that’s typical of The Field, but eventually channels Willner’s Black Fog project with its usage of thick, ’70s synthesizer arpeggios, plunging the tune into a deep feeling of heavy paranoia. Elsewhere on the LP, other songs have motifs that remind Willner of works he recorded years ago, before his music had found a broader audience. He mentions “They Won’t See Me,” the record’s opener, and how its droning organ is reminiscent of an ambient track he recorded very early in his career but never released. Considering the creative rut he was once mired in, it’s somehow heartening that Willner’s new album helped him find a way out by drawing so heavily upon these assorted bits and pieces from his past. He recognizes this, looking at the record and saying, “Every track has pieces [of things that have] come back in different shapes. It’s like a little bit of a revival of my own music for myself. It’s been very nice to hear that.”