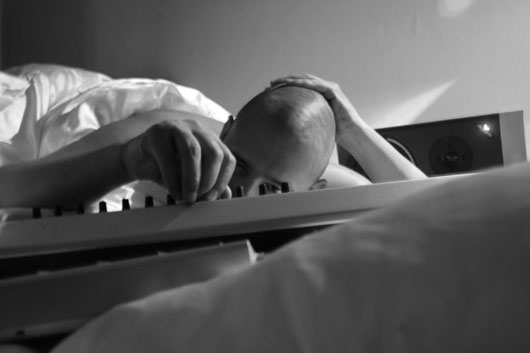 Danny Yorke lights up a spliff in his London flat and takes a patient puff before telling me about how he remixed Ikonika, released two artist albums, and is auditioning tracks for his Eye4Eye label’s next release. It’s been a busy 2010 so far; maybe he deserves a smoke break. But the 30-something producer, better known as Altered Natives, is also calculated, pausing like a chess player contemplating his next move.

The reticence might have something to do with his admitted bad-boy past as a graffiti writer who left home at 16 and formed a hip-hop crew in North London. Or maybe it’s that with song titles like “Eating Drinking Fucking Sucking,” “Cut, Slash, Mutilate,” and “Rage of Aquarius,” he has to clearly explain his motivations. Yorke is a rule-breaker who eschews London music scenes, but has been embraced by broken beat, house, and bashment circles thanks in part to his 2009 single “Rass Out” (Fresh Minute), which became an anthem as the UK funky scene exploded.

He’s come a long way from his days in the early ’90s making hip-hop and discovering acid house and jungle. Inspired by Hackney artists like Overlord X and Shut Up And Dance, Yorke began producing his own tracks with an MPC-60. He made hip-hop with his group The Heretics and then bruk riddims as Da Altered Natives for Broadcite Recordings. After a few compilation appearances in 2004-’05, Yorke issued his ’08 solo debut, A Thousand Days of Patience. “[That album] was like my tombstone to my time at Broadcite,” he explains. “I spent 1000 days with them and my patience was up. But it’s all good.”

No, he’s not afraid to speak his mind, musically or otherwise. His music is filled with gritty drum patterns, sharp lead synths, and stabby basslines; he even released a track called “Goya Owes Me Money,” which name-checks a defunct UK music distributor. “The music I make is quite personal,” he says. “I’ve been that demon in my tracks. They reflect my current status in life. Some of the music that I like most is really quite dark.”

That heaviness comes through both on his gully house album Tenement Yard Volume 1 and the noisy bruk-beat vibes of Serial Vendetta, both released this summer on Eye4Eye. Yorke’s tracks have a London edge and a sinister groove that sounds especially good on large speakers. While Serial Vendetta‘s title doesn’t necessarily signify ill intents—it’s an anagram of Altered Natives—other titles have a more literal meaning. “Eye4Eye is a reference to taking my own fucking life back,” Yorke says about reclaiming his autonomy post-Broadcite and charging ahead with new output.

Now he has set his sights on more of everything: remixes, new aliases, and a new EP featuring fellow UK producers Ceramic, DJ Grayz, and Funkstar. He’s also completed tracks for Tenement Yard Volume 2, a single for Martyn’s 3024 label, and hopes to release music on Hyperdub in 2011. “I’m constantly working,” he says. “There will never be a shortage of music—it’s a matter of whether people will get bored of it.”

Serial Vendetta is out now on Eye4Eye.