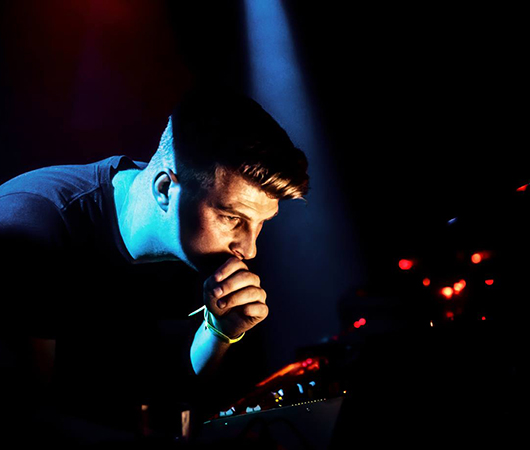 Tony Williams’ Addison Groove project blasted into the dance music arena in 2010 with the massive “Footcrab,” and the Bristol-based producer hasn’t really eased off the throttle since. Over the past few years, he’s issued two albums, along with a flurry of singles and EPs, the most recent being last month’s ‘Turn Up the Silence’ for 50Weapons. During that time, he’s obviously been a key figure in marrying the rhythms of footwork to the bass-heavy traditions of UK dance music, and he’s also become renowned for his mastery of the fabled Roland TR-808 drum machine. Curious to find out more about some of the methodology behind his furious work ethic, we’ve enlisted Williams for the latest edition of ‘Artist Tips.’

Mixdowns
These should not take too long really. If you’re spending a week to make a hi-hat and a snare sit [together], then I very much doubt an EQ or leveling will fix it. It’s usually because the sample or sound you used just isn’t working. I try to start with high-quality samples when I start a track; that way, I’m spending less time making them work if they need repairing in the final stages of a tune.

For drums, I’m using mostly an 808 in my tracks; thankfully, this sound pallet is so strong that it requires very little work when mixing down. I own the real thing, but I have it all sampled, so I don’t really use the actual machine when making a tune these days. To get it sounding mighty, I record it through a Mackie desk and into a UAD Apollo through a preamp such as the API one. Once that’s all in my computer, it makes my music-making time a lot shorter and my mixdowns easier because the original source is of high quality.

If you don’t own an 808 or a UAD card and use Ableton but are struggling to make things sound good and loud, then maybe try using it in ReWire mode by using another DAW as a mixing desk. I use Logic and Ableton in ReWire because for me, I can get a decent sound. It’s fairly easy to set up and when you do, just make it a template so your workflow is quick.

Quality Control
Imagine you made a tune that was so good, every DJ out there needed it to play this weekend. Now imagine that for the last year or three, you’ve been busy learning to make your beats, and when you made a tune, because of your impatient excitement (yes, I used to have this too, I understand), you’ve been sending the tunes to the right people, but they are simply getting pissed off with seeing your name in their inbox because you send out every thing you make. Now, that huge tune you made will be unlikely to get picked up because you have given yourself a reputation as a serial emailer.

It’s important to control the quality of what you send out. If you have 10 amazing tracks, then they deserve to be heard, but the best way to get 10 tracks listened to is by sending out just one or two. With MP3s, it’s so easy to get music around the world now, but it’s also easier to not get noticed. Often I get sent demos and inside the ZIP file are 20 tracks. After 10, it all becomes a bit of a blur to listen to.

So my message here is: send out the best stuff you have. Even if you have a bunch of bangers, just send out a few. It will have a much higher strike rate of someone getting back to you with feedback or it being played in the clubs. I’m guilty of not giving feedback, but if the tunes are good, I’m sure I’d go out there and play them as much as I can if it’s fitting in my DJ sets.

Hardware
Although not necessary, it’s usually a good idea to own some kind of hardware equipment. Drum machines, mixing desks, guitar pedals, and just random sound generators give you a better idea of how music can work outside of the computer. One thing I like is to have my 808 and Juno always set up for a jam session. For some reason, having the freedom to move around when crafting something is quite liberating and you hear the music a little differently rather than being fixated on your monitor. Even a decent MIDI controller can give you this.

EQ
The most used processor in any of my tracks is the EQ. I’m forever trying to find the best one. But there are different ones for different purposes. Rather than explain in too much detail what my favorite ones do, below I’m going list my top three EQs to use.

Adds amazing color and character to any sound.

Most transparent EQ I’ve heard in the box.

Can be used as a regular filter as well as an EQ; very quick and this was my go-to before the Waves one replaced it.

Other Music
I spend 90% of my time listening to music that’s not easily found. On a usual day when we listen to the radio, we hear trap, R&B, house, hip-hop, etc., but radio stations don’t really dig much deeper unless you’re listening to BBC Radio 6 or some obscure student station, which we all can’t most of the time. I go through phases; one week I’ll be listening to some Angolan stuff from the ’60s, then the week after some jazz from ’20s. I do that because I genuinely like that music, but it’s also a way to not copy other people. I believe it’s important to keep up with what’s new, that’s part of my job as a DJ and as a music lover, but if I did that all the time, I’d find myself copying other people’s music. Take inspiration from other music and don’t make exact copies. Through your influences and tastes, your music will have its own character.