The Cuban multi-instrumentalist gives some tips on removing the computer from your workflow. 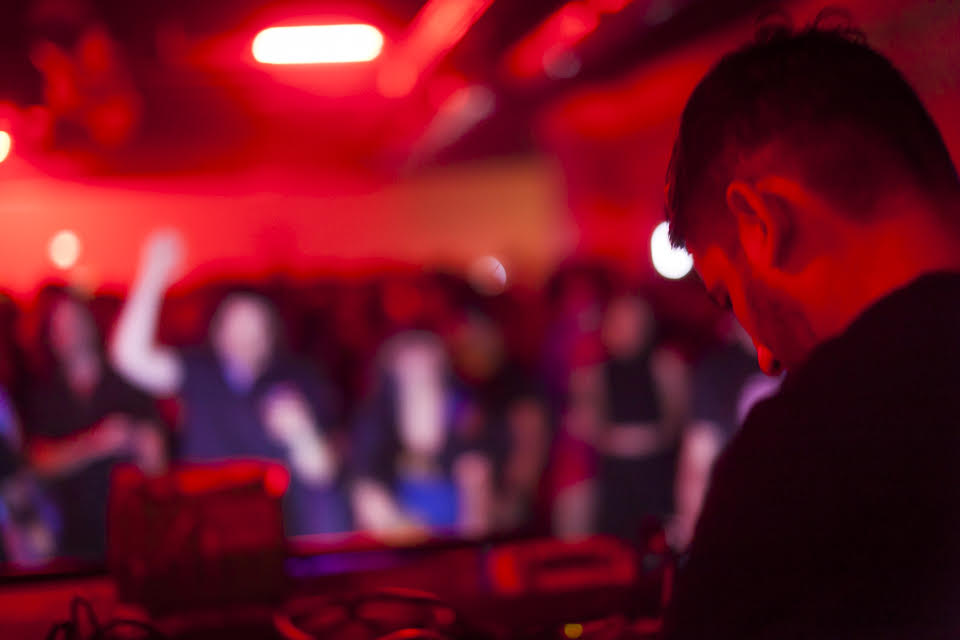 The Cuban multi-instrumentalist gives some tips on removing the computer from your workflow.

Born in Miami to Cuban immigrants, Alpha 606 is the project of Armando Martinez, a multi-talented multi-instrumentalist. The group was founded by Armando and Rey Rubio in 1998, and they were joined by two more percussionists in 2003. Although they have since parted ways, the group put out several records together, debuting with the Computer Controlled ‎12″. Armando has since continued touring and performing solo as Alpha 606, pushing what he calls “Electrónica Afro-Cubano,” a dense and colorful sound that melds advanced electronics with intricately played live hand drums. Last year, he released Afro-Cuban Electronics, a seven-track LP via Detroit-based Interdimensional Transmissions. In this week’s Artist Tips, the Cuban multi-instrumentalist gives some tips on making music without the use of your computer.

Removing the computer from my production process has allowed me to hear a bigger “image” of my music. This is something I would suggest to anyone who has been producing “in the box” for too long. Removing the screen from in front of me forced me to listen with more focus to my music because I had zero visual cues. Just because a waveform on the screen looks like it should sound good doesn’t mean it always does.

Another issue you may have experienced is that staring at the screen causes eye fatigue and this inevitably results in shorter studio sessions. Just giving the PC a break for a bit, at the very least, may provide you with a reimagined approach to software music production once you return.

But how do you produce and record tracks with no computer?

Below are the tips for those wishing to build complete tracks only using external gear.

Get your Hands on a Four-Track

Pick up a cheap four or eight-track tape recorder, like most of us had back in the day. It will bring a level of simplicity to your process that you might find refreshing. In limiting your track count, an ear for spotting elements that detract from a track is fine-tuned because there just isn’t space for everything. You develop the habit of quickly letting go of anything that doesn’t add a vital component to the song. Become disciplined and force yourself to complete tracks using this and you will gain valuable production experience and perhaps some decent tracks in the process.

With most software having unlimited tracks, it’s too easy to just add another channel to add more excitement to an arrangement, instead of focusing on making three or four elements sound incredible first.

Many of my favorite classic tracks from the ’70s and ’80s were done with a limited amount of tracks. These songs rarely went over 24 tracks even with the inclusion of multiple channels of vocals and effects and many times up to eight drum channels.

Striving to convey your ideas with fewer elements is obviously not limited to a non-computer workflow; I have, however, found it too big of a temptation to overdo a nearly completed track on a computer, by adding yet another unnecessary VST chain to make it all “better.”

With the computer off, it’s gonna be pretty hard to use those VSTs. Now, let’s go hunting for that old keyboard lying around the house to generate your bass line. If you don’t have one then I would suggest buying an old analog synth. It may not sound very exciting at first, but if you push through the initial boredom you will typically yield unique sounds.

I would recommend grabbing something along the lines of what I use, the Roland SH-101. The SH-101 has now exploded in price but it was $300 and unpopular when I got it, so I’m sure there’s another synth out there for you. This was my only sound source for a long time. In being limited to only one synth, I learned a lot about each one of its functions and a great deal about subtractive synthesis in general. I suppose also because of the analog circuitry, I have never been able to generate a bass tone as punchy and with the types of harmonics it generates, from a VST, so that was a huge plus.

I learned how to synthesize most mono instruments on the 101 and generated a drum kit with kicks, snares, hi-hats, and conga sounds and sampled them. I also created interesting chords by sampling multiple individual notes, with sound variations in each note, into the sampler. So yes, onto the next crucial piece of your compact hardware setup: the sampler.

With an external sampler/sequencer or a drum machine, you can push the limited “classic” workflow even further. Instead of multi-tracking, you can instead build your song inside your sequencer and perform and record it stereo into your recorder with no extra passes or takes.

Too often, producers are making patterns and beats that unwittingly sound similar to others producing with software. Since most of these DAWs use the same cut/copy/paste sequencing tools as their competitors, it becomes a challenge to sound original. There are always those who can still break the mold using software, but they are the exception.

With a sampler/sequencer or an old boss drum machine with a guitar pedal, more authentic rhythms and sounds are easier to come by. When you develop this further with a sampler, very powerful kits can be created and stored.

Go Easy on the EQ

A huge advantage of this less is more workflow is definitely your EQ programming. As there are fewer sounds competing for space, there is more room for each sound to breathe. Each sound can be lightly sculpted closer to its original sound and without too much altering of its original character.

There are many sound systems at large venues which excel at highlighting music with less going on. With fewer frequencies fighting in your music, mixing in a chaotic live situation with the uncontrollable acoustics of the venue, becomes much easier. Unless you have a really nice EQ channel, rarely will boosting EQ improve the sound without introducing unwanted artifacts.

Some higher end EQs, however, may add a desirable color to the sound. It’s important nonetheless to first make sure the original sound source is sculpted how you want it without EQ being needed. Use your EQ pots instead to remove gain from trouble frequencies rather than boosting, then raise your channel volume for makeup.

Learning an instrument can be a life-changing experience for anyone. When I first started writing and singing songs on the guitar as a teen, I was captivated by being able to get a depressing feeling or a bad sentiment out of my head and into a song. All of a sudden, it seemed as if I was able to observe these feelings from the outside looking in. I could best describe it as what happens during meditation when you teach your mind to simply watch and not react to troubling thoughts as they arise and they will effortlessly pass.

I regularly use the guitar to capture and work out melodies and ideas quickly without having to plug anything in. A piano is great as well, just without the portability.

Although our phones now have instruments of all sorts, they do not offer the satisfaction of an acoustic instrument with a sound chamber like the guitar, piano, or hand percussion. Spending time focusing on learning an instrument also creates a special connection with you and the music you make with it. Learning percussion like bongos, which you can take anywhere, will greatly help your beats and add new rhythmic creativity to your patterns.

Getting your hands on some Eurorack modules could lead to an inordinate amount of fun. Oddly enough, as intimidating as it may seem to understand the myriad of cables and the difference between CV, Gate, VCFs, and VCAs in modular synthesizers, you are in fact simplifying your sound generation. Since you are buying the individual root components of a synthesizer, you have a lot more possibilities with sound design. Even simply patching cables in different ports and experimenting and sampling accidental sounds typically produces extraordinary results. It may appear daunting at first but instead of littering your track with a million VST sounds, one well-sculpted tone is much easier to arrive at with a modular synth. Even with a digital module, its DSP is solely dedicated to the function of the module.

In computers, the same DSP for your synthesizer is having to process many other background processes. It’s easy to see how the CPU availability for your sonic adventures with a modular is that much more abundant.

When making your first modular purchase, consider you will also need to buy a power supply or a powered case for your modules. Spend around a $1000 and you can have a powerful modular synthesizer with very open-ended architecture. But you could definitely get started with $300 for a simple, used power supply and oscillator to get things going and sampling away.

By sampling and chopping up the sounds from the modular to your sampler, you will have more control of your rig than with a CV sequencer. This is because one small touch of a knob on the module and the CV values you programmed in your sequencer have now changed. This is one of the only few downsides with modular song creation, which is why I suggest complementing your modular with a sampler/sequencer.

My first purchase for modular was the Social Entropy Engine eight-track MIDI sequencer with the CV expansion board. It is extremely fun controlling modules with CV and gates programmed on the engine along with the internal LFOs; the only issue is when you want to replicate that again, it’s difficult. Others see the impermanence and improvisational aspect of modular as the true beauty of it and I can see that as well.

Periodically Switch Up Your Songwriting Approach

It took me a while to realize that I always started creating a track the same way, with a kick drum. Now I sometimes start with a melody, chord progression, or even just a texture. Lately, I’ve been building the rhythm section first with the Cuban clave and adding instruments from there.

There is no right and wrong way to start a song or idea. Some say you need to have the song in your head first, and although this certainly does happen, tinkering and experimenting with new sounds can lead to musical directions you quite possibly would not have had otherwise. Start a new track differently next time and you might be pleasantly surprised at the ideas it inspires.

Bring It All Together

Once everything is up and running, the simplicity of limited machines might be a breath of fresh air for you. Even if you decide to return to software production in the future, the new skills and techniques acquired from having to work with a limited setup will be of enormous value for you as a producer.

Alpha 606 will be performing live at next year’s Comunité Festival in Tulum, Mexico. Also on the bill are Rhadoo, James Holden & The Animal Spirits, Lawrence, Vlada, Auntie Flo, and many more. More information can be found here.