Yesterday, we published part one of our extended conversation with electronic-music veterans Kevin Saunderson and […] 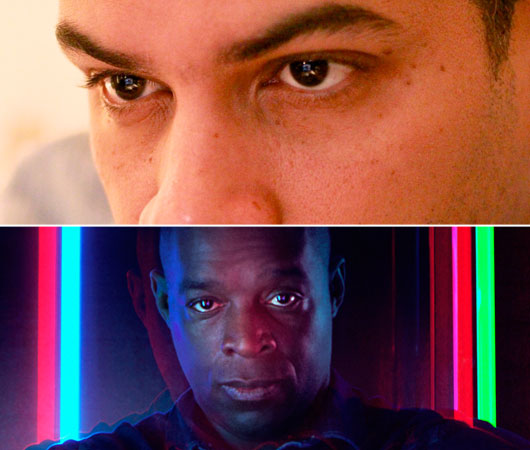 Yesterday, we published part one of our extended conversation with electronic-music veterans Kevin Saunderson and […]

Yesterday, we published part one of our extended conversation with electronic-music veterans Kevin Saunderson and MK (a.k.a. Marc Kinchen). In the second half of their lengthy exchange, the artists discuss the major labels’ retreat from dance music, the legacy of Detroit, future plans, MK’s move to the pop world, and how Pitbull brought him back to house music.

XLR8R: Once dance music started to move away from the major-label world in the ’00s, how did you deal with the transition?

KS: I had really only dealt with the majors with Inner City, and a little with Reese Project, too. I never really had a great experience, even though Virgin in the UK—it was [actually] 10 Records, they were independent, but they were part of Virgin, so they ran it more like an independent. So, for me, it didn’t really affect me too much. [The music] I created, it was what I wanted it to be. The majors basically found a way to fuck shit up, to be truthful. There wasn’t a real big downside [to those labels moving away from dance music], to me. I thought maybe it would be better for independent dance music.

MK: For me, during 1997, I pretty much gave up house music. As a remixer, I thought my time was limited. I wanted to do more pop stuff, mainstream stuff, rap, R&B. I ended up meeting Quincy Jones and working with him. Quincy put me with a bunch of R&B acts. I got a song deal with RCA for 10 songs, where they paid me up front, so I was working on SWV and Snoop Dogg. Once I got there, I didn’t even look back, and because I didn’t DJ, by the late ’90s/early ’00s, I didn’t even know what was going on in the house world. I was a ghost during that time.

XLR8R: So Marc, what prompted you to eventually get back into it?

MK: When Pitbull sampled Nightcrawlers’ “Push the Feeling On” for “Hotel Room Service.” Pitbull’s A&R is basically a house head. He has all my records, when I don’t even have them all. He knows about me. He knows about Kevin Saunderson. He knows about Kenny Dope. This is coming from Pitbull, who’s rocking with Ying Yang Twins. Once I saw how well that song was starting to do, I started to have a feeling that house music might make a comeback. That’s how I got back into it. Pitbull convinced me to get back into it, to be honest.

XLR8R: This goes in waves, but it seems that, as of late, there’s been a resurgence of people hailing Detroit and Detroit techno.

MK: I know why. The Dutch sound and the UK sound has had such a big influence over the past couple of years—[artists like] Afrojack, Laidback Luke, Chuckie—but, to me, there’s no soul in it. I’m not dissing it, because they’re all my friends. Coming from Detroit, I know how much soul is put in a record. From the beginning, I’ve always noticed how much, especially in the UK, they love music with soul. After so many years of synth stuff and that certain Dutch sound, that soul is missing from house records. It needed to come back.

XLR8R: Do you feel like Detroit is still a vibrant center for producing dance music?

KS: We’re still around. I don’t know if there’s enough new young talent coming through. There is some. As far as a scene here in Detroit, there’s not a real big scene. There’s nothing that kids can really be inspired by. That’s the real problem I see. We have the [Movement] festival, that’s once a year. But if you’re talking about a continuous basis, I don’t see it so much, but I know we still have a lot of people who are still around and still making music, good music. Carl Craig, Kenny Dixon, Stacey Pullen, the young cat Kyle Hall, a few others. It’s still active. It’s quality, but I don’t think Detroit has the impact it used to have. But, people are going back to older Detroit music, so we’re impacting it that way. People do always want to sound like us, and re-copy what we’ve already done.

XLR8R: Marc, do you have much of a connection with Detroit anymore? Does it matter that you’re rarely associated with Detroit?

MK: I haven’t really been to Detroit in so long. I don’t really know the connection there. I always thought that my sound was not really Detroit techno, as compared to Kevin, Juan [Atkins], and Derrick [May]. So, I don’t really know. It seems like when Detroit is mentioned, the people usually mentioned are Kevin, Juan, Derrick, and Carl. I’m really not mentioned in that group. That’s fine. I had a deeper sound. I used a lot more piano, a lot more organ than people in Detroit use. That sound tends to be more garage than techno.

XLR8R: Both of you guys have been around for decades, and people use words like “legend” when talking about you as artists. How does that affect the music-making process?

KS: It doesn’t really bother me. I make [music] because I like it. I enjoy it, and I don’t worry about anybody being critical of what I’ve done. I’ve done so much in history to inspire people, so much that I’m pleased with and proud of. I don’t have to have another hit record in my life. That’s not what’s important to me. What’s important is that when I do make a track, and I enjoy it, I want to share it with people.

MK: Exactly. When I make a track, I don’t care about who likes it. I can’t, to be fair. As long as I like it and I’m happy with it—that’s what I’ve done from the beginning. As far as being called a legend, I see it in print or online and it’s flattering, but it doesn’t affect how I work.

XLR8R: At this point, what gets you guys excited or inspired to keep making music?

KS: Traveling. Seeing people be inspired, whether they’re young or old or just finding out about me. I get re-inspired from that, always. Starting Inner City back up came from touring. The reason we toured was just to get a feel, see what was going on. Some of the shows we’ve done are quite amazing, how the people responded. That was the key for me.

MK: When I went to England last month, the biggest records I played were my records. Seeing that reaction, and I was definitely the oldest guy in the club…

KS: And he’s younger than me! [laughs]

MK: Everybody was like 20-24. I would play an MK record and that was the biggest record I played all night. That’s what inspires me to keep doing it. I didn’t know that, because I didn’t DJ too much in the ’90s, so when I was peaking [as a producer], I didn’t know that. I had no idea.

XLR8R: Speaking of that, both of you are known more as producers, especially at this point. But given that people don’t buy records in the same way they once did, it creates an increasing need to go out on the road to earn a living. Is that true for you?

KS: DJing and playing helps because you’re out on the road and you’re making more money. The music seems more like a promotional tool, compared to how it used to be. But I never stopped DJing. I’m always DJing. I just seem to still tour and travel, because I enjoy it for one, but because it helps pay the bills, too.

MK: For me, the difference now is that remixing doesn’t pay the same, but touring does. I’ve been being asked to DJ my whole life, and I always turned it down. But now, the money is so good, you can’t really turn it down. You get five, 10 grand a night, how can you really say no to it? Putting out records is just another tool to keep demand up for you to be playing somewhere.

XLR8R: If you could just be in the studio all the time, would you be happy just doing that?

KS: I like a balance. I started out as a DJ. I used to go see Larry Levan play. I used to go see Ron Hardy at the Music Box. I used to hear Frankie Knuckles play. I’ve got a history, and part of that inspired me to become a DJ first, and then create the music.

MK: I like DJing now, but I’m only going to travel once or twice a month. I can’t spend my whole life on the road. I can’t do it.

XLR8R: What projects or releases do you have in the pipeline?

KS: I’ve got an Inner City record, “Future.” That came out December 7, a brand-new single.

MK: That’s one of my favorite records right now.

KS: It’s happening. It’s got some great remixes, and we’re just bringing it on. I’ve also got the In the House mix compilation CD coming out with Defected, and I’m working on a new E-Dancer record.

MK: I have the House Masters compilation that just came out. I just remixed “Look Right Through” by Storm Queen on Defected. That’s coming out. I’m remixing Inner City’s record. The Chez Damier mix, I’m doing a new mix of the MK “NY Dub.” I’m actually recording a new song for an MK and Alana record tomorrow. And then, there’s everything I’m doing with Hot Natured. I have a song I did with Jamie Jones and Lee Foss on the Hot Natured album. I’m working on some remixes with Lee Foss on a couple of new acts. I have Willow Smith’s new single, “Fireball,” with Nicki Minaj. I have Pitbull’s new single in February, called “We Can Get It Started.” There is a lot going on.

XLR8R: Working with artists like Willow Smith and Pitbull, does it give you the same kind of charge that house music does?

MK: No. [laughs] Sometimes. It’s different. It’s two different spectrums. As far as the pop stuff, it’s pop and it’s mainstream, so you just look at it as that. Some people are going to hate it. Some people are going to love it. It’s actually strange, because doing stuff for Willow or Pitbull, you have people that talk negative and some people that are positive. But the MK stuff I’ve done, I don’t think I’ve ever heard a negative response to it. The MK stuff is more of what I am as an artist and producer, and people seem to appreciate it, so I guess that makes me feel better, even [better] than doing a song for Willow or Pitbull.

XLR8R: Kevin, do you ever have any interest in doing anything that pop?

KS: I’m more on my own projects. If something comes up, you never know, but I’m not inspired to really do anything on that kind of level. I’m fine where I’m at and being creative in my own kind of way and being uniquely different.

MK’s House Masters and Inner City’s “Future” are out now on Defected.