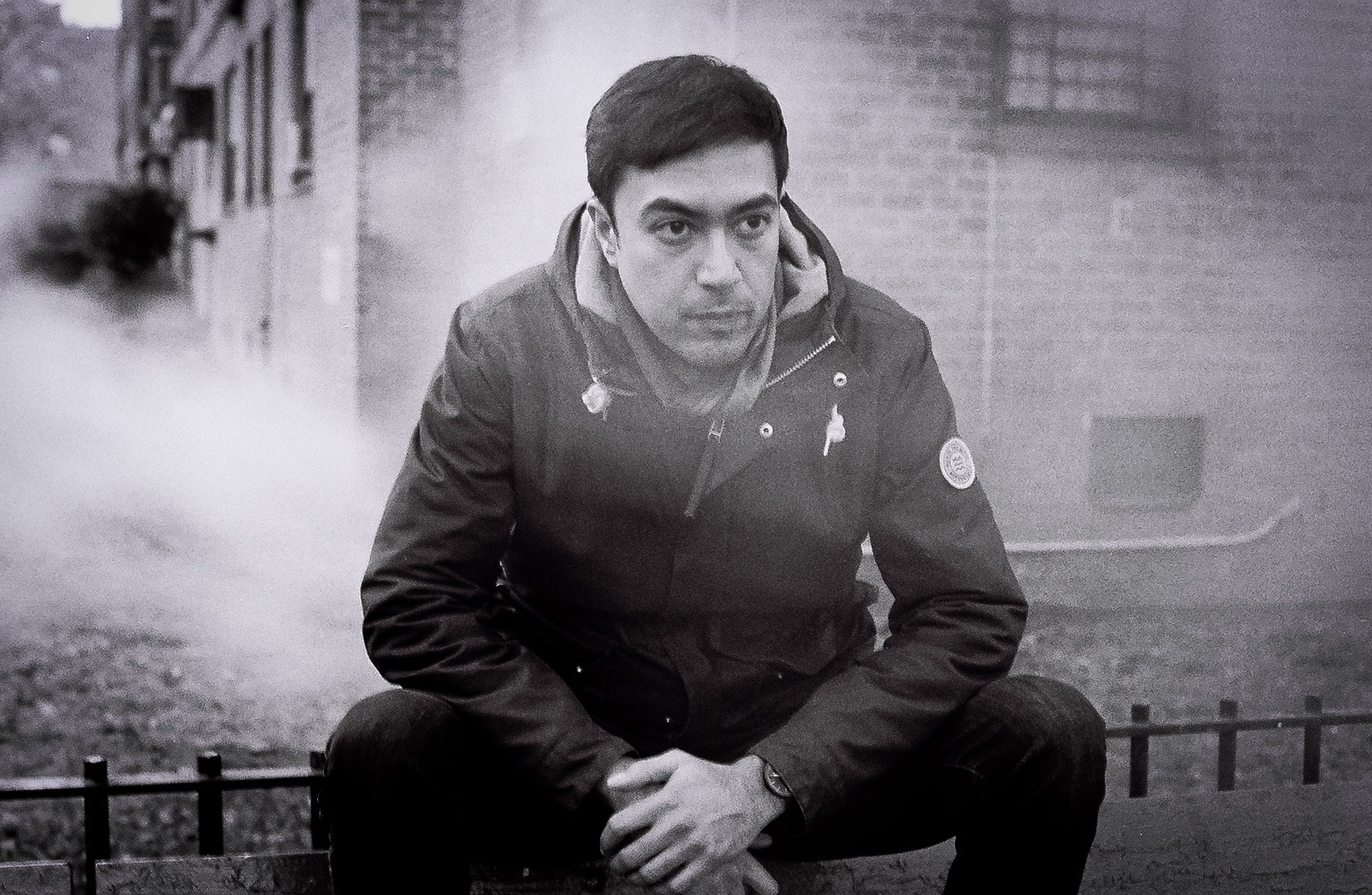 He might be best known as one half as Sepalcure with Travis “Machinedrum” Stewart—but Praveen Sharma is a formidable producer in his own right. The man behind the long-running Percussion Lab collective, he first hit the production scene via some charmingly low-key IDM–tinged workouts, released in the mid-’00s under the Praveen moniker; later, he teamed with Thomas Meluch, making lush sounds as Praveen & Benoît. But it was in 2011, recording as Braille, that Sharma hit his solo-artist stride. Laying down a series of hazy, hallucinogenic dance cuts for Rush Hour, Hotflush and Glass Table, Sharma managed to carve out a niche on the phantasmal end of the house spectrum that was all his own.

In February, Sharma put out the Everybody’s Crazy EP for the Friends of Friends label. It’s a release that saw him both slowing down the tempo and obliquely baring his soul, hinting at the kind of heartbreak emotions each of us knows all too well—but that was just a stepping stone on the way to his new full-length album, Mute Swan, also released on Friends of Friends. Featuring guest turns from Body Language’s Angelica Bess and Seafloor, Jesse Boykins III, Throwing Snow, and Olivia Sholler, Mute Swan is a beautifully poignant work, expanding upon the dreaminess inherent to Sharma’s solo material and draping it over a swooning R&B–esque framework. On the eve of the album’s release, Sharma was quizzed by production partner Stewart about the album, and about the emotions behind it

Travis Stewart: You used to make music under your own name, and that music was largely organic in nature, but going through an electronic filter. What was the purpose behind starting Braille?
Praveen Sharma: Yeah, “organic in nature, but through an electronic filter” is a good way to put it, actually. It was some really personal stuff that I wanted to put out. It was actually through doing this that I learned there was a whole world out there that wanted to hear dance music that had emotive qualities. And I’ve always loved house music, so I just naturally gravitated toward that. We had a lot of downtime—Sepalcure was between releases—so I thought, why don’t I just keep making dance music with emotive qualities, but a little more focused on the dance floor than I was before? So initially, Braille was supposed to be house music.

Stewart: You’re into a lot of different styles of dance music. Why specifically house music?
Sharma: House music speaks to me because it speaks my love to dance, my love for emotion and soul, and for its timelessness. Throughout my entire life of enjoying electronic music, I’ve always loved it. And it was an experiment for me—like, let me make some dance tracks! Of course, as happens whenever I try to make anything, it turned out all sorts of bastardized. It still hit the notes that I wanted it to hit, though. And that was really the initial purpose—just make some straightforward dance tracks.

Stewart: I think that making house music is often inspired by deejaying, and seeing what works and what doesn’t work. It’s definitely a learning experience.
Sharma: I still try to play some of those old Braille tracks into my sets, at least the housier ones—and it’s tough, man. [laughs] One of the reasons my new change of pace came about was that even when I was trying to do dancefloor tracks, that’s not really where my head was at. They always meander a bit too much to the melodic side, and you’re really trying to run that dancefloor from behind the decks, those tracks are tough to mix in. I’ve heard that from other people, and I’ve experienced it myself when I’ve tried to mix in a track like “Riverbed.”

Stewart: I want to talk about the album now, but first, I wanted to ask you: Is there a meaning behind the name Braille?
Sharma: I was trying to have something that wasn’t tied to Praveen, or Praveen & Benoît; that stuff was all IDM, ambient or whatever, and I wanted to do something different. I started going through all these names, and I landed on “Veil”—but then I thought, that is the most ridiculous name ever. So then I just started rhyming it, trying to figure out what was better, but had the same vibe—and I fell on “Braille.” When I landed on it, I was like, I feel it.

Stewart: How about the name of the album, Mute Swan?
Sharma: Well, you know that I was having a rough time when I was making the album—emotional things, breakup things, the most clichéd things in the music world. There’s this fantasy world, which some people seem to achieve, but the majority don’t—finding that one person, that lifelong partner or whatever. The mute swan is a bird that mates for life, and that’s really where it come from—it’s the feeling of having a connection with someone for life. That idea is where the title comes from.

Stewart: That might explain why a lot of your older material that came out on Rush Hour, Hotflush and Glass Table had a more celebratory, cheerful feel—whereas Mute Swan, for the most part, has a slower, brooding feel.
Sharma: Well, that Rush Hour release, “The Year 3000” was an important moment for my production career. It was like, oh shit—I made a track for the dance floor, but was also really relevant to me. But as I went on, I started feeling that some of the music, especially with that Glass Table release, was being muddled by emotion. I realized that you really have to clear your heart out before you’re ready to make dance tracks. I mean, I personally love a lot of emotion in the music I hear in the club. But I’m a rarity, and I’m not sure most people need to hear that. They don’t need to hear dance music mixed with heavy emotive stuff. I was aware of where my music was going—and it wasn’t going anywhere positive for the dance floor. I had a lot of shit going on, and I had to get it out in an honest way, and that way was not by making dance tracks. After the Glass Table release, I started working on the Everyone’s Crazy EP, which I think is a middle ground leading up to the LP; it’s way lighter and more accessible, and doesn’t require as much work on the listener’s party. But between that EP and the LP, I was making a lot of really noisy stuff. And I think that helped me to carve things out for the LP.

Stewart: I heard a lot of that stuff—it was pretty extreme, with a lot of raw emotion. It was almost punk, if I’m allowed to say that. [laughs] But I think you can also hear a lot of that emotion in the album, even though it’s much less visceral and noisy.
Sharma: I wanted to make the album more approachable and maybe a little less self-indulgent. I think the majority of my music is self-indulgent. I make it for myself first, but hopefully people enjoy it. I also knew, once I got the album locked down, that it had to be something a little different than the EP. I really wanted to challenge myself as producer; I wanted to make something that was as restrained as possible. And for me, it’s extremely restrained. I was trying to boil it down to the rare essence of what I wanted, yet to make it as accessible as possible.

Stewart: I can definitely hear that restraint. Sometime with the Sepalcure stuff, it almost feels like there’s too much going on. But anyway, I think you did a good job with the restraint.
Sharma: Thanks, homie!

Stewart: Do you feel that this album was cathartic or therapeutic? Did it help you work things through?
Sharma: With every track on there, it was like, if I didn’t write that track, I didn’t know what the fuck I was going to be doing. The process of creating it was more raw than I’ve ever experienced. It was not the happiest period, and there are some lines in there where I’d wake up the next day, look at what I had written and think, where did that come from?

Stewart: You used a lot of field recordings when you were making the album, right?
Sharma: Yeah. There were a lot of really personal recordings from the past that I used. And there were some funny ones, like days when we’d be hanging out on the back porch, and I would just set the phone down and record with no one noticing. A lot of the time, I wouldn’t use the voices, just the snippets between the voices. My neighbors had this waterfall thing, so a lot of the water sounds are just random moments from that.

Stewart: All albums are like time capsules, but it really feels like this one is about capturing moments and filing them all into tracks.
Sharma: In the end of the day, you want to make music that goes beyond just the time you are making it. But I’m always writing music that is emotionally relevant to me at that time. I think you can relate to that; you’re creative style is. “Let me get it all down right now, because this is the purest creative moment that I’ll have.” It’s a little different for me, though. I take months to write tracks, and those months are condensed into the album. That’s just for me and for anyone who knows me—but in the end of the day, it’s about the song. And hopefully anyone who hears them with think, hey, that’s a really unexpected sound, or that’s a really weird vocal.

Stewart: Mute Swan finds you recording your own vocal lines, but also working with other vocalists, which you haven’t really done in the past. What made you want to put the emphasis more on what you’re actually writing, rather than what other songwriters are writing?
Sharma: I wanted to get away from what has become sort of a trope in electronic music: the ghostly sampled vocal line. I mean, I love it to death and will continue to use it. But I wanted this to be more personal than that—not just hey, there’s a cool vocal that was manipulated. But I’m not a great vocalist; that’s not what I do. But I was realized that I knew a lot of great vocalists, and there’s so much to be said for working with someone in a studio. And these vocalists are a part of my life; there’s not a single person on this album that I’m not connected to. And they knew what was up in my life. It’s like, this is my world, not just something that’s constructed from bits and pieces that I pulled off the Internet. It’s a lot more than that.

Stewart: Are you interested in performing Mute Swan live at any point?
Sharma: It’s a tricky situation. I’m in a weird place where I’m playing the Braille house sets all the time, and I love doing that. But when it comes to an album performance, it’s more of an artistic expression—and it’s something that I’ve always wanted to. It might not be the most accessible experience, but I think I think I can make it something that’s both artistically fulfilling and enjoyable for an audience. The problem is having people come to your show expecting to hear the latest throwing down from your heart and soul. But that’s what’s going to have to happen. It’s a delicate balance between overindulgence and accessibility, but that’s something I’m going to have to tread.