After a whole week of back-and-forth between Martyn and Modeselektor, the final chapter of their […] 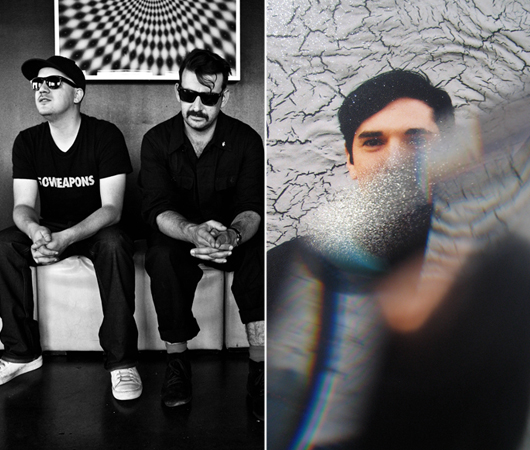 After a whole week of back-and-forth between Martyn and Modeselektor, the final chapter of their […]

After a whole week of back-and-forth between Martyn and Modeselektor, the final chapter of their in-depth conversation has finally arrived. In previous installments (part one | part two | part three | part four) Martyn and Modeselektor’s Gernot Bronsert and Sebastian “Charlie” Szary talked about touring, their new albums, record shopping, their labels, production techniques, and more. Today’s segment finds them shifting gears and getting a little more philosophical, focusing on the changing state of electronic music and clubbing.

Martyn: I’m curious. How has the crowd changed for you over the years? With playing live and stuff? I was doing another interview, and they asked me the same question and I thought it was kind of interesting because I’ve been DJing quite a while, and I know you guys have been playing, and playing live as well, for a long time. Can you tell me how your crowd, and the way you’re playing, has changed over the past few years?

Gernot Bronsert: That’s a good question. I’m going to describe a typical Modeselektor weekend for you. Let’s say we have three gigs—Thursday, Friday, Saturday. The Thursday can be in London with Richie Hawtin, the Friday can be in Paris with DJ Feadz, and the Saturday can be in Portugal with Skream and Benga. I think the people who book us come from all kinds of musical camps, so we can play one day on the dubstep party, we can play another day on the minimal techno or techno party, or whatever. So I think the crowds haven’t changed much to us. We’re more like a band, you know? This is different, so we have a different expectation. For example, when you have a booking as a DJ and you’re booked on a party where some Detroit guys are playing, would you change your set compared to a booking together with some UK funky DJs? Or would you play your own stuff always?

M: I would play my own stuff.

GB: Always, or just since you started playing live?

M: Always. I think what the [interviewer] meant as well was that when I started DJing, it was around 1997 or something. He said that the crowds were more there for the party and the music, to be in that club. And that nowadays a lot of people come to the party, not to be in the club, but to show on Facebook that they are there. That a lot of the crowds are more interested in Tweeting, taking pictures, making videos, all this sort of stuff that’s not really about clubbing. That was his point.

GB: What do you think?

M: I think that if I look at places like Panorama Bar, at Panorama Bar you can’t take pictures, and I think this is very important for the vibe of the club, because people can more easily be themselves when they know they’re not going to end up on the internet the next day. So I do think that it really helps. The people that go to Panorama Bar, they go because the music is there and because they want to be there and they want to dance or hang out with their friends or get drunk, it’s not so much about being there.

GB: I totally understand, but I don’t think too much about it. There are clubs where you are not allowed to take pictures. I think it’s not just because there are all the kids filming for Facebok, it’s also about that you have a lot of people there who have a normal life. They party hard, and when some weird pictures of them partying and doing some stupid things end up on the internet, they can destroy a life. I think it’s just a security thing. It doesn’t have much to do with the vibe, because no one cares if someone is taking a picture with a cell phone or whatever.

What I realized is, during the last tour we were playing with Modeselektor in 2008-2009, people filmed just the peak-time things and put them on YouTube. And all the kids who came to see us for the first time, they started stage diving, even before we started playing. They saw this on YouTube and that was their impression about our live sets. I think this is maybe one of the things that is pretty weird, but [these things] are not annoying me. It’s more funny. You are more related to the club culture than us, we are more in between being a band and being a club act.

I like it private too, I like private parties the most. I really like ending up in private parties with some DJs playing really good music. I don’t need to be in the club anymore just to be in the club, to be seen by others, talk to others, or talk to new people, meet new people. When I go to clubs to see the DJ, I want to dance or whatever. I can understand this [interviewer], but he sounds like one of these angry guys who doesn’t want someone to destroy his spirit of techno, or whatever. I always look forward and not backwards. I think it’s important that times are changing and that the kids are spreading electronic music or the scene or the vibe in their way, with their techniques. I like that, I appreciate that, I’m open to everything.

M: I guess you’re right. It’s just a sign of the times. You can resist as much as you want, but it’s not going to help anything anyways.

GB: You know, Charlie and I were both born in Berlin and were raised here and we grew up with techno and saw big changes, how the whole thing changed. A lot of our friends just gave up, just went out of the game and said, “No, that’s not my techno anymore that I grew up with. I’ll do my own thing now.” We were never like this. We always look forward. I think it’s important to develop things and use the new opportunities.

M: I think if you look forward, at least you don’t get cranky about situations. You don’t become elitist. Like, “Oh man, way back everything was better, and now it’s all gone to shit,” and so on. You don’t want to get frustrated by the scene and about music, you just want to look forward and keep a positive attitude. I think you guys as well have a positive attitude towards new developments. It makes it more interesting, and every time you will look for your answer to whatever the developments are. You will find your own way to do a live show or collaborate with other people or do a label or do something new, every time.

GB: We get asked so often why we would start a label now, in these bad, bad times, but we don’t feel bitter, we are not filled with bitterness about the changes and everything [else]. I think it’s important to push things forward and show the young audience to respect music. Music needs respect. All the electronic musicians, they pay for their music with their own blood, they just cut a piece out of their heart and press it on vinyl, or press it into an MP3. [laughs] I think it’s important to show people, especially the young people, the amount of music, the quality, the value of music.

M: What about people that have labels that are vinyl only?

GB: They’re geeks. [laughs] But I like this. I’m a vinyl geek too. I still buy records, even if I don’t DJ with vinyl anymore. We don’t DJ that much anyways, we are a live band, but I like the medium. The 12″. The black disc. It’s amazing.

M: It’s strange. I buy a lot of vinyl still—I never play it, because I use Serato for everything—but the thing about vinyl is that it’s nice when you buy a record and you have something to listen to and something to look at. Like how it was in the old days when you would buy one of the gatefold sleeves and it would have the lyrics in there and you could just sing.

GB: Have you noticed that all the labels are taking more and more care to make nice packaging? It’s just to make it more flavorful and collectible for the people. I really like to buy LPs. When you listen to them, you can sit down and look at the cover.

M: The other thing is that you have labels that are vinyl only, and those people that are against CDs or MP3s and they never want to have anything to do with digital, you also have them coming up to me and saying, “You have a vinyl label, why do you play Serato?”

M: Because it’s easy and I have a lot of music and I have my laptop so I can travel instead of breaking my back with record cases.

GB: And you want to be quick through the airport.

M: Yes, quick through security with my Mileage Plus card.

Sebastian “Charlie” Szary: That’s the same thing we did with our DJ set in the last year. We use Traktor, but not Traktor with the timecode vinyl, we use it with the S4. We use the MIDI out to plug in a 909 or another drum machine.

GB: I was DJing and Charlie was using drum machines, 909 and 303, just to have more fun, you know. That’s impossible to do with just vinyl. We are not Jeff Mills, you know. But we felt like Jeff Mills!

M: It’s just a bit silly. Even if I use a laptop, I just don’t understand why people think you have to use vinyl if you have a vinyl label. I think someone once told me that if you compare it to a grocery store, that if I had a product that I would want a lot of people to [buy], then I would just sell it at a grocery store, I wouldn’t sell it at the small, tiny little store next door. That’s the same with vinyl and using other mediums like MP3s. If you want people to listen to your music, then you just make sure to bring it to them, you make it available for them. I think, nowadays especially, there are people that just buy vinyl, but there are just as many people that just want the music on their iPod or something. They will not get the nice sleeve and they will not get the feeling of the black vinyl, but if they don’t care about that, if they just want to listen on their iPod and go to the gym, that’s okay too.

All five chapters of B2B: Martyn and Modeselektorcan be found here.