Robert Hood and John Tejada are veteran producers in the truest sense of the term, […] 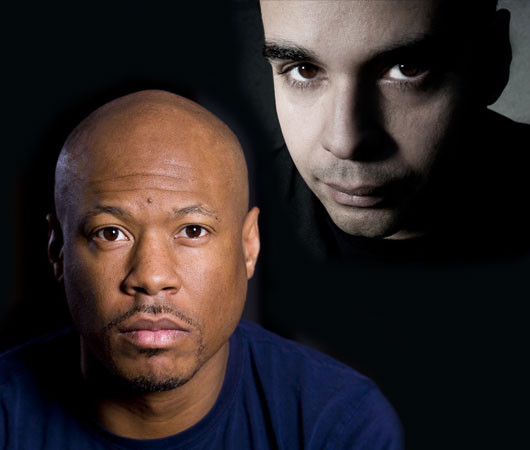 Robert Hood and John Tejada are veteran producers in the truest sense of the term, […]

Robert Hood and John Tejada are veteran producers in the truest sense of the term, having separately witnessed, survived, and—in some cases—led through the various ebbs and flows of techno’s last decade-and-a-half. Last month, both artists individually unveiled their latest statements, with Hood issuing the third installment of his Nighttime World series (the last of which appeared on his own M-Plant label over 12 years ago) and Tejada offering his second full-length release for the renowned Kompakt label, The Predicting Machine. While they may come from different schools and slightly different generations of techno lineage, Hood and Tejada found much in common when we brought them together for a special conversation, and in the first part of our B2B session, the two men revealed a glimpse of electronic music’s early spirit while discussing how they’ve continued to find inspiration for all these years.

XLR8R: Both of you have been producing and DJing for well over a decade now; is the inspiration to create still the same as it was when you first started?

Robert Hood: In the beginning, it was pretty much my love for techno, my love for house music, my love for music, period. Now, there’s still love for music—for just triggering a sound—but I’m driven more by the Holy Spirit. It’s a spiritual connection that drives me. Whereas before, I thought it was for my self fulfillment, it’s more of a God mission for me than anything else now. It’s a mission to reach out to people and this techno music is just a vehicle, a catalyst. It’s an area that allows me to reach people that maybe are not hearing the message, or attending church, or reading the Bible. So that’s my main objective now, to spread the gospel through electric wires.

XLR8R: When do you think that change in your focus occurred?

RH: Probably 2002, around the time the first DEMF jumped off. I realized that my own ego and what I was driven by had to be redirected, and I realized it wasn’t about me, it was about a higher purpose.

John Tejada: I think, like Robert, in the beginning, the way things influenced you was different. We didn’t have social media and all these sorts of instant things, and you would go to the record store to meet up with people or find out about new music from magazines. There weren’t all these websites and everything, so there was a different kind of pace and tempo to the way you’d get the information. I remember also being so influenced by the sounds—everything was so new, and I don’t know if we can ever experience that again. Those were definitely very special moments when you heard something literally for the first time. A friend of mine references a time when I was really young and gave him some music and told him, “You’ve got to check this out, this will change your life.” He thought, “Well, I’m sure it’s good, but it’s not going to change my life!” But now, telling the story, he says that the music I gave him did actually change his life. The music really had that strong of an impact for all of us that loved it. I’m impressed by what Robert just said [about his spirituality]—it’s really quite amazing—and while I might be on a different journey myself, I find the constant need to search. I’m always craving to hear that new thing, and I can’t help but create constantly and get this sort of energy out of me. It’s just something within my soul that has to happen whether I can help it or not.

XLR8R: What was it like to hear those inspiring sounds for the first time? Are there specific songs or artists that come to mind?

JT: For myself, I was in LA and I really got into all this through hip-hop culture. We had a great radio station called KDAY which had some interesting DJs, and a big part of that scene was more electronic/experimental sounds—which nowadays people have come to call electro or whatever. As time went on, you started hearing things in the mix like Model 500’s “No UFOs,” Art of Noise; stuff that wasn’t technically part of hip-hop but was still part of the same culture. I was always more drawn to the electronic/experimental side and as that part of the culture developed, I just followed those influences more.

RH: I had a similar experience with hip-hop. I can remember the first time I heard “It’s Like That” by Run DMC. That changed my life, changed my world, changed how I thought about music. I grew up with the idea that music had to have an intro, a verse, a chorus, a bridge—the typical structure of a song. But “It’s Like That” broke that down completely, and it was completely stripped down and minimized, and just so raw and in your face. For me, that was my first idea of “minimal.” Like John was saying, looking for that sound or that groove or that beat that will change the world, that will really shift planets, it’s a constant drive. Looking back to the days of “The Wizard” Jeff Mills, the days of the Electrifying Mojo, and this Detroit culture that I come from, coming up on Parliament Funkadelic, Bootsy Collins, The Specials, Falco, Phil Collins, Genesis, Derrick May’s original radio show (called Electric Crazy People)—all these sorts of sounds and rhythms—that’s what shaped me as an artist and a musician. I can remember being in high school, me and Anthony Shakir would trade records back and forth and talk about these strange, obscure records that we found or what we heard on the radio. Those days are just kind of lost and gone, and we’ve been programmed. Like John was saying, that constant need, that tiny voice in our soul, in our spirit, is what guides us to keep to going, to search for that particular feeling that’s going to satisfy ourselves, that harkens back to those days but also takes it forward into the future at the same time.

JT: I also had quite an epiphany with the first Run DMC album, and that song in particular. I was in fifth grade and I had that cassette and I would bring my radio to school and I wore that thing out, every single track. “Jam Master Jay”—I still don’t know what’s going on in that song. I was drawn to that record because of “Rock Box,” that was my intro. I moved to the States when I was eight, in ’82, and I immediately discovered Led Zeppelin and all these kinds of things, and when I heard “Rock Box,” that was it—I was into hip-hop and all the Arthur Baker productions and all the stuff I’d never heard before. That Run DMC tape, for a good half year, was never turned off. [laughs]

RH: ‘Til this day, I still get chills when I hear “Rock Box” because it’s just so hard, so in your face, so stark. And it’s pure. I can remember when I first laid eyes on Run DMC, I thought, “What kind of name is that for a band? Run DMC? What is that?” And then I skipped school one day to go down to see them play a free concert at Hart Plaza in Detroit, where they have DEMF now, and I went down there to see who Run DMC was and what this was all about. Jam Master Jay was behind the turntables, and there were these two guys on stage with these hats, Adidas suits, and no laces in their Adidas—I was just mesmerized. It was like punk rock. It was hip-hop before it was hip-hop. To me, it was everything that embodied music. It was incredible. I don’t know if there will ever be anything like that, because people are copying each other in a cookie-cutter pattern now.

JT: Right, it’s a bit paint by numbers—that’s the negative side of it. It does give everybody the opportunity to do it though. I definitely agree with Robert, that there were those first moments that will never happen again. And I was going to add also that Larry Smith did all this stuff you don’t hear about a lot. You’ll still hear about Rick Rubin and different people like that, but Smith did that Run DMC record and the Whodini albums, and they were totally different. For me, Whodini’s Escape was an equally complete shock, and to know now [that] the same guy did those is really impressive.

Part two of B2B: Robert Hood and John Tejada can be found here.