David Kennedy seems perfectly positioned for the new millennium. His recollection of the 20th century […] 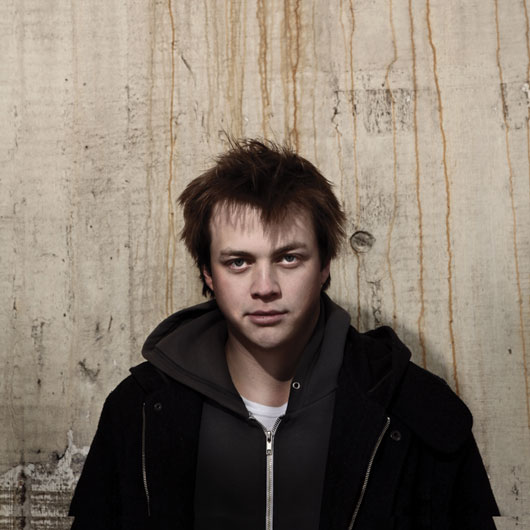 David Kennedy seems perfectly positioned for the new millennium. His recollection of the 20th century […]

David Kennedy seems perfectly positioned for the new millennium. His recollection of the 20th century is a bit vague. The future is far away and up for grabs. His professional creative trajectory, which began rather suddenly in the mid-’00s when he stumbled upon a low-pressure sound community growing in London, is all happening in the present.

“I just started hanging out at these parties and becoming exposed to a developing scene like nothing I’d ever experienced before,” he says. “I threw myself into it. My mates at school thought I went bonkers. The direction of my life, all my friends, completely shifted due to dubstep.”

It shifted so dramatically, in fact, that Kennedy began to disappear behind a moniker called Ramadanman—chosen for how it looks and rolls off the tongue rather than as any personal relationship to Islam—that he’d thought up when he was about 13. That was just after the ’90s became the aughts, when he was getting over listening to “pop rubbish” and turning on to something deeper and darker. “I liked how the name sounded then.” And we like how it sounds now. It’s one of the smartest and most distinctive aliases of any artist at work in the 21st century.

Ramadanman is on Skype, talking from London, telling me about this transfiguration from impressionable club kid to confident and versatile bass producer. The most significant changes seemed to come about when he was preparing to head north to study English and French at Leeds University.

“I wasn’t even of legal age when I began going to FWD>> in spring of 2006,” he says of the influential weekly that helped put dubstep on the map. “It was grime and garage that held my interest before that. But not like this, which was the new, exciting sound of right now. I became insanely passionate about it.”

Passion begets passion in any music scene. But the burst of raw energy generated by the forward thinkers and doers of the first wave of dubstep—in London and Bristol primarily, though a number of key players were found in some northern UK regional centers and peppered across the European continent—was a real fire starter.

Around the time Kennedy bounced into the party, DMZ (the label run by Coki, Loefah, and Mala) had been around for a couple of years, Steve Goodman (a.k.a. Kode9) was less than a year into Hyperdub, Burial had not yet been outed, Rob Ellis (a.k.a. Pinch) had launched Tectonic, and Skull Disco was becoming a double-barreled platform for the rapidly ascending Appleblim and Shackleton. Then there was Paul Rose (a.k.a. Scuba), who was building Hotflush Recordings into a crossover power center in London and later Berlin, while in The Netherlands, Martyn was undergoing a transformation from Dutch D&B promoter to brave-new-world dub producer in American suburbia.

At FWD >>, Kennedy, now 22, met the slightly older Ben Thomson and Kevin McAuley—a.k.a. Ben UFO and Pangaea, respectively—who were also students at Leeds. The trio began putting their passions together and started the Hessle Audio label in 2007. It provided a significant new gateway into dubstep for artists that were still keeping the bass crunch of the music intact, though gradually losing the wobble that had been a signature element of the style.

In its place, the Hessle kids brought to the table a distilled but intuitive reading of soul, funk, and jazz—largely via an apparent love of house and jungle that had been produced a full generation before. There were also traces of techno, especially the dub stylings of Berlin’s Basic Channel, and hybrid features that stacked up nicely against freaky Detroit Afrofuturists Moodymann, Theo Parrish, and Omar S.

Kennedy says, for him, the house influence came from frequent visits at age 14 to the Vinyl Junkies record shop in London’s Soho. “I listened to a few things, I bought a few things,” he says, but when he began to fool around with FruityLoops at 15, it was grime—not house—he tried to make. “But people started saying it sounded to them like dubstep, which I hadn’t really heard of before then,” Kennedy says. The more he got into his own music as a writer and producer, the more left of center his tracks became, effectively bending and shaping a genre he knew little about into something, well, not quite like anything else.

In 2006, he made some digital tracks that he offered up to DJs, and put out a side called “Response” on a split 10-inch (with Conquest) on the Bare Dubs label. It was also his first year at university. “I was going to school, making music, starting up a record label. It was quite a busy year,” he recalls. But it got even busier in 2007, when Thomson, McAuley, and Kennedy issued Hessle Audio 001, TRG’s “Put You Down” b/w “Broken Heart.” Both sides were killer, garage-like blues jams that got the attention of DJs and clubbers across the UK and the continent and made their way to discerning ears in North America. Pangaea’s three-track EP, Coiled, followed later the same year, and Untold’s “Kingdom” 12-inch and TRG’s originals, with remixes from Martyn and Ramadanman, were released early in 2008.

“Put You Down (Refix)” was the first transmission by Kennedy on Hessle Audio. He didn’t do much with it, frankly, except to strip it of most of its gloss and sheen. It was already a tight, lean track, rough around the edges and dancefloor-ready. Ramadanman just made it edgier, leaner, and, yes, grimier. But it was his next release that hit the bullseye full-on.

Hearing “Blimey” for the first time was like being shocked to attention by one of those illuminated skeletons that comes out of nowhere and quivers and shakes in the dark. It’s all drums and texture, with a subtle bassline that rises and falls, introducing a chorus of kids’ voices backed by a barely audible melancholy melody, all engineered for maximum dub impact.

It certainly made an impression on minimal techno star Ricardo Villalobos, who took to opening his typically trippy marathon sets with it. So what did Ramadanman think about that? “I was tremendously flattered, of course. But I have to admit I didn’t even know who Villalobos was at the time.”

In a digitized, instant-information century, where everyone can claim to know anyone via social networks, his comment seems entirely refreshing. So is this: his admission that he needs to catch up with the music of Carl Craig, who re-edited his 2010 collab with Appleblim, “Void 23,” on Aus. “He was given the track and did amazing work on it,” Kennedy says. “I never met him—except we Tweeted each other after the track was done… He said it was a nice track. I said, ‘Cool!’ That was about it.”

Humility, talent, and ambition seldom align as they appear to with Ramadanman. It’s probably a good reason why he’s part of a solid team at Hessle Audio, and why he has developed a strong working relationship with Appleblim. “He comes up from Bristol and we just spend hours and hours in the studio,” says Kennedy. “I’m more of a technical producer whereas [Appleblim] just throws something out there and sees what sticks.”

In 2009, the pair produced two memorable tracks: “Sous le Sable,” a 10-minute tech-house jam included on the Aus EP series and comp All Night Long, and the buoyant “Justify,” an infectious, shuffling power dub that defies easy categorization. There’s a little bit of everything in there—with Berlin and Detroit squeezing out the UK influences by a nose.

Ramadanman has also split production duties with Midland—his housemate—on the funky-house-inspired “Your Words Matter” b/w “More Than You Know,” which borrows from Chicago- and New York-style grooves without sounding like either.

His other credits packed into a career now entering its fifth year are equally impressive. Ramandanman shared a Dubstep Allstars mix CD (with Chef) on Tempa that Kennedy calls “a snapshot of where I was at the time [in 2008-09], playing the new stuff, vinyl, and dubplates, along with a few classics.”

But 2010 also saw Kennedy quicken the pulse on several Ramadanman productions: the six-track, self-titled EP on Hessle Audio hints at the shape of new directions to come, especially on “A Couple More Years” and “Don’t Change For Me,” which mines UK hardcore and jungle and adds more juice and swagger than on previous efforts; the “Glut” b/w “Tempest” sides for Untold’s Hemlock imprint, where he inserts cut-up vocal edits and fires up the 808-influenced drum programming even more; and the “Fall Short” b/w “Work Them” EP (Swamp 81), which recombines all his inspirations into an acid-funk-Chicago-juke-B-more-club-groove thang that sounds like no one else working at the moment.

While there is a reductive sonic architecture detectable across his body of work, none of the tracks really sound alike. There is subtle variation in all of them. That’s a neat trick that can only come from a rare, unique talent. Is it pure instinct or is the work part of a conscious process?

“I’m never content to do the same thing twice, so my music is always evolving, moving forward,” Kennedy says. “It’s hard to judge it chronologically from 2006 to this point, but it’s all been a conscious attempt to not clone any of my tunes, to always break through to something new. Otherwise, it’s just not interesting.”

The fact is, Ramadanman, Pearson Sound, and Hessle Audio’s product has been far more than interesting. It may be too early to call, but the guess here is that history will offer kind rewards for all of the above projects. From day one, Kennedy and crew have been competitive with the best of their bass music contemporaries, carving out a niche and owning a funky corner of the dubstep sub-world.

Ramadanman has beefed up his tour schedule and is in greater demand for DJ gigs (“I did support for Modeselektor [in late 2010] and it was my first time doing a kinda rock-star thing on a tour bus. Wicked!”) and started his own weekly, an all-vinyl night in Leeds called Acetate. He’s just finished a FabricLive mix to be released in March in Europe and April in the US.

So where does Ramadanman see his life and artistry heading over the next five years?

“I don’t think about it, really. I just plan on making music,” he says. “Just a few years ago I was going nuts in the club, probably just acting like some totally annoying kid. Now I run a record label, make sure all the tracks are mastered properly, listen to the test pressings, and put them out when they’re ready. It’s pretty boring stuff, really. It’s who I am. I can’t see myself in the future any other way.”

Ramadanman’s FabricLive mix will be released in April on Fabric.