At first glance, Balam Acab may seem like a standard, flash-in-the-pan bedroom producer. The artist […] 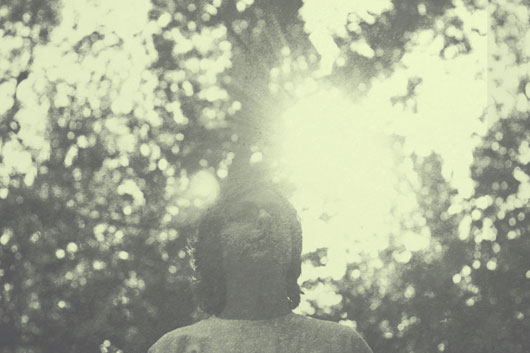 At first glance, Balam Acab may seem like a standard, flash-in-the-pan bedroom producer. The artist […]

At first glance, Balam Acab may seem like a standard, flash-in-the-pan bedroom producer. The artist named Alec Koone was signed to label of the moment (some might say label of the year) Tri Angle last year based merely on a few tracks posted to his Myspace; his supernatural beat music saturated just about all of the internet’s tastemaking websites instantaneously, thanks in part to his unwitting connections to the so-called “witch house” genre; and the hype surrounding Balam Acab threatened to burst after he received nods from actress Ellen Page in Entertainment Weekly and his music was used to soundtrack a L’Oréal commercial featuring Beyoncé. But a closer inspection of this young musician—not to mention a single spin of his gorgeous debut LP, Wander / Wonder—shows Koone isn’t a one trick pony. He’s no dilettante, destined to fizzle underneath the pressure of early fame and fandom. On the contrary, he’s a knowledgable and relatively seasoned artist, one who is full of contradictions.

Koone is 20 years old, and currently lives at home with his parents. He’s a kid, for lack of a better term, who says Animal Collective and Pavement are two of his biggest influences. He also says that he loves noise bands like Prurient and Grouper, and has never really listened to much R&B. When it comes to the music of Balam Acab, however, there is an apparent emotional depth and classical style that belies both his age and incongruous tastes. Wander / Wonder‘s first leak, “Oh, Why,” obviously owes a certain amount to Koone’s admiration for folk singer Vashti Bunyan, but if the slow groove and angelic vocal refrains of “Apart” aren’t at least somewhat inspired by Aaliyah, then where do they come from?

These kinds of questions bubble up while navigating the eight waterlogged tracks that make up Koone’s first full-length, but truly (and, sure, figuratively) remain only on the surface. When you get to the core of his musical output, you find that Balam Acab is an inspired and hard-working musician with a keen ear for innovative and memorable melodies, a knack for building vibrantly textured soundscapes, and the ability to craft experimental pop music that works on multiple levels. That could be enough background information to give Wander / Wonder the proper introduction it deserves, but maybe it’s better to let Koone explain it in his own words.

When you were in Ithaca, what were you going to school for?
Music education, like, training to become a music teacher in schools and what not.

So, you decided you wanted to stop with those classes altogether, or are you just putting it on hold?
Well, I definitely don’t want to do music education anymore. Eventually, I’ve got to learn how to really mix and master properly, in an educated fashion, which I guess I’d have to go to school for.

What was it about the music education program that didn’t work with you?
I just think that music at college in general wasn’t what I expected it to be. I really didn’t think about it too much before I went. I just thought, like, “Oh, I’ll go for music, because I really like music.” It was just all classical, and wasn’t very creative. It was very ‘drill & practice’, very strict. But that’s music education at most colleges. I just didn’t really know.

You’re not as much into the clinical aspect of music?
Well, I enjoy playing classical guitar, and music theory made pretty good sense to me. It’s definitely useful to have all those skills. I don’t know… It was really busy, too. It was something that you had to fully commit to, or it wasn’t going to work out. It wasn’t my thing.

And your music was kind of taking off, so you decided to go elsewhere?
Yeah, yeah.

How is it being back with your parents?
It’s not bad, really, though a lot of my friends from here are elsewhere. It’s not bad because I don’t pay rent, and I get free meals, as well. I pretty much just get to hangout in my room, and work on music. If I want to go hang out with people, I can.

It’s providing you the perfect setting to focus on your work.
Yeah, it’s great for that. This is where I made [Wander / Wonder]. I didn’t have anything to do but make my album. I did that, then kind of took a little break, and now I don’t have anything to do but get my live show ready. It’s a really nice place where I can get my feet off the ground. It’s very comfortable for me. It’s not really that awkward for me to live at home. I’m still pretty young.

You said you’ve been putting together your live show. How’s that coming along?
I’m super, super excited about it. I’ve played in bands before, and I’ve played live shows and stuff. But with [Balam Acab], once I started getting booking requests, I just didn’t know how I would do it. Basically, a week or two ago I finally confronted the fact that I wouldn’t be able to just go up on stage and stand behind a laptop. That’s just boring. So, I’ve been working with this really good friend that I grew up with. I’ve had her over, and we’ve ran through some of the songs together with her singing them. I think I actually like it better with her singing the vocals. Plus, now we have the potential to put in vocal harmonies. I’ve also had to go in and sort of rework the mixes on my tracks, so I remade two of the old ones in an updated style. I realized they kind of had the vibe of the music I’d been making between when I finished my album and now, which is kind of different. I’ve been kind of remixing my own songs. You’re still gonna know that they’re the same exact songs, they even have the same melodies in the samples, but at the same time, it’s going to be different. I feel like it’s more airy, and more suited for a live show. The album is super textural, which is good for headphones, but the live versions are going to be bigger and spacious.

Will there be discernible words? You can’t really tell what’s being sung in your songs.
I don’t know if people will actually pick up on the words.

When you’re making your original tracks, are the words in your samples a part of what you’re creating?
Well, I personally know them.

But are you worried about translating them from what they were into what you’re making them?
Yeah, yeah. Lots of the lyrics don’t make sense, and we’re going to at least try to make them make sense. It’s not intended to be lyrical, per se. With the album… I know all the lyrics because I have the raw audio, but when people guess at them it’s always funny because they’re so set on what’s been established in their minds.

That’s sort of a musical trend: The presence of a voice, but a voice that’s not necessarily saying anything.
I just like it for the melodic aspects.

So that’s what you look for when you’re trying to find vocal samples?
Yeah, but I think in the future, the direction I intend to go will be with the vocals and lyrics upfront and center more so than what it is now.

Speaking of direction, where does Wander / Wonder go musically and sonically that your See Birds EP didn’t?
Well, all the tracks on See Birds were produced in mono, so one thing with Wander / Wonder is that it’s in stereo, every sound has more of its own space. The production style of the EP is kind of lo-fi. I ran it through tape and vinyl simulators, and it was mastered in the same way, so it has a very specific atmosphere to it. With Wander / Wonder, it’s more like you can hear every sound much more clearly. I think it’s also more textural. The songs are more fully developed ideas.

How do you mean “fully developed”?
It’s less loop-y, I guess, and some songs have verses and choruses. Some songs go through like three different sets of 10 sounds throughout different sections of the song, and there wasn’t stuff like that on the EP.

See Birds was built from samples you found on the internet. Did you do that for the album too?
I found all the field recordings and textures on the internet from browsing field-recording sites, sound websites, and what not. All the music samples—like if it’s a string sample or a banjo sample—technically come from the internet, but it’s music that I’m downloading. It’s real music. Also, at the same time, I try to sample stuff that, first of all, if you had the audio file on your computer you wouldn’t recognize it from my song, and second of all, there’s probably a 95% chance you’re not going to have that audio file on your computer or ever come across it.

You’re searching for those kinds of files specifically, or are you randomly coming across these obscure files?
Well, both. I’m actively searching for sounds, and I’m also just coming across something that I’ll decide to use because no one will ever know what it is.

You’ve called Wander / Wonder a “whole musical piece,” likening it to a Bach cello suite. Did you write the record in that way, as one specific idea?
I feel like that statement didn’t really come across how I wanted it to, because it’s not at all like a Bach cello suite, to be quite honest. In a Bach cello suite, there’s a melodic idea, and each section of new music varies that melodic idea. In the album, there are reoccurring samples, like angels and xylophones…

There are a lot of water sounds.
Yeah, there are water sounds, but they’re all pretty much different. But in certain parts of songs, some of the melodies are the same, and they’re on top of vocal opera samples that are also in other songs. So, I think there are reoccurring melodic ideas, and definitely sample ideas, that come at the beginning, middle, and end of the album. It’s not really one specific idea. It’s more of a journey, I’d say.