Behind the Scenes at RBMA Madrid, Part 1

Last week, XLR8R was invited to Madrid for a few days to get a behind-the-scenes […] 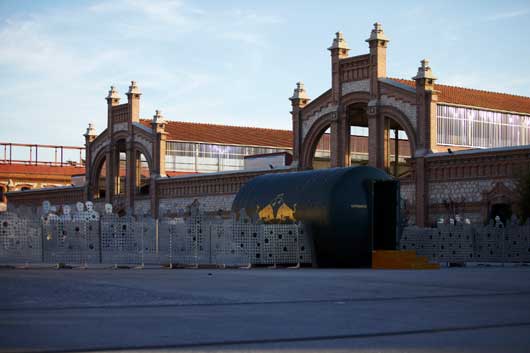 Behind the Scenes at RBMA Madrid, Part 1

Last week, XLR8R was invited to Madrid for a few days to get a behind-the-scenes […]

Last week, XLR8R was invited to Madrid for a few days to get a behind-the-scenes look at this year’s Red Bull Music Academy. The annual summit is currently in the midst of its second term, and upon his arrival, our editor Shawn Reynaldo was thrust right into the thick of things. Here are some of the highlights of what he saw.

Literally an hour or so after getting off the plane, I headed over to the RBMA complex, situated in the historic Matadero. Originally serving as the Spanish capital’s primary slaughterhouse, the expansive space eventually fell into disrepair, only to be revived in recent years as one of the city’s principal arts and cultural spaces.

As for the Academy, it’s tucked away in a corner of the giant Matadero complex. Constructed specifically for this year’s event, the RBMA space immediately seems like a cross between Jurassic Park and the various Dharma Initiative facilties from Lost. In past years, the entire RBMA space was encapsulated in a single building, but the Madrid Academy resembles a small village, as the lecture hall, recording studios, and various offices are each housed in separate little structures. The entire RBMA area is also adorned with artwork from a myriad of Madrid-based artists. Although this year’s Academy is obviously the primary focus of the space at present, it’s not going anywhere. Even after the official Academy comes to a close later this week, the recording studios and various structures will remain (for at least three years) and be available for use by the city and its art/music community.

The first activity of the day was a lecture with Barcelona-based producer John Talabot. Academy participants (of which there are 30 for each two-week term) are generally required to attend two lectures every day, each of which features a guest speaker who is an artist, DJ, or some other music-related person. Each guest speaks and answers questions—both from an interviewer and the participants themselves—for approximately 90 minutes. Lecturers this year have included Addison Groove, Erykah Badu, Tom Zé, Matías Aguayo, and several others. RBMA also makes a point to include some Spanish artists in the mix, including John Talabot, who spoke about his creative process, his history as a DJ, his love-hate relationship with remixing, and where his music is headed.

The second lecture of the day featured none other than RZA, the primary producer and de facto leader of the Wu-Tang Clan. Granted, XLR8R doesn’t go very heavy on hip-hop coverage these days, but the excitement in the room was undeniable. RZA proved himself to be a thoroughly engaging figure, colorfully recounting his own musical history and that of Wu-Tang. Over the course of 90-plus minutes, he also talked about production techniques, studio gear, sampling, and his film work, including his time learning the craft from Quentin Tarantino and more recent turn as director for the yet-to-be released Man with the Iron Fists.

After the RZA lecture, the RBMA crew quickly dashed over to the Museo Reina Sofia for Sliver to the Sky, a special live performance showcase in one of the museum’s theaters. Opening the show was LA producer (and current RBMA participant) Anenon. The Non Projects label head showed off his musical chops, constructing largely beatless compositions that nonetheless proved vibrant. Toward the end of the set, he also picked up his sax, which he played live, recorded, and then manipulated samples of on the fly. It was definitely an impressive performance.

Less engaging was the headlining audio-visual set by synth pioneer Morton Subotnick, who was accompanied by Berlin-based visual artist Lillevan. While it was interesting to hear a literal legend at work, the music wasn’t particularly compelling, a fact not helped by the lackluster visuals. To the artists’ credit, they kept their set to a reasonable 30-40 minutes, wrapping things up before serious yawns and in-seat awkwardness could take over the crowd.

The final event of the evening took place at the sprawling Macumba club, where at least two thousand people had come out for an evening to be headlined by a live set from Modeselektor. Before the party-starting German duo took to the stage, the dancefloor was greeted by an extended warm-up set from RBMA participant and Cubic Zirconia member Nick Hook. Keeping things pretty light and upbeat, he slyly mixed in some choice pieces of club-friendly bass music and house while also dropping a whole lot of crowd-pleasing hip-hop tunes, even prompting the audience to sing along by selectively dropping out the fader.

Sometime after 3 a.m., Modeselektor finally took the stage. Although a few people eventually left grumbling that the duo didn’t play “Hyper Hyper,” the pair undeniably rocked it while dropping a lot of tunes from their new album, Monkeytown. After years of playing live, the Berlin outfit has clearly learned how to work an audience, offering a cool visual and light array while consistently shifting tempos and keeping things unapologetically upbeat. Especially during the more techno-ish numbers, the club took on a serious rave vibe, which held strong throughout Modeselektor’s nearly two-hour set.

The final DJ of the evening was another RBMA participant, Welshman Doc Daneeka, who actually calls Berlin home these days and is set to release a new collaborative album with Benjamin Damage on Modeselektor’s 50 Weapons imprint. That said, following Modeselektor in the club is no easy task, but Daneeka did an excellent job, appropriately taking down the energy level and slowly building it back up with a quality mix of UK funky, ’90s house, clubby techno, and bass music. When the lights finally came on around 7 a.m., Daneeka still had a solid floor going.

Given the first day’s whirlwind of activity, Saturday’s light schedule was a welcome relief, although the evening would ultimately take an unexpected turn. Upon arriving in the late afternoon at the Matadero, a member of the RBMA team asked me, “Do you want to open up for RZA tonight?” After making sure that the request was serious, I said something along the lines of “Um… sure,” and began freaking out about what exactly I would play, especially because hip-hop is not exactly my forte behind the decks.

A couple of hours later, I found myself behind a makeshift DJ booth inside the Cineteca (movie theater) at the Matadero. While the rows of theater seats gradually filled up for the sold-out show, I played a mix of instrumental grime, hip-hop, R&B, garage, and half-time bass music that seemed to go over alright, even with a Wu-Tang crowd in the building. In all honesty, I barely looked at the crowd throughout my set, but when it was over, I noticed that the place was packed and also received a hearty round of applause. Frankly, it was a relief to simply know that I didn’t embarrass myself.

Next up was the star of the evening, RZA. The concept of the performance was cool. Essentially, he played a mix that included some of his favorite funk and soul cuts, some unreleased Wu-Tang material, a myriad of tunes he’d sampled over the years in his production, and a few random selections. The entire thing was accompanied by live visuals from Spanish artist Alba G. Corral. Unfortunately, the execution was less than stellar, starting with the visuals, which seemed almost entirely unrelated to RZA and his music while also most resembling a cross between MS Paint and vintage screensavers. For his part, RZA did grab the mic and throw in a few interesting factoids, but he didn’t actually do much mixing, instead playing small segments of each track, doing a quick scratch, and then dropping in the next tune cold. And although many of his selections, particularly the old funk and soul cuts, were quite good, others were not, especially the tracks by O.D.B.’s son—who apparently is an awful rapper—and his self-described “new shit,” which essentially consisted of two-year-old hip-hop and R&B songs. Also unfortunate was the portion of the performance where he played live on an OP-1 synthesizer and crafted some subpar electronic tracks which sounded like a cross between poorly produced gabber and ’90s-era Warp Records. Overall, it was a disappointing set, but it’s worth mentioning that RZA is not a DJ and was likely just trying to have some fun up there. Anyways, after his thoroughly entertaining turn as an RBMA lecturer, it’s more or less impossible to be too upset with the guy.