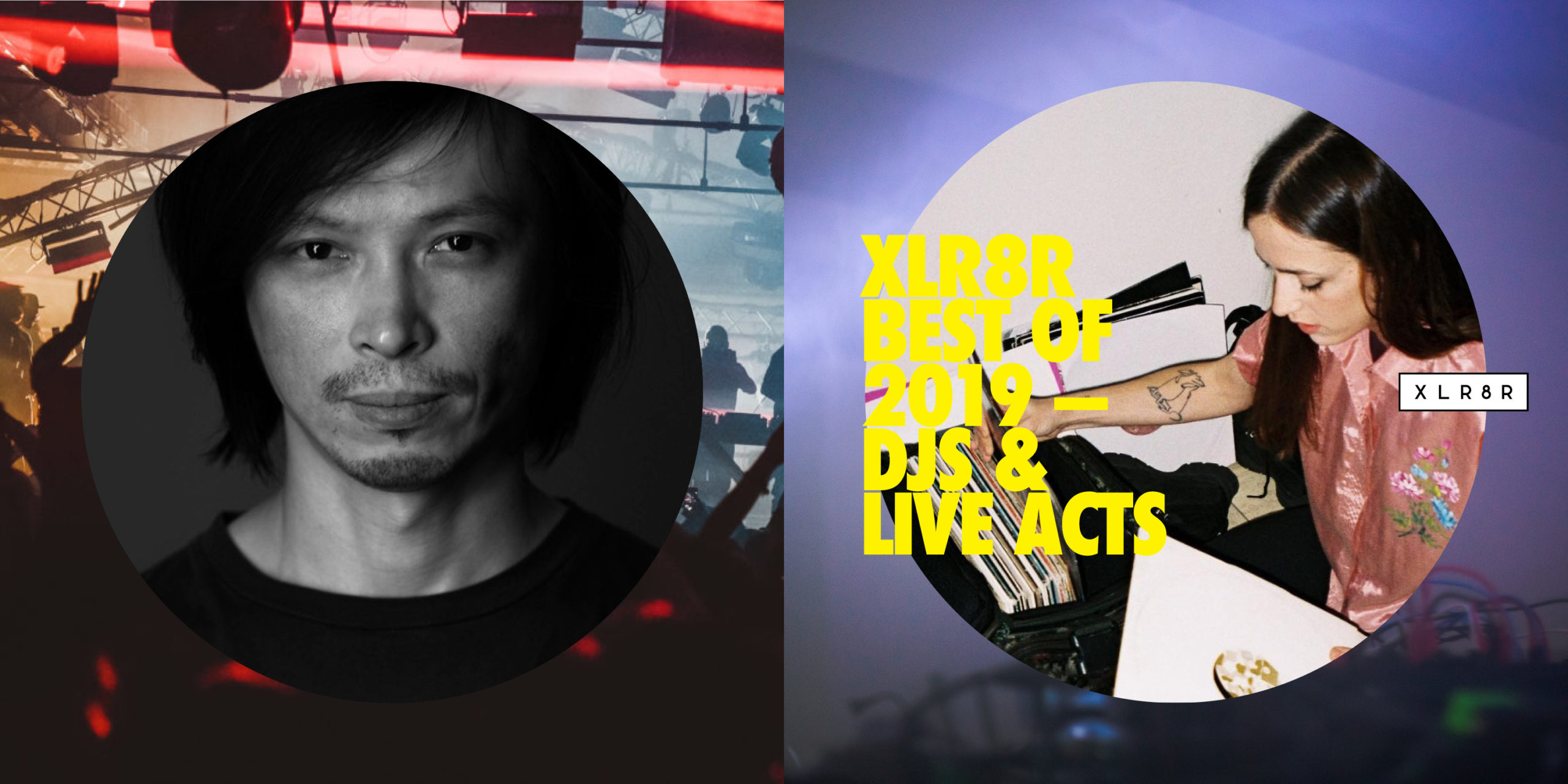 This is not a traditional best of list, we’d like to make this absolutely clear. What we mean to say is that by publishing this feature, we are not attempting to comprehensively rank the world’s DJs and live performers. However, we have given a list of the records that have stuck with us through a particularly turbulent 2019, and, in doing so, we’ve exposed some great music that would otherwise have been missed, and we’d also like to talk about the live performers that have impressed us, the XLR8R staff and contributors, over the past 12 months. It’s unrealistic to attend all the world’s musical events, but from the one’s we have, these are the DJs, live sets, and moments that have impressed us, in no particular order.

Perlon favorite Fumiya Tanaka featured in our Best of 2019: Releases list with Right Moment, an LP full of minimal grooves of the highest order, and this unwavering dedication to quality not only emanates out of his studio but his entire artistic output. His DJ sets are as technically immaculate as his productions, however, it’s behind the turntables that Tanaka really shows how deep and wide he can go within his chosen framework—a framework focused on pure groove. XLR8R hosted Tanaka for a showcase event in Los Angeles back in February and he laid down four hours of beautifully paced tracks, flowing through cuts from the stable of producers on home label Perlon as well as old-school house classics from MD X-Press (“God Made Me Phunky”) and the late Kenny Hawkes  (“Play The Game”). Fast forward to October’s Get Perlonized at Panorama Bar and the Japanese veteran continued his run of world-class form with an equally transfixing set, including tracks from Mathew Jonson (“Return of the Zombie Bikers”), 100 Hz (“Whisper”), and more than a record bag’s worth of unidentified bombs. Tanaka’s sets this year found a perfect balance between eclectic selections and precision mixing.

Caterina Barbieri delivered a new album via Editions Mego, and with it came a new live set, performed at Re-Textured in London, Dekmantel in Amsterdam, and MUTEK MX, hosted in Mexico City in November. Like the album, the set explores the psycho-physical effects of repetition and pattern-based operations in music by investigating the polyphonic and polyrhythmic potential of sequencers to draw severe, complex geometries in time and space—and her set in Mexico is something that sticks with us.

Barbieri began at around 1 am on the Friday night of the festival, and while those on the other stages were beginning to raise the intensity, she stripped things back, favoring hypnotic modular patterns and beautiful arpeggios over kick drums and bass. The Italian positions herself in a dance music scene but avoids the formulas, in the same way as artists like Barker, who incites an emotion in the listener without the kick drum. Her focus is on the deeper, emotional side of dance music, and by exploring these musical regions and emotions as well and as authentically as anyone, Barbieri forges a genuine connection with the listeners; something real. What’s important is that you can tell that Barbieri feels this, too: it’s not an act looking to capitalize on a gap in the market, and when an artist is honest in their musical expression then everyone can feel it and connect with it. Her show in Mexico was very touching.

Sugar Free (a.k.a Alejandra Valmorisco) really burst onto the scene in 2019. Born and raised in Madrid, Valmorisco moved to Berlin in 2016, quit her job, and committed her life to music. She’s now established herself as a regular at Hoppetosse and Club der Visionaere, and also recently made her debut at Frankfurt’s Robert Johnson, capping off a year that’s seen her play all over the world. On two occasions she impressed us in London, firstly for Gene on Earth’s Limousine Dream night at Pickle Factory, an ideal spot for her to play with its intimate setting and well-crafted system. She opened proceedings and set the place alight with her timeless groovy gems, spanning house and garage. Following this, we invited her to play our XLR8R party at FOLD where she played before Quest and Onur Özer, again on warm-up duties, and delivering once again. A rising digger with an eclectic and broad range, Valmorisco can make you move like few others. Certainly one to watch.

Iranian-born, Canadian-raised artist AIDA had a breakout year in 2019. In just a year, she went from relative obscurity to being one of dance music’s most exciting rising DJs via mixes for The Lot Radio and Redlight Radio, and a standout performance at Canada’s Bass Coast Festival, which Resident Advisor selected as one of five key performances—the mix of the latter has been on repeat in the XLR8R offices since its release. Up until last year, AIDA was mostly operating in the minimal scene, supporting artists such as Herodot, Shaun Reeves, Vinyl Speed Adjust, and Faster, but in 2019 came a noticeable shift, one that found her combining influences from her Iranian roots with a wide-reaching palette of house, techno, breaks, and electro. This shift in direction was brilliantly displayed on AIDA’s XLR8R podcast, released just last week, which presented a beguiling mix of world-music, synth-pop, and all manner of deep club styles.

One of the first times we witnessed DeWalta’s musical talents was when he played a live set with his partner Mike Shannon at Mutek in Montreal back in 2015, playing saxophone—he’s an accomplished jazz musician—and joined by Cobblestone Jazz’ Danuel Tate. Then, a year later, we caught him DJing at Berlin hotspot Heidegluehen, where he introduced us to his bouncy, groove-infused style of house, techno, and breaks, which then led us to book him for several of our parties in Los Angeles.

On every occasion, DeWalta has performed exceptionally well, but it was at this year’s XLR8R x Dialogue event that he really left an indelible mark. Across several hours, DeWalta, real name David Koch, flawlessly wove together genres old and new, breathing new life into timeless cuts such as Henrik Schwarz’s remix of “Yes Maam” (All Night Long) and Cobblestone Jazz’s “W,” while also dropping many unreleased bombs from his Berlin studio. His musical intuition of what to play and when to play a track is really up there with the best of them, and his sets are just getting better and better.

Earlier this year, DeWalta contributed a track (and a corresponding dub version) to XLR8R+ alongside Öona Dahl and Alci. Learn more about it here.

One of the rising talents of the already overcrowded pool of Dutch DJs, Identified Patient enjoyed success after success through 2019. He continued to wow crowds during poignant daytime sets at Dekmantel and Dekmantel Selectors, but nothing was better than his slamming performance in De School’s dungeon-esque basement at Amsterdam Dance Event in October. While Identified Patient usually opts to gradually increase BPM throughout his sets, making his way from funky, acid-tinged slow rollers to harder and faster cuts, at the Het Weekend celebration he instead pushed tired Sunday ravers to their very edge via fast-moving, pulsing, and bubbly energetic cuts.

Club Toilet again solidified itself as one of the highlight parties during a Movement weekend that is as known for the quality of the after-parties as the festival itself. The party—which represents the best of American underground queer culture by bringing several vital communities together from across the country— featured top-notch DJs from the likes of Avalon Emerson, Massimiliano Pagliara, Lakuti, and more, but none stood out more than the quickly rising CCL. The Seattle-born, London-based DJ weaved through twisted electro, ravey breakbeat cuts, and energetic trance anthems with ease. Expect to see CCL on a lot more lineups this coming year.

Sebastian Mullaert’s Circle of Live project kicked things into overdrive this year. Mullaert launched Circle of Live last year to explore the untapped beauty in collaboration and live improvisation in electronic music. The Circle now comprises over 19 artists, all identified and selected by Mullaert, who perform in different constellations at each event.

This year, Mullaert and his team launched Circle of Live: In Dreams, a series of sleeping concerts at which a selection of artists perform live improvised ambient music all-night-long, as well as curating an edition of XLR8R+, a package which featured an exclusive live recording cut from the Circle’s Movement Festival performance in Detroit featuring Mullaert, Mathew Jonson, Amp Fiddler, and Vril, and four tracks and content from the aforementioned artists. This was in addition to an artist retreat in Sweden, and the Circle’s Concert series and regular performances—if you can call the best live acts in electronic music jamming together for hours “regular”—at which Mullaert hosted Âme, Matt Karmil, Dorisburg, Johanna Knutsson, Laurence Guy, and many others. When it comes to live electronic music, few do it better and with such unwavering dedication as Sebastian Mullaert and his band of cohorts.

On October 19 and 20, Secular Sabbath, a sonic sleepover, took place in Los Angeles. This particular edition was hosted in a Mystic Dharma Buddhist Temple and featured meticulously curated ambient and experimental music, plant-based food and drink, and other surprises that included Reiki readings, tea ceremonies, and facials for those who chose to fully indulge. The standout performance came from Alfred Darlington, better known as Daedelus, whose musical roots traverse jazz, rock, and ska bands, and labels such as Warp and Ninja Tune. Across two hours, Darlington delivered a musical adventure that we will remember for many years to come, positioning itself in the realm of moody experimental and super trippy ambient. With this performance, Darlington exposed a deeper side of his sonic universe and contributed to a very special evening enjoyed by all those in attendance.