To his peers in the LA beat scene, Matthew “Matthewdavid” McQueen is an innovator— a […] 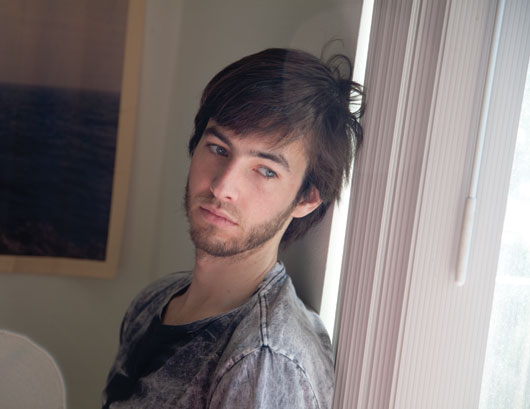 To his peers in the LA beat scene, Matthew “Matthewdavid” McQueen is an innovator— a […]

To his peers in the LA beat scene, Matthew “Matthewdavid” McQueen is an innovator— a man whose crackling, dreamlike compositions, full of tape hiss and half-heard ambient tones, inspired some of the most mind-blowing moments on Flying Lotus’ game-changing Los Angeles.
��
But he’s also a guy who loves Bell Biv DeVoe.

Today, I’m with him in the living room of the cozy two-bedroom house he shares with his girlfriend, artist Jesselisa Moretti. “This is tools of the trade, right here,” he says, breaking out a box of old cassingles in cardboard sleeves. “Whenever I play out as a DJ, I like playing all these old tapes that I’m digitizing from the late ’80s, early ’90s. Girls love it. It’s just really fun.”

Moretti, who designs all the packaging for the couple’s D.I.Y. label, Leaving Records, recalls a recent night he DJed at Low End Theory. “You played one of those sets, and I swear to God, girls just materialized, like out of nowhere.”

“I have a lot of fun with my mixes,” McQueen agrees with a shy, almost sheepish grin. “I spend too much time on my mixes.”

On one such mix, a recent XLR8R podcast, those old R&B cassingles figured prominently. Sprinkled amidst the 26-year-old producer’s trademark lo-fi electronics and bong-hit beats are snippets of everything from Michael Jackson’s “Man in the Mirror” to Cameo’s “Honey”—not played at full speed to please the ladies, but slowed down, filtered, and distorted, like ancient radio transmissions coming through on a broken boom box. The effect is at once creepy and nostalgic—two qualities that tend to fight it out in Matthewdavid’s original compositions, too.

Cassettes also play a role on those original tracks—not old Jodeci and TLC cassingles, typically, but the field recordings McQueen makes with his trusty Sony TCM cassette recorder, a cousin of the now-discontinued Walkman series. “It’s like my secret weapon,” he says. “The motor noise can be really loud when you’re using the internal mic, so I hook up an external mic to it.” The TCM, along with a handful of other tape recorders he’s picked up over the years, travels with him everywhere, from Big Sur to Joshua Tree—although he’s made some of his favorite field recordings right in his front yard, which occupies a terraced hillside high above the winding streets of Los Angeles’ Mount Washington neighborhood. In his home studio, overlooking that yard, McQueen has just put the finishing touches on his first album for Flying Lotus’s Brainfeeder label, due the first quarter of this year. He’s just decided on its title, Outmind, a made-up word he feels is universal. “Since being in Los Angeles, I’ve grown so much,” he marvels. “Artistically, I’ve just reached out into another form where I’m trying to understand myself and my existence. And that’s all because of being in LA and meeting Lotus, and being involved with dublab,” the experimental radio collective through which McQueen met Flying Lotus’ Steve Ellison and some of the artists he’s released on Leaving Records.

McQueen moved to LA in 2006; he’d never set foot there before, but immediately it felt like home. “I just knew what was happening out here. All my favorite labels, all my favorite music was happening out here: Stones Throw, Mush, Plug Research, Anticon, the whole underground hip-hop thing.” As a young rapper/producer growing up in the Florida Panhandle, McQueen naturally gravitated towards the West Coast’s experimental artists and labels, although his influences also range as far afield as Rawkus Records, Slum Village, Ninja Tune, chopped-and-screwed southern rap, and even leftfield sound collage artists like The Books, who inspired some of his earliest forays into tape manipulation and field recordings.

“My first record—this digital record I did for Plug Research—there’s a lot of Books influence on there,” he notes. “And it was stuff I was finding in weird Southern Baptist thrift stores in Florida—just strange home recordings that I was finding and putting in my music.”

These days, even when he’s working at home on 303s and Ableton Live, he’s just as likely to prop his Sony TCM recorder up against his favorite amp, record his own playback, then rip that back onto his laptop. The amp “has a really nice, warm sound” he can’t get from purely digital sources. “I think it grounds me,” he says of his continued reliance on analog recording techniques. “The whole thesis here is a tasteful distance or separation from technology.”

Not that he’s a technophobe—far from it. Giving a brief tour of the bedroom that doubles as his home studio, he proudly points out his growing collection of unusual acoustic instruments, including an Autoharp and a “banjo-mandolin thing” in need of new strings. But his most prized possession, though decidedly retro, is a gearhead’s dream. “This thing… we go back,” he says, sliding a bulky, purple E-mu MP-7 Command Station out of its black padded case. “In college, freshman year, my dad got me this. I saw this ad in The Source magazine with the RZA on a subway holding it like, ‘This is the one.'” [He imitates the Wu-Tang leader’s pose from that long-lost ad, cocking the Command Station under one arm and pointing b-boy-like at its dense grid of knobs and buttons.] “It’s a synth-sequencer. This was my first outboard piece of gear. It’s got some really cool, cool, cool sounds on it—arpeggio and stuff. I still use it.”

So the hip-hop influences are still very much a part of Matthewdavid’s music. But they’re just one crayon in the box. “I never want to nail myself down to a particular genre or influence,” he says, pointing out that his Brainfeeder debut also includes traces of folk, Low End Theory bass music, and the early ’90s pop and R&B of his beloved cassingles collection. There are even vocals—and not just sampled, distorted, buried-in-the-mix vocals (although there are plenty of those, too). “There’s one [vocal] that I’m the most nervous about that’s really in the foreground, for the first time ever,” he says. “There’s a lot [of] choral harmony things that I do, harmonizing over myself… I’m understanding pop structure, composition, pop arrangements now.” No one would mistake the woozy new tracks for Bell Biv DeVoe, but he’s not lying when he describes the Brainfeeder material as “more accessible” than his previous efforts.

Still, the moments nearest and dearest to him are those magical ones caught on tape. On the new album, one in particular stands out, recorded on a beach in Big Sur with Moretti. “I had a cymbal and my little tape recorder, and we’re chanting in this weird, funny, tribal, wave-crashing beach chant. It came out really cool.”

“That’s why I make a lot of ambient music,” Matthewdavid says, sipping tea on his couch while a rare Los Angeles rainfall patters softly on the roof. “That’s my folk music. It’s my easiest form of expression.”

Outmind is out soon on Brainfeeder