Booze, Boobs, Bricks, and More In Our NSFW Wrap-Up of the 11th Annual Gathering of the Juggalos

“We need TOTAL coverage!” I kept repeating that line from Fear and Loathing in Las […] 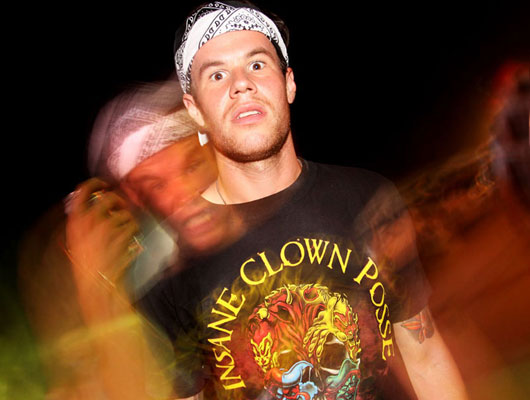 Booze, Boobs, Bricks, and More In Our NSFW Wrap-Up of the 11th Annual Gathering of the Juggalos

“We need TOTAL coverage!” I kept repeating that line from Fear and Loathing in Las […]

I kept repeating that line from Fear and Loathing in Las Vegas, and my photographer, Kelly O, was clearly getting sick of it. It was 5:30 a.m. at the final day of last week’s Gathering of the Juggalos, and we’d already been privy to a stabbing, a bricking, some country-bumpkin cocaine, and a guy named “Kiltman,” who forgot where his penis was. We’d wandered too deep, drank too many shitty beers, and though we were on assignment, there was a growing suspicion that the Big Laugh behind this trip was actually on us. It was time to leave this place—back to the relative security of the Bible Belt.

The trip started innocently enough on Friday morning. We drove from Nashville to the very southern tip of Illinois, right across the Ohio River from Kentucky, to a small town called Cave-in-Rock. The Gathering of the Juggalos was about 10 minutes from there, down some graveled-out, winding roads that were barely marked. By the time we got close, it was already pitch-black outside—the only light I saw came from an ambulance and a few cop cars that were parked about four miles from the grounds. I didn’t think much of it at the time, but those cops were the last law enforcement I would see for the rest of the weekend.

As we entered through the main gate, people were shuffling around like zombies; the heat was oppressive and the bugs were even worse. But the Juggalo family mentality was in full effect—everyone was greeting each other with a “whoop whoop” that was so automatic, it was both reassuring and creepy.

Comedian Tom Green was doing his stand-up routine to an enthralled audience sitting on bales of hay, so we decided to find some beer. A couple of nearby Juggalos had a 24-pack of Coors Lite, so we began talking with them about beer and heat and eventually, the real meat and potatoes: a stabbing that occurred about an hour before we arrived. Could have been B.S., but it turned out a 49-year-old man named Mark Rice was later arrested for the crime. “Y’all better be careful out there. Whoop whoop,” was the last thing the guy told us before we headed towards the second stage, where Tila Tequila and Lil Kim were about to play.

The ghetto was mad hot

Walking through the festival grounds reminded me of techno camp-outs from 10-plus years ago in Wisconsin, or really, ’90s raves in general. People wearing hardly any clothes, doing an excessive amount of drugs, and just blowing off some steam for few days. So it wasn’t that alien to be there, and in a lot of ways, it was pretty cool. Almost non-existent security, no cops, no rules, and yet the Juggalos were kinda, sorta coexisting. Aside from the stabbing and brick throwing, at least.

Speaking of bricks, there’s been a lot of noise over the Tila Tequila incident, but I found a couple things more disturbing than the brick toss. One was that a few Juggalos I was talking with (pictured above) were absolutely enraged at how “unbelievably fake” Tila Tequila’s boobs were. They couldn’t stop talking about it—how unrealistic the shape was and how they “wouldn’t even” engage in sexual relations with her because of them. Secondly, I spotted several men running into the port-a-johns to grab feces from the reservoirs so they could throw the waste on stage. That was weird.

Someone called Tila Tequila a “dirty cunt,” and this young man threatened to hit him with his nitrous tank

After the Tequila brick toss, Sugar Slam, the blonde, pig-tailed woman from the Gathering infomercial came out and told everyone the second stage “Ladies Night” was done. So we began a long wander back to the car, only to get sidetracked by Vanilla Ice at the “Freakshow” tent. He was self-consciously playing “Ninja Rap” when we came up, saying self-deprecating stuff like “who still remembers this SHIT? Whatever, I fuckin’ love this song!” while holding up a Teenage Mutant Ninja Turtles doll. Later, a series of women got on stage and took most of their clothes off during “Ice Ice Baby.” We stayed there until 6 a.m., and felt pretty positive about the experience.

These two were in the crowd during Vanilla Ice. I envied their bond.

There were all sorts of bizarre things you could do during the day at the Gathering: oil wrestling, helicopter rides, attend seminars on making it in the music industry, etc. But the one thing we missed that I regret was the Ms. Juggalette contest. I say this with total and complete sincerity, because I have no idea how they’d base their judgments. So many hardcore Juggalos that we met had a very old-fashioned take on what women should and shouldn’t show—I wouldn’t say it was puritanical, but (for example) showing boobs without warrant was not held in high regard. These women were actually referred to as “garbage dumps,” and there were many of them at the Gathering.

Saturday night into Sunday morning was met with a collective exhaustion, especially noticeable after Twiztid’s set on the main stage at 11 p.m. The heat was still atrocious, and a lot of Juggalos had been camping since Thursday, probably without any sleep. It seemed a perfect time to take a visit to the “drug bridge.” Nothing more than a short, over-lit bridge that connected one side of the campgrounds to the main stage area, where hundreds of people were buying and selling muscle relaxants, cocaine, marijuana, acid, lean, and much, much more. I’ve never seen so many drugs bought, sold, and traded so freely.

This man requested we blur out his face

We ran into this man at one of the Juggalo beer tents. Unfortunately, I didn’t get his name, but I thought he was one of the more intelligent guys we encountered over the weekend. Bear in mind that he’s talking on a megaphone in front of a bunch of other Juggalos, so there’s a bit of a peanut-gallery effect going on here.

I was pretty excited to see Slick Rick, Tone Loc, and Rob Base at the “Bomb-House” tent late on Saturday night. Sponsored by Shaggy 2 Dope from Insane Clown Posse, the tent was a little sparse on attendance, but the sound was good and the people there were totally into it. Slick Rick was a no-show, but Rob Base and Tone Loc were there, and they played what I thought was the best set of the festival. That being said, I’m not much of a Boondox fan, so take my opinion with a grain of salt.

At around four or five in the morning, Coolio got on the second stage and played the hits. We actually caught up with him earlier in the night at the same beer tent that we found the Juggalo Philosopher, and he was absolutely wasted. I could see the grey in his beard. But that didn’t change the fact that “Gangster’s Paradise” gripped this crowd with a startling jolt of ghetto reality. We decided to head home.

We came across this man while searching for our car, and he asked us if we needed any water, which I thought was really cool. We bullshitted for a while, and Kelly asked if she could get his picture. He was a very proper and polite guy, and he definitely had the best goddamn car on the lot.

We finally found our car at the end of a long row of tents, trash, and a security guard that tried to relate to us via “whoop whoop.” Inside the steaming rental, there was some water and a small cache of Twizzlers left, which I immediately ate. We briefly pondered the meaning of it all. It was too hot to think, but there was one central idea that stood out of this experience for me.

In an era where everyone likes everything, subculture has turned into a gigantic, indefinable wash. Punkers, rappers, ravers, witch-housers—they’re all listening to each other’s shit. Meanwhile, the clothes, the signifiers, the slang—it’s all been cross-co-opted to the point that none of it means anything. So what’s left? How do you rebel the old-fashioned way? Maybe if you’re from Kuttawa, Kentucky, it’s wearing evil clown masks and wagging around unmarked bags of pills. Maybe relishing in the ugliness is the only choice you’ve got.