Born Again: After Years Toiling in Relative Obscurity, US Garage Producer Todd Edwards Gets His Come-Uppance 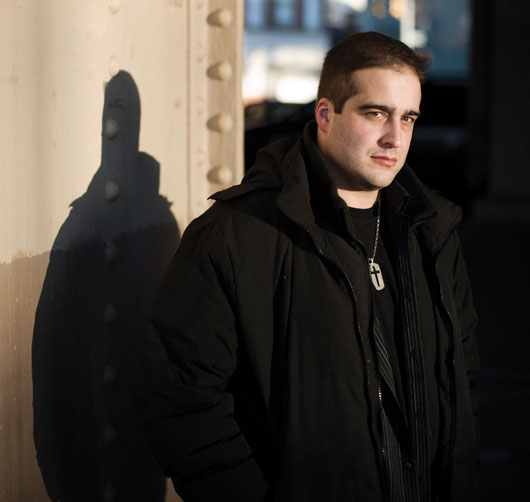 Born Again: After Years Toiling in Relative Obscurity, US Garage Producer Todd Edwards Gets His Come-Uppance

When New Jersey’s Todd Edwards headlined London’s club Fabric recently, it felt like a homecoming. Not because it’s particularly rare for Edwards to play London, but because in recent years this Italian-American garage producer has seen his status rise from critical cult favorite to that of an established and accepted touchstone for the UK’s frequently shifting underground dance scene. It wasn’t lost on the crowd, nor the rest of the performers on the night—among them Shortstuff, Deadboy, and Hot City—that this well-timed booking showcased Edwards at the peak of his acclaim to a sea of admirers old and new.

But Edwards has always had a special place in his heart for London, as a new recent track, the stunning “No Place Like London,” testifies. “I Made ‘No Place Like London’ to show my appreciation for the UK and the love I have been shown for so many years,” he says. “It’s something that I never want to take for granted.”

The famous irony with Todd Edwards is that despite being such an important figure in London music, he was born and bred in the United States. But fortunately, his long-overdue moment has come simultaneously on both sides of the ocean. “Todd Edwards has definitely influenced my production, as evident on ‘Mind Reader,’” offers New York producer/DJ Kingdom. “There are sharp syncopated snares, deep bass, and chopped vocal samples strung into a melody, so the track is very much in his lineage. I love that his music is generally very well balanced. It’s at once melody and poppy, and at the same time dark, swinging, and percussive.”

London’s Hot City is also quick to sing Edwards’ praises: “Not only is [his music] a cut-up collage of sound—his structure is very good, too, using bridges, choruses, and verses in an instrumental dance track. I first heard Todd’s ‘Crazy Love’ remix for MJ Cole, and didn’t think it was that great, but then heard [his remix of Sound of One’s] ‘As I Am’ in a club and tracked it down, realized all his tunes were made that way, and started building my collection from the exchange. He still sounds original today.”

In a 2007 interview with Stylus, one of the few in-depth Edwards interviews on the web, he refers to himself as “a suburbanite, [part of] a typical East Coast Italian family.” The son of a carpet salesman, he started making music around 1992, trying to “emulate what was out there: Roger S, MK, Masters at Work, Todd Terry.”

Edwards went on to develop an instantly recognizable style of his own. With a four-to-the-floor beat as the foundation, he chops vocals—sometimes sung himself, then pitch-shifted—down to the individual syllables to create unique melodies on top. It’s dance music on the surface, but at its heart, Edwards’ music is a sincerely personal form of pop, with its own message (he’s a devout Christian), and masterful adaptation of the traditional verse-chorus-bridge structure.

“Historically, I would have to say [my biggest influence] is Stevie Wonder,” continues Edwards, who has also mentioned Björk and Enya as key influences in the past. “A close cousin of mine gave me Stevie Wonder’s Songs in the Key of Life. I listened to it religiously. If I was never given that album, I would have never composed ‘Saved My Life.’” Edwards’ last LP, Odyssey, featured an entire team of “guest vocalists,” Edwards adopting a different alias for each one. It’s a singular journey in the same vein as Speak for Yourself, the 2005 album by Imogen Heap—another vocalist Edwards admires, and has remixed to glistening effect in the past. “I spent a lot of hours in the studio,” he reflects. “Just me, God, and the sampler.”

Todd’s original productions are only half the story. He’s remixed countless acts in his time, including Daft Punk, Talking Heads, Justice, and All Saints’ Mel B, chopping and cutting the tracks in his trademark style. “He was the first name that came to mind when Fool’s Gold asked me who I wanted to remix ‘Mind Reader,'” says Kingdom. “There are very few significant American contributions to garage music, so I wanted to have him on it. I’m very happy with the results.”

“The Todd-i-fication process is for songs that I really love that I want to fit into my DJ set,” Edwards says of his remix style. “A lot of club tracks may not fit well with a set of Todd tracks [he only plays his own productions when he DJs]. The whole process is about adding a bit of myself to the original without overpowering it… to express what music moved me the most in past and present.”

This is key. Todd Edwards’ music may be driven by an individual journey, but it’s one of tribute—to God, to family, to the music, and music fans who’ve inspired it.

Edwards’ music often has a snow-capped shimmer to it, but this is one of his more colorful outings, with twilight sax and diva vocals. He’s very careful with his cut-up treatment here, retaining the original’s feel.

Famously samples his father’s voice. And just listen to those snares.

One of his very best remixes—the melodies here are something else. You could cut all traces of vocal from this and you’d still have something special.

Far from subtle in its religious rhetoric, this has it all: ecstatic breaths bounce like rows of clouds pushed by piston snares, while a lead vocal tells you to let God into your life. So much detail in the production that it’s exhausting to listen to.

This is a simple masterpiece that Edwards co-produced and sang on, and one of the only songs where his vocals are mostly untouched. In his words, again from the Stylus interview, “If I were on my own, I’d be listening to all the flaws. That’s the good thing about collaboration. It becomes a marriage of trust”