Over just a handful of releases, San Diego, California native Austin Cesear has established a […] 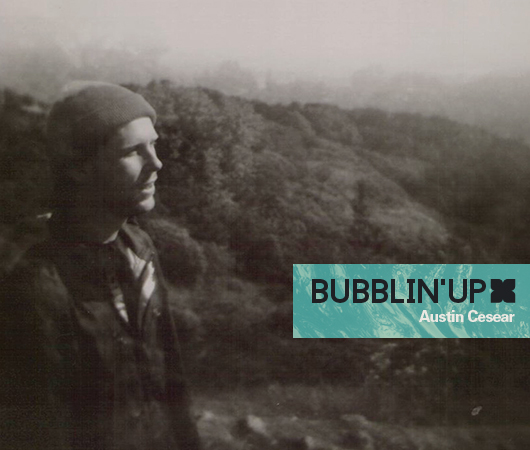 Over just a handful of releases, San Diego, California native Austin Cesear has established a […]

Over just a handful of releases, San Diego, California native Austin Cesear has established a palette that is both unique and highly redolent of his home state. From tracks like “Yep,” with its winding, wavy G-funk repetition, to the dubby, foggy expanse of his Deep Breakfast mixtape and the field recordings of his West Oakland neighborhood on “7HF9B.383348H.382753J,” it’s clear that Cesear has been influenced by his environment. He’s spent much of his brief adult life around the Bay Area, living in San Francisco and Oakland, but when XLR8R contacted him last month, he was actually two weeks away from moving across the country to Brooklyn. For anyone familiar with his music, it’s difficult to conceive what effect this will have on his sound, and Cesear himself seems just as perplexed. “It’s definitely gonna have a difference on my mental state,” he says. “And that’s really what affects how I make my music, is depending on what kind of mood I’m in. It’s hard to say. Maybe I’ll start making dubstep,” he laughs.

Cesear is picky with his output, however, so it will be awhile before his fans find out. “Honestly I’m just trying to stick with Public Information and Proibito right now as far as doing releases,” he says. “If I am making more housey songs, then I’ll end up sending that to Anthony [Naples for Proibito], and if I’m making weird stuff, I’ll be sending that to Public Information. I feel like we’re on the same page, and I respect them and they seem to respect me. I have had [other] people ask me to do stuff, but I don’t like putting out a lot of music.” Still, Cesear recently made an exception to his parent labels with a self-titled split with Stefan Jós for Opal Tapes, which he describes as “almost dedicated to Oakland—it was supposed to be titled We Live Here.” The two producers went to high school together in San Diego, but it wasn’t until after graduating that they realized they had music in common, eventually deciding to split a release. “We didn’t make that release with the intention of putting it out on Opal Tapes, but we sent it to him because we were hoping he would be interested in it, and because he messaged me a little while before that. We just kind of made it for ourselves at first, and [Opal Tapes’ owner] Stephen said, ‘It would be nice to have a little light amongst all the dark.'” Beyond this, Cesear’s next record for Public Information, a mini-LP titled West Side, also promises to pay tribute to life in the Bay. But perhaps it will sound a little bittersweet, given his reasons behind moving to Brooklyn.

“I feel like I’ve kind of done all I can do with [the Bay Area as an influence], so now it’ll be nice to have a completely different change of scene, being in a huge city and always feeling lost, and I’m looking forward to that, ’cause I don’t feel that way a lot in SF or Oakland,” he says. At the same time, Cesear doesn’t sound outright sour about the state of things in the Bay, especially given the extensive praise he heaps on RS94109, his favorite record store in San Francisco and a general hangout spot for him and his friends—he says he’s “blessed” to have experienced it. “It’s really one of the only places in the city that I feel comfortable,” he says. “Just completely. Like you’ll go to bars and clubs and stuff and you’re like, ‘out,’ but it’s different.”

Beyond this, though, one gets the impression that Cesear is simply a young artist restless with his surroundings. “It’s just getting kinda routine. There’s definitely an electronic music scene, and there are a lot of different kinds of electronic music that people are into here. That’s cool, ’cause there’s different parties to go to depending on what you’re into,” he starts. “But what is lacking is, I feel, support, you know? A sense of community, more or less. I’ve never really felt embraced like that. Maybe that’s me not putting that effort into the community, but I don’t know if it’s really there—like people really trying to represent the San Francisco electronic music scene. You’ll go to parties and there’ll be a cool turnout, and then you’ll go to other equally cool parties, and people don’t show up, ’cause maybe they don’t know who’s playing. Instead of just going out and taking a chance, you know?” Cesear insists he isn’t being priced out by wealthy Silicon Valley types, but they are probably having some effect. “The neighborhood that I moved to when I first moved to San Francisco—almost four years ago—wasn’t cheap, but it was affordable, and now if I look for rent there, it’s not even close. It’s almost doubled.” Still, he says, “where I’m going to be moving to in New York is going to be way more expensive than my situation right now.” Whether money is a factor or not, it’s interesting to get some insight into the financial concerns (or lack thereof) of an artist on the rise. Cesear’s set-up is fairly minimal anyway, so it seems he will at least be able to save on studio space.

“The live set is how I make my music, literally. It’s the same way I record my music too. It’s all live. I try to keep it one take. If I’m recording, there might be some overdubs,” he says. “I have a laptop, samples, and I do MIDI sequencing in Ableton. I also have my mixer, a synth, a drum machine, a filter, and effects. It’s mostly improvised, like I have samples that go with each other, and with those samples I’ll have a synth thing, but I try to keep it as loose as possible.” Cesear has no formal musical training, but he credits a high school course for showing him the electronic music ropes:

“I [went to a] public high school, but it was art-focused. They had a MIDI class, and the whole class was basically just Reason. Mostly that class was just [being taught] a new thing in Reason for the first 30 minutes or so, and then we would just do whatever the heck we wanted on Reason for the rest of the class. That’s how I got familiar with MIDI, signal paths, what a filter does, how an envelope works. That [helped] a lot with when I did move to the hardware side, because now I don’t use any plug-ins, or any kind of software really, other than Ableton for samples and recording.”

One of the particulars of Cesear’s sound is his tendency to work with high frequencies, often eschewing bass entirely to wispy, vertiginous effect. “I remember playing ‘Yep,’ from There’s a Crack in Everything, for some friends who were all producers,” Cesear recalls, “and at the end one of them was like, ‘[exasperatedly] that’s it?!’—which is exactly the response I wanted. [laughs] The intention I had was it could be an intro song or something like that. Like that “Holly Street” song on the Opal Tapes record. There’s no bass, but it’s got a beat to it. I haven’t really been doing a lot of that lately, ’cause I’ve been making a lot of songs for the live set, so it’s been actually the opposite, like I’ve been trying to make actual, I guess, dance music. Whereas when I was first playing the live set, I would try to throw in those kind of songs, and that just doesn’t really work if you’re trying to dance. I’m trying to find the balance between them though, because I do want to try to do both.”

As for what happens to the tracks after the jams are completed, he says, “Voyage first, and figure it out later. I don’t really think about them at the time—like what I’m gonna do with them, or where I’m gonna put ’em—but usually, if I make them around the same time, they all can relate to each other.” After all, it seems that Cesear is an artist who prefers to feel things out as he goes, and maybe his music’s vivid expanse has a lot to do with this—it’s easier for an artist to depict their surroundings when he or she isn’t especially preoccupied. With Cesear, we know that West Side will come first, but it’s tantalizing to think what he might come up with once he’s settled into the claustrophobic East.