Bubblin’ Up: Blawan takes post-dubstep and UK house out of its comfort zone.

In the UK bass world, you could safely call Jamie Roberts (a.k.a. Blawan) an overnight […] 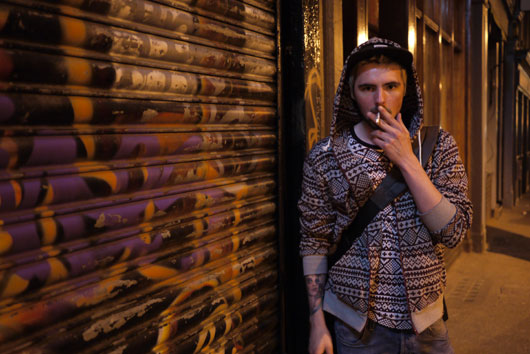 Bubblin’ Up: Blawan takes post-dubstep and UK house out of its comfort zone.

In the UK bass world, you could safely call Jamie Roberts (a.k.a. Blawan) an overnight […]

In the UK bass world, you could safely call Jamie Roberts (a.k.a. Blawan) an overnight success. Before he was on anyone’s radar, he sent tracks to Untold and Pariah, and immediately scored releases on Hessle Audio and R&S, two of electronic music’s most revered labels. “I am not gonna lie—I think I’m really lucky to have been able to get a foothold in this scene,” admits Roberts. “When I think back, looking from the outside of it all, the fact that everyone seemed to know each other, [it] was a totally scary place to try and get a foot in the door.” Roberts countered those fears with an inspired blend of garage, dubstep, and acid, all of which caught the attention of his peers and placed him prominently among the UK’s top up-and-coming producers.

Although Roberts now resides in London, amongst a bevy of like-minded musicians, he grew up in the northern UK, in a town called Barnsley in South Yorkshire, where he began playing drums at age 10, and, with the help of his school teachers, began making electronic music in high school. He’s played drums in everything from orchestras to post-punk bands, but it was his interest in club music that pushed his creativity to where it is now. “I’ve always had a big love for house and techno music,” he explains. “Producing dance music was a totally natural progression for me.”

His first release as Blawan on Hessle Audio, “Fram” b/w “Iddy,” burst onto the UK bass scene with a new perspective on the genre-blurring sounds of its contemporaries. The release channels funky, dubstep, and garage, though with a lean quality that allows it to work on multiple levels. Both “Fram” and “Iddy” are simultaneously headphone listeners and club shakers—each with punchy rhythms and deep lows that manage to come through brilliantly in all kinds of settings—a distinction not often achieved in dance music. But while that one may have sounded like the next evolution of dubstep, Blawan’s next release, the Bohla EP on R&S, changed all preconceived notions as he channeled house, acid, techno, and other dancier sounds. “If you think you found your comfort zone in making music, then for me, personally, I’d suggest you stop,” says Roberts, imperatively. “I see no point in staying within a certain zone. Take Ramadanman, for instance: His back catalog is so varied and diverse, every release has pushed his sound forward, and, for me, there’s no wonder he’s smacking it hard at the moment.”

Where Blawan is headed, only he knows, but be sure he’s not looking to be the new face of acid. “For me, [the Bohla EP] was just some good sounds I was playing around with. I am definitely not on a mission to revive the 303 sound,” he warns. “The releases that are scheduled for this year are quite different from one another, which is brilliant for me. I just hope people are feeling them, too.”

The Bohla EP is out now on R&S.