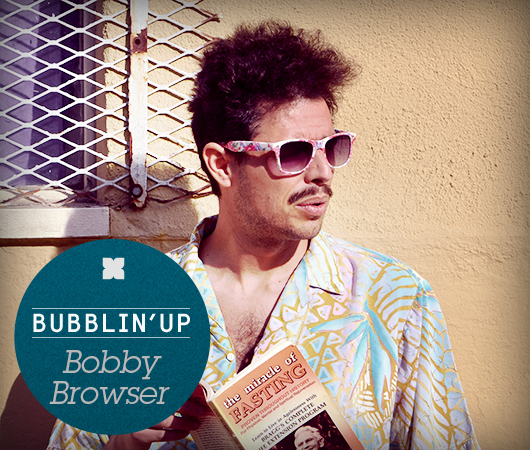 It wasn’t until January 2012 that Oakland resident Andre Ferreira officially stepped out on his own as Bobby Browser with a four-track EP for the then-year-old 100% Silk label. In truth, Ferreira had been toying around with electronic music for some time before then, floating around in a variety of Bay Area outfits and working under a number of different aliases, each one bent on a separate form of hardware-born dance music. In what seems like a rather rare progression, Ferreira actually honed his chops in the live arena before ever focusing on his recorded material, only occasionally burning CD-Rs for friends or to hand out at shows. Nevertheless, when he finally did decide to make a proper record—the breezy Just Browsing EP—it proved to be worth the wait.

“Bobby Browser was the acid house [project],” Ferreira explains when asked about the origin of his alias. Speaking from his current home nestled in the somewhat unsavory Lower Bottoms neighborhood of West Oakland, Ferreira is referencing his time spent in a group known as Party Effects—a rotating quartet of hardware-obsessed performers who took on a variety of different names and styles in order to make the crew appear even larger. Browser was one of Ferreira’s handful of characters, and the one who would lay into a variety of synths and drum machines (in his words, “a lot of old Roland stuff—TR-707, TR-606, TR-727, DR-110, Xoxbox, SH-101”) in order to craft acid-minded house live at different parties and venues throughout the Bay.

While Bobby Browser’s origins may start there, Ferreira had spent a considerable amount of time exploring his musical curiosity in the years before that, picking up a guitar shortly after beginning college at San Francisco State, and eventually discovering he was much more interested in tweaking pedals than practicing chords. While his tastes soon found themselves veering away from traditional band fare, Ferreira tells of a trip to Europe in 2006 that really turned him onto electronic music. “In every club [in Europe] you’d hear the same sort-of-cheesy house music. In each country, everyone liked the same two Bob Sinclar songs, and they’d play them on the radio and in every club over and over and over again.” Ferreira is quick to point out that he doesn’t necessarily hold those songs up as master works of electronic production, but he does feel that something about their universal appeal helped draw him to dance music. That interest was reinforced on the same trip by a borrowed iPod which Ferreira and his travel buddy frequently turned to throughout their adventure; full of “Aphex Twin, Kraftwerk, Groove Armada, and other kinds of well-known electronic stuff,” this loaned portable music library helped spawn a new fascination with dance music.

In 2010 and 2011, after spending a couple of years as a member of Party Effects and investigating mostly acid-obsessed territory as Bobby Browser, Ferreira began to shift his focus. “Making acid tracks can be a lot of fun and I like that kind of music a lot,” he explains. “But at a certain point, you just get a little tired of that sound palette, which is why I started to move towards samplers.” As he began experimenting with new equipment and navigating toward a new sound, the Oakland resident eventually found a good deal of inspiration from the work of Lone. “I hadn’t heard much Lone until a bit before I made the [first Bobby Browser] EP. At first I hated his music—I thought it was just a terrible abomination,” laughs Ferreira. “One day though, I was driving around in my car and it was summertime and I was like, ‘Wow, this is really nice.’ It struck me as some sort of cartoon house, and then I thought that would be something to go for, so I started to investigate that territory; I wanted to make some happy and fun songs.”

A few months later, Ferreira recorded the songs that would become the Just Browsing EP—a four-track effort whose airy house tunes were touched by a subtle infusion of funk and disco. “That was a turning point. It was my first time actually recording something,” tells Ferreira. “I had recorded stuff onto a four-track before and I had tried multitracking, but I didn’t really understand it. I could make a whole track on the equipment, but when it came to recording it, I didn’t really know where to start.” Fortunately, his frequent collaborator Greg Zifcak did, and he helped teach Ferreira the process and record the parts which would become Bobby Browser’s debut for 100% Silk.

Though it took over a year for the second Bobby Browser EP to appear, Ferreira says he largely wanted Still Browsing—a record which also saw release via Amanda Brown’s 100% Silk label in March of this year—to be a continuation of the self-proclaimed “lovey dovey,” “adult-contemporary house” territory his debut effort explored. “[100%] Silk has been so cool to me and helped shape my direction in some ways. When I made that first EP, it was sort of just random,” relays Ferreira. “Then, when I started working on another one for them, I wanted to pick up that aesthetic a little bit, but make it nicer.” He goes on to explain, “Now, in terms of recording, that has become the sound I go for. I need something to focus on, otherwise I’ll end up going in too many directions when I work on tracks.”

With only two EPs to his name in as many years, Ferreira seems primed to pick up the pace a bit, though he doesn’t exactly have detailed plans in place to make this happen. He’s slightly vague when asked about the future of Bobby Browser, mentioning that a 12″ or two may be on the way as well as another possible EP for 100% Silk. “I like little trilogies for some reason, and I think it might be cool to do three EPs and some 12″s, then maybe morph into something else,” he says. Though Ferreira has a rather sizable arsenal of tracks filed away for his live sets, many of them he feels do not translate to record. “Sometimes I’ll have a great song that works live, but when I sit down and actually listen to the individual sounds, it just sounds horrible because I did some weird shit or I sampled from YouTube or something; it’s a give and take.” Perhaps this is what has kept his recorded output to such a trickle so far. His long-term goals too seem to take a similarly relaxed approach to defining his future: “I just want to travel, release music, meet cool people—that’s about it really.” It’s an outlook that serves as an apropos reflection on the music Ferreira makes—soulful house that is somehow as effortlessly carefree as its maker appears to be.