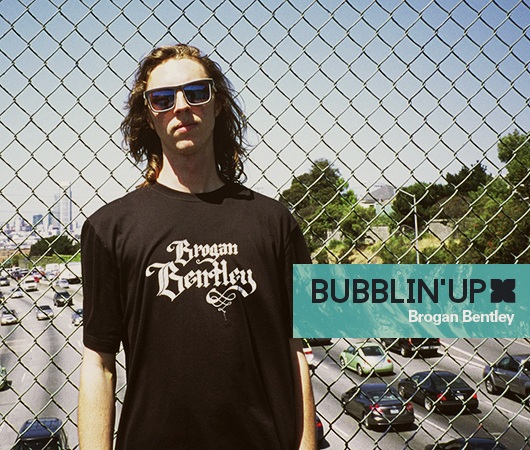 Residing near the beach in San Francisco’s Sunset district, 25-year-old producer Brogan Bentley has chosen to stay put in a city that many musicians have deserted. “People are leaving, there’s an exodus,” he says from his home. “Everyone’s gone to New York or LA. I’m from LA, and I’ve been up here for close to a decade now, so I’m just riding it out. I don’t even know where the next step is, but I’m here and I sense that I’m supposed to be here.”

Just as the experimental beat scene was taking off in Los Angeles, Bentley moved to San Francisco as an incoming college freshman. Instead of pulling inspiration from a community of like-minded musicians, he found himself isolated within SF’s creative landscape. However, after years of making music and playing local shows in relative obscurity, a close friend working at LA’s non-profit radio station Dublab passed Bentley’s songs to Matthew McQueen (a.k.a. Matthewdavid), co-founder of Leaving Records. “Matthew got in touch with me and wanted some stuff and I just waited so long to give him anything,” Bentley recounts. “Finally, I gave him a bunch of stuff, and these three songs I guess really stuck.”

Those initial cuts served as Bentley’s 2012 debut for the LA imprint—a limited cassette of hybrid, hazy beats brimming with vocal samples titled Brogan Bentley. All of a sudden, the young producer found himself in the midst of Leaving’s genuinely eclectic roster, humbled by encouragement from musical heroes (and now labelmates) like McQueen and Jimmy Tamborello (a.k.a. Dntel). Since then, Bentley has had the chance to play a string of high-profile bills in San Francisco with the likes of Andy Stott, Jacques Greene, Prefuse 73, and Teebs.

Growing up, music was vital for the entire Bentley family. His father enjoyed visiting record stores and was an avid fan of psychedelic bands like the 13th Floor Elevators; his mother loved to sing. As far back as the 1930s, Bentley’s grandparents on his mother’s side were both jazz musicians in the SF Bay area. His grandmother even penned a song for Nat King Cole called “I Get Sentimental Over Nothing” in 1949. At 98 years old, she composes new music on her keyboard to this day. “My mom actually records the music; my grandma will write a bunch of songs, and my mom will go into a studio and they’ll get session musicians, and then they’ll record it,” Bentley says with pride. “And they’ve done two albums thus far. And then I’ll get the acapellas and sample my mom’s voice, of her singing music that my grandma wrote.”

Bentley started playing guitar when he was eight years old; around the age of 12, he learned the bass and began recording experiments onto tape decks. After falling in love with psychedelic and dub sounds, he discovered the stranger side of electronic music. His bedroom studio continued to expand, and by the end of high school, he was creating music on a laptop using an assortment of software and hardware. During those formative years, he was also frequenting DJ nights in the city with his friends. “I was seeing some really heavy stuff back in high school, like UK DJs would come to LA and play these tiny parties across the street from the Hollywood Forever Cemetery,” he says. “I saw Dizzee Rascal when I was like 17 in LA, and it blew my mind. Such energy, such raw energy. That turned me onto a lot of music. I dove pretty deep into some UK stuff early on.”

The British influence on Bentley’s debut LP, The Snake, is unmistakable. Taking sonic cues from Burial, classic jungle, and other UK-born styles, the young producer bathes his haunted productions in the warm, optimistic glow of the West Coast. There’s a laid-back spirituality permeating the fog and darkness of cuts like “Heal” and “St. John,” along with a healthy amount of soulful, sampled vocals. These heavy-hearted but uplifting vocal snippets carry his music somewhere more thoughtful than electronic artists are usually willing to go. Bentley even features his own voice on “St. John” and opener “The Difference,” delivering pensive R&B harmonies with a hymnal timbre. “Voice is just something so special to me,” he says. “My mother has a beautiful voice, and I can just hear her singing in my head right now. Always had her voice around growing up.”

For Bentley, titling his LP The Snake was an obvious choice. On a surface level, most of the album was recorded in 2013, the Year of the Snake under the Chinese zodiac. Bentley was also born during a snake year, which might be why he is so fascinated by the creature’s infamous mythology throughout time. He cites The Cosmic Serpent—a non-fiction book by Jeremy Narby that investigates a connection between snakes, DNA, and the cosmos—as an influence on his creative outlook. During the album’s creation, he was able to experiment in a way that one song would inspire another sound, which often led to an entirely new song. Late at night, he would also walk around San Francisco and be struck by melodies out of nowhere. He’d hum these notes into his phone, come back to the studio, and recreate the rough idea on his computer. These unexpected sounds became the foundation for many tracks on The Snake.

Bentley wasn’t raised going to church, but coming from such a musically attuned family, he did find solace and spiritual communion in song. At home, he was exposed to old English ballads, blues, jazz, bluegrass, and styles from around the world, but he always connected with any music that had a timeless, reverential aura. These days, he finds that quality in everything from grime to chopped ‘n’ screwed to dub techno, all of which inform his spastic, yet reflective sound. “It can be stripped-down stuff and it can be really lush arrangements, whatever, but it’s just got this heart to it and it’s so undeniable,” he says. “That feeling transcends genre—every different style can possess that.”