Towards the end of our interview, Berlin-based producer Joe Seaton (a.k.a. Call Super) begins to […] 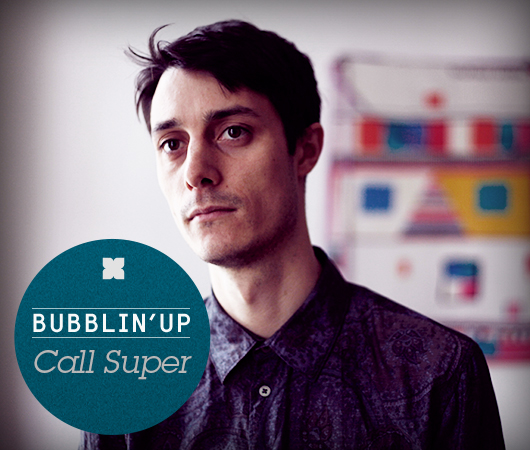 Towards the end of our interview, Berlin-based producer Joe Seaton (a.k.a. Call Super) begins to […]

Towards the end of our interview, Berlin-based producer Joe Seaton (a.k.a. Call Super) begins to look a little concerned about the naturally introductory nature of our Bubblin’ Up series. “I don’t know how interesting any of that is going to be,” he explains. “I think a lot of people have the same kind of backstory.” He has something of a point—as a British-born electronic musician now residing in Berlin, one schooled in dance music from a young age by his older brother’s friends, his pre-history as a producer is far from unique. Yet his apparent concern about revealing too much of his personal history is, perhaps, indicative of something deeper in terms of his approach to making music.

In conversation, while he’s by no means a difficult interview (he’s polite, friendly, and engaging throughout), one gets the impression that Seaton is constantly concerned about maintaining aesthetic control over the way both he and his music are represented. It’s a notion he seems to touch on late in our conversation, when discussing the concept of aliases in electronic music: “I like that old-fashioned view of people who make electronic music, not hiding behind masks or anything, but just keeping people guessing,” he says. “I kind of can’t stand this idea of seeing yourself as some kind of commodity that has to be developed. For me, that goes against the fundamentals of people making music on their own. I think you should have the freedom to present stuff as a blank canvas, so that when people see you they don’t necessarily know what they’re going to get.”

If we were to speculate based on his background (which, given his concern, is perhaps precisely what Seaton is trying to avoid), we’d suggest that the roots of this slightly holistic approach to musical identity may be grounded in Seaton’s artistic heritage. He comes from a long line of artists and creatives—his great grandmother, grandmother, and grandfather were all painters, and his father is an art-school teacher and clarinet player. Seaton himself, prior to moving to Germany, attended art college in London for a time before switching universities because, in his words, “It was something I’d rather do in my own time, and if I’m going to spend the money, as I didn’t really have any support, I might as well do something that I’m not doing anyway.” His relationship with music, meanwhile, stretches back to picking up the guitar around the age of five, which ultimately led to an interest in studio technology and formative experiments with classic Roland grooveboxes in his teens.

Still, despite his early introduction to dance music, prior to this year, Seaton’s career as a producer has been somewhat fractured, not to mention littered with several false starts and changes of focus. Shortly after relocating to Berlin in 2009, he released the first of a short string of impressive, under-the-radar house tunes under the name JR Seaton on his own, ultimately short-lived label Nocturnes. The first release from Call Super, which Seaton originally founded as a duo alongside friend Matt Waites, appeared two years later on Five Easy Pieces. However, following the release of that debut EP, Staircase, Waites drifted away from the project and Seaton elected to continue as Call Super alone, releasing a pair of slightly darker tracks on New York label Throne of Blood towards the tail end of last year. Still, it was when he re-emerged in February of this year with The Present Tense, the debut release from new Fabric offshoot label Houndstooth, that Seaton’s work as Call Super really came into its own. While there was always much to like in his previous releases, both The Present Tense and last month’s follow-up, Black Octagons, felt like a significant step up. Both set their sights beyond the house-tinged and dancefloor-focused feel of his earlier compositions in favor of creating conceptually complete packages of ambitious and textually rich techno.

It might be tenuous to try and trace the more refined characteristics of the Call Super project back to Seaton’s artistic family backdrop, but it’s certainly interesting, and perhaps telling, that he repeatedly relies on artistic analogies when discussing his creative process. “It’s very much like, I don’t know, making a pot, I guess,” he explains. “You put some clay on the wheel and you just manipulate it until you have a structure that you like, and then you retouch it. I think there are lots of analogies that can be drawn between artistic processes, and for me, that’s very much where making music slots in. For me, it’s about a signal path; it’s about generating some sound with a synth or a drum machine and sending it through various bits of equipment and I manipulate it and I mold it.”.

The physical process of creating music clearly plays an important role in Seaton’s musical outlook. In describing the roots of his current sound, he touches on an interesting, almost deterministic notion that the shape of his output as Call Super is as much influenced by his seemingly haphazard acquisition of studio gear as any conscious creative decisions. “I’m not interested in any kind of debates about which kind of process is better or worse,” he says. “I believe I have the bits of gear that I have just because I’ve come into them. I’ve never thought, ‘I have to get that particular bit of kit.’ It’s always been things like, some friend of a friend is getting rid of a mixer, I need a mixer, or I saw an advert on Gumtree for a guy down the road who wanted to get rid of an old synth. All of my bits of gear have that kind of story, so I kind of feel like I was meant to have these bits of kit. Some of them are rubbish, some of them are really good, but this is just what I have, this is my tool kit, my paint box or whatever. It’s like that with my record bag too; I have those records and they’re what defines me as a DJ as much as anything that I do. I have these bits of gear in my studio and the way I use them defines my sound.”

Whatever the root of it, it’s the sense of aesthetic completeness that makes Seaton’s recent Call Super releases so exciting. While he’s quick to rebuff the notion of grand concepts or overblown artistic statements, both of his recent EPs are clearly the work of a musician with ambitions that go beyond the isolated functionality of floor-focused techno one-offs; they’re the work of someone interested in building a musical career with more substance to it. For Seaton, it seems to all comes down to a desire to create something of value; when discussing both releases and musical aliases, he repeatedly returns to the notion of wanting to nurture something of worth amidst the inherently fleeting backdrop of dance music. “How music is presented is important to me,” he says. “Making and putting out a record means a lot to me, and we live—without wanting to sound too grandiose—at a time when there’s such a wealth of content and output that it feels, certainly to me, like culture sort of eats itself. It’s extraordinary, you can’t keep up. It’s important, just for my own sense of worth, in that huge, huge morass of content, to put things out which reflect some kind of identity. This isn’t like a concept record. I kind of admire the old ’70s sense of the concept record—of course, I wouldn’t really ever want to do anything quite like that—but it’s cool that people valued what they did so much, and the presentation was really important. I think that’s very important, otherwise it’s just another disposable club thing. Which I guess is what it is anyway.”