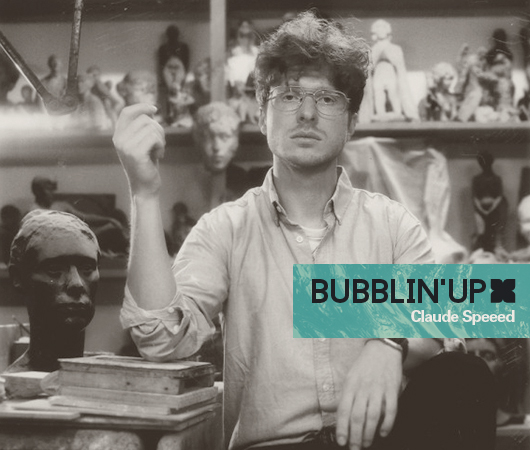 Born and raised in the Edinburgh area and a long-standing member of Glasgow’s celebrated LuckyMe collective, Stuart Turner has already racked up several musical lives. A past or present member of countless bands, most notably LuckyMe’s resident ‘synthetic rock’ band American Men and the “99% imaginary” Russia (“we existed for five years and had loads of songs but only ever played two gigs”), the now Berlin-based artist has spent the past few years focusing on spectral electronics via his solo Claude Speeed project. The breadth of his musical abilities and interests suggests a childhood awash with music and classical training, but in reality, his early musical development was far less conventional.

“I really didn’t like music much as a child,” he says. “I associated it with shit stadium rock and felt like it wasn’t anything to do with me. Little things here and there began to change that eventually, like going on holiday to France with my family with a walkman and three tapes. One of them was Fleetwood Mac and I remember really enjoying that but somehow not thinking that’s what music was. I liked computer music as well. My dad and his mates were videogame hackers and would get together and try to break the security on games as a challenge, and when they’d done it, they’d make what would now be known as chiptune music for the game menus. I think it was this synthetic, weird music that first made me think that maybe I actually liked music. Even then though, I had no interest in learning an instrument.”

However, as he got older, peer pressure eventually succeeded where parental influence and the inspirational power of musical history had failed. “I started listening to and liking hip-hop in my early teens,” he says, “but I didn’t consider me making hip-hop to be a realistic thing, whereas when I got into rock music, I felt maybe I could do that myself. What got me started though was meeting people who were already in bands and being in the position where I literally had to start playing guitar if I wanted to hang about with them.”

Regardless of his inauspicious beginnings, My Skeleton, the debut Claude Speeed album that came out via LuckyMe on July 28, makes it clear the Scottish artist has made something of a quantum leap since the days when playing music was a merely a way for him to fit in and improve his social life. The LP offers an immersive suite of Phillip Glass- and Steve Reich-evoking soundscapes, and the circumstances surrounding its creation only add to the intrigue. In early 2012, having quit his job as a corporate lawyer and fresh off a stint at the Red Bull Music Academy in Madrid, Turner set off to travel in Asia, taking only a few kilos of luggage with him, including a laptop, headphones, and a field recorder.

“I worked in bursts,” he says. “It wasn’t a case of doing it little by little as I went along. I only remember writing stuff about three times in the eight or nine months I was in Asia. I would do nothing for weeks and weeks but then I’d have moments like when I was staying with some friends of friends in Singapore and I sat down with my laptop on their sofa and knocked out five songs in one session, four of which made it onto My Skeleton in one form or another.”

This bare-bones approach to writing may have been an obvious necessity when making music in such transient circumstances, but it also fed into one his most notable traits as an artist: a deep aversion to gear fetishism. Turner has said that he wants his music to be “consumed like fast food—played loud on cheap white earphones.” It’s a stance he seems pretty committed to, and one that makes plenty of sense when explained further.

“I’m exhausted by the idea that you always have to have to ‘appreciate’ things, that you have to drink the very best coffee, or use the very best headphones or the very best modular synth or whatever.” He continues, “In the past, I’ve exhausted myself trying to find good headphones, and that feeling is where the anti-gear stuff comes from probably. I’m into things being pretty normal, so to me, the test is whether music will sound good in a Renault Twingo. I don’t see the point of making something that sounds good in a studio but rubbish in a shitty little car. It’s about keeping an eye on reality and keeping what you do relevant to normal people like me.”

Following his travels in the Far East, Turner landed in Berlin, where he ultimately finished and mixed My Skeleton. The huge difference between the environments in which the record’s songs were written and mixed led Turner to note that “it’s almost like the songs were written by one person and mixed by another. I wrote them in oppressive heat, while trying to deal with the lethargy that that creates, so they initially came out quite dense and heavy and slowed-down. Contrast that with mixing it in various freezing rooms in Berlin, feeling quite cold and depressed. I could remember how I felt when I wrote the songs, but with the environment in which I was mixing them, it felt appropriate to treat them in a certain way.” As disorienting as this change must have been, the influences of the two environments are blended with skill on the album, as the exotic field recordings and woozy, heat-exhausted pace of the music have been subtly offset by a sort of a chilly grandeur that evokes images of slow walks along frost-covered avenues in Northern Europe.

Beyond its music, the LP’s visual aesthetics, and the fixations behind them, are also worthy of note. My Skeleton‘s sleeve is awash with imagery related to business and financial success—a fancy watch, sunglasses, shiny shoes, expensive cologne, business cards, and the like. As Turner explains, the images represent a continuation of a fascination that has been with him for many years. “[When I was playing] with Russia, we always imagined ourselves as being really successful, stressed-out New York businessmen, and we applied this business aesthetic to everything. It wasn’t that we were guys in suits like Kraftwerk, more that we were these high-powered, new-money assholes wanting to blow off steam by making very professional rock music.”

“I’m still incredibly drawn to that,” he explains. “I’ve had jobs in that kind of world, and what fascinates me is that most of the people involved in it don’t know how absurd that life is. I’m really interested in it because I think it’s a bit unexplored—with American Psycho, it’s just used as a device; there’s this bored businessman who imagines himself as a serial killer. But there’s something about the banality of people who just make money and show off that I constantly come back to.”

Looking ahead, Turner doesn’t want to discuss the long-brewing project he has in the pipeline for Planet Mu in too much detail for now, but he will say that “there’s something finished for them that’s going to sound a lot different to how it would have sounded if it had been released two years ago.” That’s not all that’s been keeping him busy, either. Last year, he shared a well received remix of Martyn’s epic “We Are You in the Future,” and followed that by contributing to the Warp x Tate evening at Tate Britain. Over the summer, he’s playing a smattering of carefully selected shows, including a quintessentially Berlin-sounding one that will take place in someone’s living room. He’s also planning to continue making music, and even hints that there could be a slight easing of his anti-gear fanaticism down the line. “Maybe after making this record this way, I’ll finally allow myself to mess around with some hardware for a little while,” he says. “Just to see if it’s as awful as I always thought it would be.”