Calling Dauwd a late bloomer wouldn’t be entirely off the mark; born in the US […] 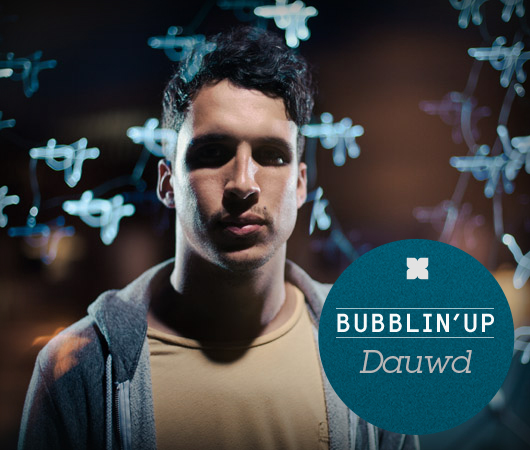 Calling Dauwd a late bloomer wouldn’t be entirely off the mark; born in the US […]

Calling Dauwd a late bloomer wouldn’t be entirely off the mark; born in the US and raised in rural Wales, the producer, born Dauwd al-Hilali, spent a chunk of his formative years in a virtual bubble, detached from electronic music. “It was a drawback and a blessing,” Dauwd says. Despite his rural upbringing rendering him “a bit unaware” of the newest musical trends and scenes, it could also be interpreted as a boon; his resulting lack of musical role models kept him from becoming tethered to any particular genre or sound, while the relative remoteness of his hometown (the nearest record shop was, as he remembers it, at least a two-hour drive away) taught him to be resourceful with whatever was available to him—namely, a copy of Cubase that he obtained from his school’s music class at age 13.

Nowadays, many would be hard-pressed to imagine that Dauwd, an up-and-comer whose output occupies a confluence between the propulsive, stomping rhythms of house and techno as well as the shuffling sounds of garage, had such humble beginnings. A childhood spent off the musical grid, so to speak, only seems to have made his current musical taste that much more rich and diverse; he lists the sounds of DJ Koze, assorted Dan Snaith projects (Caribou, Daphni), Com Truise, Matthew Dear, and the label Public Information as being among some of his favorites.

Beneath the surface, however, not too much has changed. “Between when I first started producing and now, it’s still the same,” Dauwd says of his creative process, which, despite continuing to grow and mature, still features a strong focus on rhythm and melody, not to mention a heavy emphasis on found sounds and samples. “It’s a domino effect,” he says. “I’ll try to find and manipulate sounds for a track, which then might inspire my next track.”

Following his initial experiments with Cubase, Dauwd quickly moved on to FL Studio, using a copy a friend had given him. It was Dauwd’s college and university days, however, that would guide him into becoming the artist he is today. A stint spent attending college for electrical engineering at the University of Liverpool exposed him to a glut of new music—and, by extension, a litany of influences and sounds from which to draw inspiration. His current home in South London, where he also has his own studio, has only magnified the effect.

In 2011, Adult Swim featured Dauwd’s track “Ikopol,” a tastefully sample-laden and understated garage-meets-minimal-house roller on its Unclassified compilation, a collection that also included contributions from more established acts like xxxy, Geiom, and Burial. That same year, a busy one for Dauwd, also featured two releases from the budding producer: What’s There and “Could It Be” b/w “Shimmer.” The former, which featured “Ikopol” as its b-side, was centered around many of the same tropes and themes, with the shuffling rhythms and rich, skyward synths of “What’s There” and the tight syncopation of “Aciream” pushing Dauwd’s sound ostensibly into garage territory. “Could It Be,” with its energetic synth squelches, moved in a similar fashion, but its b-side, “Shimmer,” an excursion into blissful, minimalist house, proved that Dauwd was more than just a one-trick pony.

Soon after, however, Dauwd’s prolific streak seemed to peter out, as the months without new original singles and EPs from the producer began to grow in number. “At the time, I thought I should’ve worked more to fill that void,” he says. “But a lot of people just release whatever they make.” Taking a more behind-the-scenes role as both a remixer and DJ—a passion that was first sparked by nights spent playing music at friends’ parties—Dauwd spent the next year or so putting forth a slew of mixes and honing his craft. Last May, he appeared on the Boiler Room, delivering a 50-minute set that included, amongst other tracks, the title cut from his upcoming EP, Heat Division. The four-track effort is his first release since 2011, and will be dropping in March as a joint venture between his home label, Pictures Music, and Ghostly International.

At first glance, Ghostly—an imprint best known for experimental pop and techno—may seem like an odd place for Dauwd’s brand of garage-leaning house, but the producer’s decision to release through the label was motivated by a deep respect for its artists and sounds. “I’m a huge fan of Com Truise, Matthew Dear, and Gold Panda, who was a big inspiration in my early days,” he says. “I’m very proud to be a part of this.” Heat Division also features a notable shift in Dauwd’s sound, eschewing most of his more overt garage leanings in favor of more straightforward house with techno underpinnings. The title track, a prime example of this change, boasts a bass-heavy 4/4 beat coupled with wonky synth triplets. That said, not all traces of Dauwd’s past have been cast aside; EP cut “And” is a spiraling, synth-laden, and garage-tinged number that harkens back to the producer’s previous sound.

Heat Division undoubtedly marks a sort of milestone in Dauwd’s young career, but it seems that other big things are also in the works. In addition to some upcoming US tour dates, there’s a remix on the way for Kompakt, as well as the possibility that more will come soon. “I can’t name names just yet,” he says. With any luck, we may also see more original material as well.

“It was just my own neuroses,” Dauwd says, describing the lull after his last two releases. “I think it’s time to be prolific.”