Ramon Quezada (a.k.a. DJ QU) lives and breathes house music, even if he’s not exactly […] 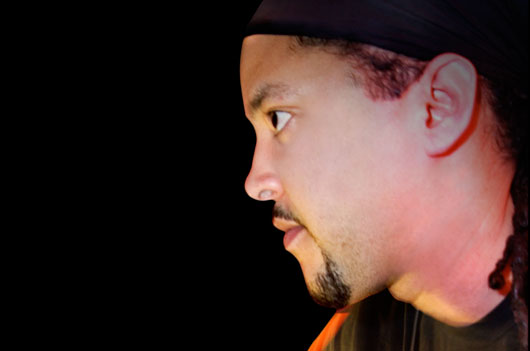 Ramon Quezada (a.k.a. DJ QU) lives and breathes house music, even if he’s not exactly […]

Ramon Quezada (a.k.a. DJ QU) lives and breathes house music, even if he’s not exactly sure what it is anymore. “House and techno used to be the one thing,” he says. “Now, Derrick May is techno and Kerri Chandler is house, but I never saw the difference.” As far as he’s concerned, if the music can be traced in some way to the deep house that first began to emerge from Chicago in the late ’80s, then it’s suitable for his record bag. Often lauded as a DJ’s DJ, Quezada also heads up his own Strength Music imprint, a label that’s low on hype, high on quality, and home to releases from deep-house luminaries such as Jus-Ed and Fred P., not to mention a myriad of records from DJ QU himself.

Quezada’s love for house music began in his native New Jersey, where his initial passion manifested itself via his participation in competitive house dancing. House dancing? Quezada is amused by the confusion as to what exactly house dancing is. “Where I grew up, everyone knew what house dancing was, but now I have to keep explaining it,” he says. Imagine something akin to hip-hop’s B-Boy and breakdance culture, albeit with a house-music soundtrack, and that’s what occupied much of Quezada’s youthful years. To be clear, it had nothing to do with raving, a separate scene which was undeniably popping at the time. “I had a perception of raving as not what we were into, that the music and the style was not what we were into, that the kids there were there to do drugs and try to party for two days straight.” Quezada does make a point to qualify this statement, continuing, “I didn’t really step into raving, so I could be totally wrong, but that was the perception.”

Regardless, Quezada’s hardcore dancing days eventually faded. Although he does occasionally still make his way onto the dancefloor and “get a sweat on,” as he puts it, he eventually made the transition behind the decks and became DJ QU. After years of honing his craft, he also started making his own tracks, although his early efforts were hampered by a lack of equipment, and, more importantly, funds. Thankfully, those days are behind him. “I was in financial ruin for half of my life,” he deadpans, “but I’m good now.”

In the midst of his studio learning curve, he launched Strength Music, primarily as an outlet for himself. For Quezada, nothing is more important than being able to release his own music on his own timeline. “I never want to hear the words, ‘It’s good, but…,'” he says with a laugh. After dropping a series of singles over the past few years, in May he finally released his first full-length album, Gymnastics, an effort Quezada says was more than a year in the making. Highlights include the gurgling acid pulse and menacing vocal loops of “Get Sum,” the angular synth and loosely funky piano melody of “Slidin Thru,” and the workmanlike funk and infectiously off-kilter squeal of “Mixing Room.” Gymnastics is an incredibly detailed, fully realized album, and now that it’s complete, DJ QU in no rush to make another, although he promises more 12″s are in the pipeline, along with some new additions to the Strength roster.

Beyond that, Quezada continues to maintain a busy DJ schedule, and although he’s an unabashed vinyl purist, his approach to DJing is anything but static. “When I was younger and DJing in my bedroom, it was all about the deepest or most obscure tracks,” he says. “Lots of people work a 40-hour week and when they go out, they don’t want to think about the music that’s being played. A good DJ should be able to accommodate that.” That approach is apparently serving him well, as he’s increasingly traveling the globe to spread his deep-house gospel. Yet he also remains hopeful about the state of nightlife back home, saying “New York isn’t where it was 15 years ago, but I feel like it’s starting to get back to that late-’80s/early-’90s place, with loft parties and people going out for the music.” For Quezada, it really is about the music—house music, to be exact.