The members of Barcelona-by-way-of-France duo Downliners Sekt are hardly newcomers to making music. In fact, […] 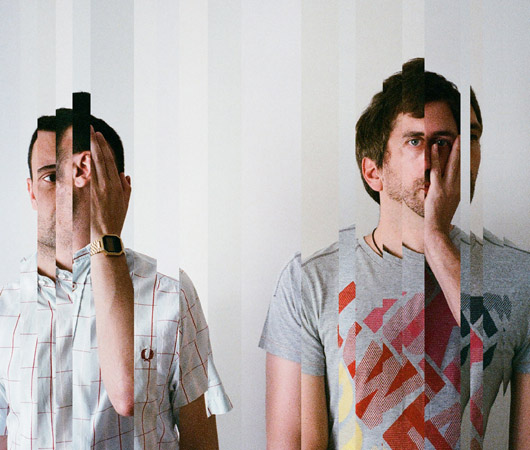 The members of Barcelona-by-way-of-France duo Downliners Sekt are hardly newcomers to making music. In fact, […]

The members of Barcelona-by-way-of-France duo Downliners Sekt are hardly newcomers to making music. In fact, the outfit, which has taken on a variety of different formations and sonic aims over the years, has a discography that reaches back almost a decade. Still, it wasn’t until the remaining pair of members found themselves in Barcelona a little over three years ago that the group began crafting the trilogy of free EPs which would serve to propel them onto the radar of forward-thinking electronic music heads. Now, with a new single for the Parisian imprint Infiné just behind them, and a full-length for the same label in the works for next year, Downliners Sekt hopes its fate as an eternal “up-and-comer” is about to change.

“For us, it’s been very complicated to get where we are now. We’ve had a history of being in the wrong place at the wrong moment,” says one of the group’s members (at this point, they both have elected to keep their real names separate from the project). Even as they cite the string of bad luck that has tended to befall them—labels falling apart as they finished albums, girlfriends leaving them after moments of success, and even lamenting a chance to write a song for Darren Aronofsky’s Black Swan film which ultimately led to nothing—the pair is far from bitter, and is maybe even a bit optimistic about the continually clean slate being seen as a “new outfit” has afforded them. In 2004, when the group’s debut LP was set to be released, Downliners Sekt was a much different group, one built from a larger collective of musicians and focused on a wider range of perceivable influences—sprawling shoegaze and rumbling drum & bass among them. As the group progressed and changed shape, a stronger lean towards electronics took hold, as one member explains, “When we were teenagers, it was cheaper to play instruments than make electronic music because the MPC and the synthesizer were really out of reach. Then, 10 years later, the story was really different,” jokingly adding, “We’ve always been poor people and this transition [towards electronics] came, in part, because of the economic conditions of the moment. Once we realized that with a PC and a MIDI keyboard you could start producing real work, then we set our attention to that.”

Jump forward to 2010, when the first record in the group’s trilogy of free, four-track EPs, Hello Lonely, Hold the Nation, touched down on the pair’s website. Wrapped in haunting tones and intricate textures, the EP appeared caught between Rhythm & Sound-style dub and the darker veins of the bass and post-dubstep sounds emerging at the time. In truth, the effort placed an unexpected twist on those formulas, valuing intense sound structures and jarring rhythms rather than any sort of dancefloor relevance, all of which was rendered intensely powerful by the constant presence of massive low end (an effect further highlighted by the closing track’s fitting vocal sample proclaiming the healing power of bass frequencies). According to the pair, the act of putting the first EP on the web for free was not a grand statement about internet freedom or a direct attempt to break down the walls between artists and listeners. Instead, the decision came as a result of the frustration Downliners Sekt had encountered dealing with traditional labels, combined with a sense that the group’s time to make relevant music could be up at any moment. A free EP was just the quickest, easiest way to get the music into the world.

Fortunately, Hello Lonely, Hold the Nation found an audience, and Downliners Sekt decided to turn its efforts into a trilogy of EPs, following up with We Make the Hits, Not the Public later that year and concluding the series with 2011’s Meet the Decline. Each record stretched the group’s aesthetic sensibilities a bit further, with the former incorporating more touches of head-nod worthy rhythm and the latter sounding increasingly UK-inspired—albeit at a considerably off-kilter angle—thanks to the skipping patterns and nonsensically melodic vocal chops strewn throughout. Taken together, the trilogy—which also saw a full vinyl release from Barcelona’s Disboot imprint following the succes of Hello Lonely, Hold the Nation—forms a wide picture of Downliners Sekt’s production scope, one that’s not quite experimental in its aims, but also refuses to be confined to any particular genre. Pinning the group down to a particular sound can prove difficult, even to its members, who explain, “For us, we’re not making electronic music, we’re more musicians that like many styles of music and the electronics [is what] allows us to put them together.”

Late last month, the pair dropped “Trim” b/w “Tab,” a two-track single which marked its debut for Infiné. Without a doubt, there is an evolution to be heard between the trilogy of EPs and this new effort. The grooves are more locked and steady, and though they’re still made from the clatter of innumerable moving parts, they’re somehow easier to follow. Furthermore, the outfit’s pastiche of distant keys, fading pads, and melodically rearranged vocals moves with a stronger sense of cohesion. Still, while the echoes of Burial, Mount Kimbie, and other similarly accomplished purveyors of UK mood are no doubt present, there is an extra emphasis put on the texture and sonic weight of these productions. To its creators, the sound of these tracks is “just as important as the music,” and the emphasis on low-end content is entirely by design, with the duo emphasizing that the bass and sub-bass are integral parts of its work, making it not so much fit for earbuds. This, it turns out, plays into one of the pair’s goals for the future: to play bigger festivals and clubs that really allow for its sound to fill out a space. The desire harkens back to a gig at the Rex Club in Paris (traditionally a more four-on-the-floor-friendly establishment) that first assured Downliners Sekt that its peculiar—by dancefloor standards—beats could move a crowd. “We did a set that had a lot of really strange beats and strange grooves, but because the sound was huge and the bass was there, people reacted amazingly. That was kind of a revelation.”

“Maybe consciously or unconsciously, we’ve always been afraid of being part of a scene; we’ve wanted to be free from any particular style,” says half of the quasi-anonymous outfit as he gets a bit sidetracked from suggesting what direction the forthcoming LP for Infiné might lead towards. He adds, “Music, for us, is too important to just be tagged so easily.” About five months into crafting its 2013-slated full-length, the members of Downliners Sekt say they’ve just about reached the core of the record-making process, something they have never been able to rush previously. This is perhaps because, as they put it, together they work “the old-school way,” laboring over and devotedly taking care of each particular sound. “We’re really conscious of everything,” adds the other member later on in the conversation. “We really pay attention to every aspect.” Even with this dedication, the pair seems confident enough to identify the spring of 2013 as the timetable to expect its not-actually-but-still-feels-like-a-debut LP. If all goes according to plan, it will be the last time that anything from Downliners Sekt will be viewed—even mistakenly—through that sort of lens.