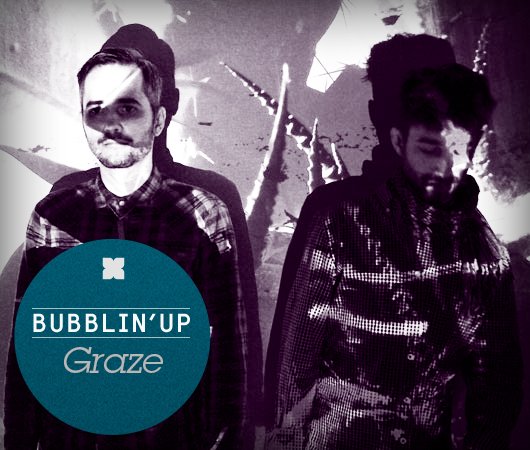 Adam Marshall and Christian “XI” Andersen have long been two of Toronto’s premier dance-music exponents, albeit in fairly different realms. When he’s not overseeing operations at the top-notch New Kanada label, Marshall releases stripped-down, drone-heavy techno, while Anderson trades in frenetic, sub-led garage. Having met each other only briefly in their hometown, it actually took a move to Berlin for them become friends. But even while in Berlin, the two tended to work on their collaborative Graze project remotely, jamming out ideas in their own spaces and only convening to mix them down (a practice which continues, as Andersen has since returned to Toronto). What’s more, Graze’s tracks were composed to fit seamlessly within a live set, which they will obviously have to perform together. It would seem that Marshall and Andersen have made every effort to ensure the diffusion of their collaborative efforts.

And yet, Graze presents a decidedly coherent vision, melding each artists’ distinct style without compromising their particular quirks. The duo’s self-titled EP (out now via New Kanada) hints at Berghain techno’s efficient throb, but is also frisky, offering enough shuffle to satisfy followers of more UK-centric styles. It’s laced with insistent stabs and a sense of forward motion, but also has a dreamy, melodic lining. “We are both very complementary producers in a lot of ways,” Andersen explains. “Some of the things Adam’s most proficient at, and that are common in his work, are not necessarily so evident in mine. It felt like there was just a kind of unspoken understanding. We’re both fans of each other’s work, and we both have been aware of each other for quite some time. Identifying your counterpart’s strengths in this scenario is not very difficult. You know what the other guy is good at, and you know what you bring to the table.”

Synthesizing UK-style bass music with more straightforward house and techno has been a major narrative over the last few years, and has lately culminated in some limp crossovers, perhaps because of the lack of knowledge some producers have about one style or the other. In Graze’s case, Andersen’s and Marshall’s respective histories help to amend this. “It was refreshing, coming from two different backgrounds,” Marshall says. “I think that made the work a lot easier. It was nice to work with someone who wasn’t coming from exactly the same perspective as I was.” Andersen agrees, flatly stating, “I’m not really much of a house and techno dude.” As a result, he says, “working on kind of a techno record, with somebody who does work on a lot of house and techno, gave me a lot of additional perspective to the whole production process of making something like that, as opposed to just doing my normal thing.”

While each producer’s unique differences keep the record balanced, it’s easy to wonder about the effect of developing tracks in isolation. It doesn’t seem improbable that the bulk of Graze’s record was remotely pieced together, as it generally feels built for a certain purpose—even a bit tracky. As Andersen attests, “Ultimately, the project is a club project, and I think the majority of the stuff we make is going to be in that vein.” In spite of this, the artists linger on their record’s closing track, “On Board.” Sparsely pocked with beats, it offers a sumptuous, widescreen meditation that hints at a trajectory beyond club tools. “I think both Christian and I are, secretly, probably happiest with that song,” Marshall says, and Andersen agrees. Interestingly, the piece’s turning point came when the two were together. “That track originally had this crazy drum pattern that I had made on top of all that atmosphere, and it was going all nuts,” Andersen remembers. “That primary synthline, that really Boards of Canada-y synthline that basically is now the main feature of that track, wasn’t there. I went over to Adam’s one day, and we were listening through to what he had done to some of the tracks, and he had incorporated that over top of it. And then we just turned the drums off, and let that run. We just decided mutually that we should remove my aspect of that track—the rhythm aspect—completely.”

For the time being, Marshall and Andersen will continue to work separately. Living on different continents makes this a virtual necessity. Andersen maintains, “Working on stuff in isolation, aside from the fact that it’s just kind of the way we’ve [always] done it, also opens you up to a lot more freedom.” He goes on to add that he could see working in isolation as the way Graze will probably continue to work on music, even if they ended up in the same city again. Still, the pair is designing a live set to give the project an improvisational element. “The jamming aspect is really important for developing stuff, and I think that will come through in the live performances,” Marshall says. The two will debut their live show at this year’s MUTEK festival, before taking it on tour throughout the summer and fall.

Both producers see Graze as a way to potentially open up new horizons for their respective solo careers. “I get bored really easily of doing the same thing too much, so any opportunity I have to expand, or grow, or [gain] a new approach to [music] is definitely something I value greatly,” Andersen says, adding that this new project is “a lot more serious and directed” than his past collaborations. Fittingly, the two have much of Graze’s 2013 schedule planned out in advance. They’re planning to follow Graze with a 12″ of leftover material from the sessions that birthed that record, and in the fall, Marshall and Andersen will release a proper follow-up record, which both seem to be very satisfied with. Andersen describes it as “Graze 2.0.” He recounts playing the new tracks for a friend, who commented, “It’s really nice that you guys have already developed a sonic landscape. All these tracks sound like they’re made by the same group.” For an intercontinental duo that only just released its first EP, such a totalizing synchronicity is something to be proud of.