“Did you hear what he said? He asked what the music scene is like [in […] 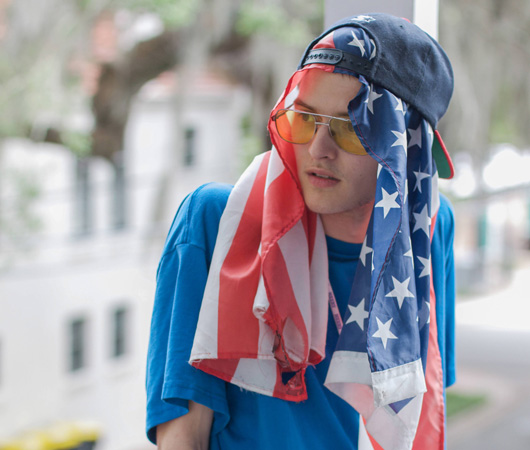 “Did you hear what he said? He asked what the music scene is like [in […]

“Did you hear what he said? He asked what the music scene is like [in Savannah].” Helix (a.k.a. Beau Thigpen) is already chuckling, but once he throws out the question to his friends—several of whom are lurking in the background and periodically chiming in—the laughter becomes uproarious. Still struggling to compose himself, he eventually boils it down to a simple observation: “There’s no scene at all here.” Granted, this isn’t too surprising, as Eastern Georgia isn’t exactly known as a hotbed of musical innovation. Nonetheless, it is the city which the 20-year-old producer—who also happens to be the latest addition to the Night Slugs roster—calls home.

Helix actually grew up a few hours to the south in rural Waycross, Georgia. Listening to a steady diet of ’60s and ’70s rock (courtesy of his parents), his initial contact with electronic music came via videogames, which sparked an early love of trance. Or, at least, what he calls trance. “[Videogames] are saturated with trance,” he says. “That’s what I heard.” Born and bred in the South, hip-hop also played a major role in his musical coming of age. “My whole life, rap was involved.” He continues, “As soon as Southern rap was a thing, it was in my life.” It’s a love affair that continues to this day and undoubtedly influences his production, as Helix points out, “Southern rap is all about polyrhythms, like how many crazy hi-hat rhythms you can have going. The bass is the only slow percussion, everything else is ridiculously fast.” Oddly enough, it was hip-hop that also brought him into contact with the urban sounds of the UK, as the chance discovery of a few Dizzee Rascal tunes as a teenager eventually blossomed into a full-blown obsession with grime, which in turn led to Rinse FM, dubstep, and the entire spectrum of so-called “bass music.”

In 2009, Helix took his tastes to Savannah, enrolling in the city’s famed art school. However, he quickly grew dissatisfied with the experience, dropping out after only two quarters. As he explains, “It was expensive and I wasn’t really getting what I wanted.” Nevertheless, he elected to stay in the city, and focused on another activity he had taken up around the same time: music production. While he describes his initial creations as “really crappy,” Helix pressed on and continued to turn out tracks combining elements of techno, dubstep, and what he calls “bassy stuff.” Eventually, people began to take notice, most notably Girl Unit, who checked out Helix’s music after the young producer randomly tweeted at him. “[Girl Unit] said, ‘Hey, I listened to your tracks and they’re really cool,’ and this is when I really sucked,” recounts Helix with a laugh. Apparently the Night Slugs camp didn’t agree, as label co-founder Bok Bok eventually got in touch about signing “Drum Track.” After floating around for months as a much-anticipated dub, the tune finally came out last month as part of the imprint’s ongoing white-label series. It’s not his debut effort—back in 2010 he released a techno-leaning DJ tool called “Pavement” via Belgian label Other Heights—but it’s unquestionably boosted his profile in a hurry.

With the release of “Drum Track,” things have started moving very quickly for Helix. Another single, “Stacks Riddim,” is due out soon on the All Caps label. He’s also begun playing live, a daunting proposition given that Helix has never really DJed and, quite honestly, hasn’t spent all that much time in clubs. It’s a function of both his age and geography, but it definitely gives him a unique perspective when it comes to making tracks for the dancefloor. He elaborates, “I make stuff where I don’t know if it would work in a club setting, but I want it to work in a club setting.” Of course, as an artist with only a vague idea of what a club setting actually entails, he’s sort of creating tracks for a fantasy environment, one he describes as having “a big system and no douchebags.” As he plays more gigs—his first European tour is slated for May and June—he may be disappointed to find that these sorts of clubs are harder to come by than one might think, but Helix doesn’t seem particularly worried. “It’s stuff I already really like doing,” he says. “So I don’t really feel pressured.”

Where many producers get bogged down in self-doubt and musical minutiae, Helix appears relatively carefree in that regard, instead focusing a lot more time on goofing around and yes, messing with people. Online, he’s got personality to spare, taking what some might call an antagonistic approach to social media. “I’m just flooding Twitter with whatever stupid things fall into my head all day,” he says while laughing nervously. He does assert that, “I’m not nearly that crazy in real life,” but there’s an unmistakable sort of devil-may-care brashness to his personality. One minute, he’s saying something like, “Only Basic Channel and Jeff Mills are good. Everything else sucks,” before quickly turning around and stating, literally seconds later, “All I listen to these days is rap.” It may not be entirely consistent, but consistency doesn’t appear to be a primary concern for the young artist. Even as the name Helix continues to grow, he admits to producing tunes under three or four different pseudonyms. He declines to elaborate much further, but one is based on sampling funk and soul tunes and he claims that several of these alternate identities have releases on the way. At this point, simply making music is what drives him. When asked about future plans, he cites a possible future move to Atlanta, but ultimately doesn’t seem to care much about where he lives, so long as he can “put out a bunch of records and play a bunch of clubs.” Unsurprisingly though, he wraps things up on a flippant note, deadpanning, “I definitely want a kitten at some point.”