When asked about his biggest influences, Nico Jacobsen (a.k.a. Hound Scales) is just as likely […] 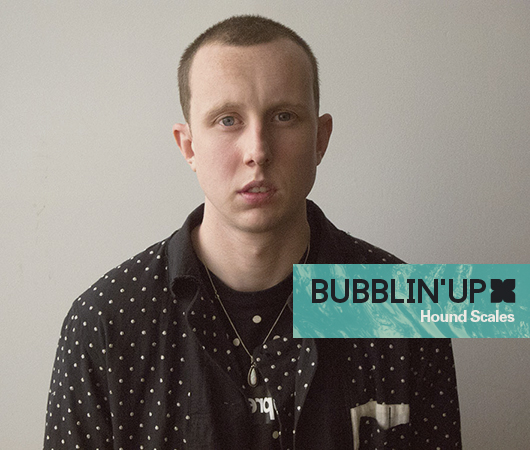 When asked about his biggest influences, Nico Jacobsen (a.k.a. Hound Scales) is just as likely […]

When asked about his biggest influences, Nico Jacobsen (a.k.a. Hound Scales) is just as likely to reply with the names of artists and filmmakers than those of his fellow techno producers. “I’ve always tried to look to film and art more than just music for inspiration, so you have less chance of sounding like other people,” he explains. One half of the duo behind the burgeoning Fifth Wall label, the Brooklyn-based Jacobsen debuted the Hound Scales moniker in February of last year with the Case (Nabis) EP, and the music he’s been offering up since then has a noticeably cinematic feel. “I went through a period for like two years where I literally did nothing but just watch every depressing, fucked up movie I could get my hands on,” he says. “It was when I came out of that hole that I started making music.”

Born and raised in San Francisco, Jacobsen frequently felt alienated by the lack of options offered by the city outside of standard house and techno fare. Instead, his first exposure to electronic music was through grime and UK garage—he cites artists such as Ruff Sqwad, Darqwan, and El-B as early influences—before he discovered techno through Sandwell District. “I played a Darqwan track into “Hunting Lodge” by Sandwell District and everyone in San Francisco just hated it, and I was just like, ‘Oh man, maybe I want to make this kind of music instead.'”

A self-described “natural contrarian,” Jacobsen seems to have found a kindred spirit in his friend Reilly, with whom he moved to New York to found the Fifth Wall label near the end of 2012. This contrarian impulse makes its way into the label’s ethos, which has steadily cultivated a rough-hewn, warehouse-ready aesthetic that is certainly attuned to the current zeitgeist, but maintains a position that is decidedly separate from it. The pair started the label right around the time that underground house and techno, and the L.I.E.S. and White Material labels in particular, were taking off in New York. As Jacobsen says, “We thought it would be more interesting if we tapped all these young UK dudes,” and the initial Fifth Wall releases included records from artists such as Clouds, Myler, and Unklone.

Nevertheless, Jacobsen admits that the label’s outsider approach has lessened as it has become more integrated into the lively underground dance music scene of its Brooklyn base. “Unfortunately,” as Jacobsen puts it, “we started making friends with people here, and that kind of just naturally worked its way into Fifth Wall a bit aesthetically—being at Bossa Nova Civic Club every fucking night, you hear this shit and it can’t not seep into your pores eventually.” He continues, “The amount of talented people in New York is pretty unbelievable at the moment and it’s really incredible to go to a place like Bossa Nova and your whole night will just be conversations about how people’s records are going and what kind of new things they’re trying.” He has an endless amount of praise for the owner of Bossa Nova Civic Club, John Barclay, for providing a space that could serve as a catalyst for the building momentum around this music in New York City. “Whenever I’m there, I’m always telling people, when people look back at this time, this is going to be the spot that nerds in 15 years are going to be like, ‘Oh, I wish I went to this show at Bossa Nova.'”

Still, as much as Jacobsen may (reluctantly) enjoy interacting with—and being influenced by—his peers, he also can’t entirely escape his early influences. The UK’s hardcore continuum is based in a sonic framework that’s not exactly prevalent in the underground house and techno scene that’s coalesced in Brooklyn, but that framework continues to shape Jacobsen’s work. “Swing is something I’m always going to have in my music from UK garage and grime and shit,” he says. “I love swing and what it does to people’s bodies when they dance to it, rather than just smashing their head back and forth for a few hours.”

Following his move to New York, there’s no question that Jacobsen’s production chops—and the quality of his output—has grown by leaps and bounds, yet the producer has an endearing sense of modesty that sometimes edges into self-doubt. His last release, the Sabbath Lillie Hawks EP, has a melodic, decidedly house-flavored sensibility that is at odds with the abrasive, almost belligerent techno of his previous EP, Femin. Jacobsen doesn’t put this down to a stylistic evolution so much as making “a strong effort to not make the same record twice.” As he notes, “I never played Femin, it was like impossible to DJ. I really wanted to make some tunes that people would actually want to play out but was still Hound Scales applicable.”

Not one to stick to a formula, the producer’s latest EP, Pinky Violence, which is being released this week via Fifth Wall, is filled with what he calls “weird exercises and genre smashing.” “I actually tried hard to see if I could make something stiffer, like more traditional techno,” he adds. But while the EP’s lead track sticks to a fairly conventional four-to-the-floor template, the rest of the record is decidedly un-dancefloor friendly, something Jacobsen openly puts down to feeling a bit burnt out when it comes to dance music. “I’ve been listening to mostly grime and rap and industrial again,” he explains.

As a producer also running a label, it can be difficult to detach one’s identity as a producer from the identity of the imprint. Still, despite most Hound Scales releases to date coming out via Fifth Wall, Jacobsen has a couple of forthcoming records on undisclosed labels; “One is probably my favorite New York techno label,” says Jacobsen, “and the other is one of my absolute favorite, damn near legendary UK house and techno labels.” He suggests that working with other labels is a good way to keep the production process fresh by providing outside constraints and because “they tell you when something’s terrible. Reilly will tell me if something is really bad, but you’re still a little biased because you don’t want to hurt your homie’s feelings.”

Despite those friendly limitations, it’s clear that Jacobsen enjoys running Fifth Wall with Reilly; moreover, the label provides him with a much needed outlet for his other aesthetic impulses. Jacobsen’s interests have always been well-rounded—he actually didn’t start making music until a few years ago because he felt he was too busy with other hobbies—and these days, he designs the artwork for all Fifth Wall releases, which he describes as inspired by equal parts old industrial and EBM record sleeves and recent exhibitions by contemporary artists Rosemarie Trockel and Dieter Roth. Jacobsen says he’s most inspired by artists and filmmakers who have a “stern and confrontational approach to art while also trying to maintain a sense of humor.” It’s not too hard to see this combination in Hound Scales’ music either, which is refreshingly lacking in self-seriousness, despite its aggressively confrontational air.