Night Slugs’ newest cook boils up a sweet mix of grime and house elements. You […] 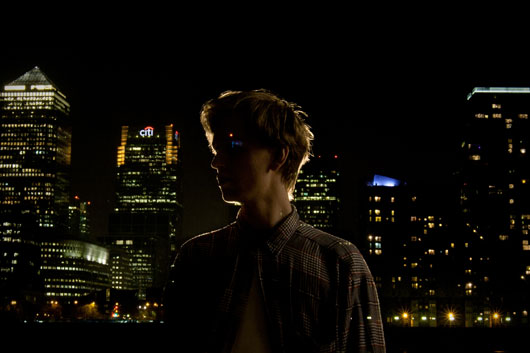 Night Slugs’ newest cook boils up a sweet mix of grime and house elements. You […]

You might say London producer Jack Latham—at least musically speaking—is an old soul. The 20-year-old’s instrumental tracks made under the alias Jam City co-opt the snarling low-end of grime while implementing textural overtones gleaned from a studious appreciation of old house music. “I was too young and too isolated to get into any places where these sounds were being played,” Latham says of his formative years in the dance music scene. “Because I didn’t have a club environment to absorb these sounds, I think I had to create my own narrative around them… Instrumental grime became a way to re-imagine my surroundings.”

In fact, Latham came to making beats, as many producers do, from rough-and-tumble London hardcore punk scene. “There’s definitely energy, awkward angles, and sharp edges that I was later to find in grime,” he says. That hardcore ethos hardly remains, though; instead, Jam City’s push-pull productions suggest that he’s a pretty peaceful and erudite guy. The machinations of “Magic Drops,” from his debut Night Slugs EP of the same name, come off like the diagetic rumblings of a spaceship, but layered behind the battle-station sirens and factory engines is a fluttering set of ethereal synth chords that signal a fantasy for the viewers at home. “I like tracks that when they drop, it feels like the floor has given way beneath your feet,” he says before adding, “I always want to try and add vortexes in my music and in my DJ sets. They’re just as important as a big, fat Dutch-house drop.”

Another recent fascination of Latham’s is South African house. “I loved how minimal and dark some of it is,” he says. “It took me a while to figure out how to DJ with it. They’re like rhythm tracks sometimes, and I really like that.”

Fittingly, Latham was snatched up by Bok Bok and L-Vis 1990’s Night Slugs label (featured here), which will release Jam City’s next EP imminently, and in the fall will roll out his debut full-length.

It’s hard to imagine that Latham’s still too young to down a pint in the States, but he maintains the poise to wax philosophical about his competing muses. “What people forget about grime is that it was originally made for the clubs,” he informs. “But, at its peak, nothing was sonically out of bounds with grime, which I think is why it’s such a constant reference point to me. It’s good to just try and keep that approach.”

The Magic Drops EP is out now on Night Slugs.