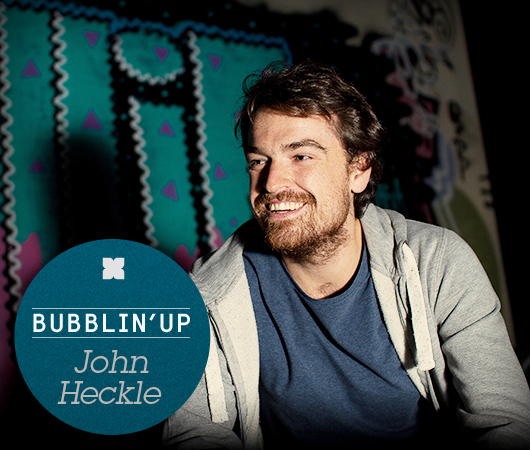 The easiest way to pigeonhole John Heckle is to talk about how “raw” his productions are, but the term means less and less in the context of house and techno with every passing day. In 2013, releasing hardware-only live jams is hugely trendy, and the “raw” or “rough” descriptor is applied to virtually anything that isn’t dazzlingly polished. Barring his early work as Hek, the young producer from Liverpool has always tended toward the overdriven, but it seems a little reductive to place him in this context. Naturally, his relationship to hardware and, more importantly, somewhat reckless EQing, comes up repeatedly in conversation.

“I still don’t really know the ins and outs of sound mixing, or how to actually make a record sound clean,” he insists. “I guess that raw is the only way I know how to make tracks at the moment, with the gear I’ve got. I’ve only got a little Mackie effects mixer, with eight channels, and what I usually do is record into the line-in, onto the computer to capture the audio. When I first started using hardware, I noticed that when I recorded a track with all the gains down, it sounded pretty shit—glued together, almost. Pushing the gains made the sound tighter, and whether or not that’s beneficial to the actual sound of the track in the end is anyone’s guess. It can be quite overdriven, but that’s the aesthetic of the music anyway.”

Heckle peppers his talk with references to his gear. His past releases on labels like Mathematics, Tabernacle, and Crème Organization have all come with a visceral bluntness, and beyond their sometimes scratchy, distorted sound quality is an insistence that the instruments do the talking. Heckle obviously uses his share of effects, but he is keen to keep his compositions undisguised. This carries over to his newest work as well, including the Desolate Figures LP for Tabernacle—which dropped this week—and the forthcoming Baiyun Mountain EP for respected Dutch imprint M>O>S. However, not everything has remained the same; conspicuously absent from stretches of both releases is the producer’s Juno-6 synthesizer, which strongly marked his early work. The machine’s telltale sounds lent Heckle’s tracks a typically Chicagoan tinge, and no doubt helped endear him to Jamal Moss (a.k.a. Hieroglyphic Being), head of Mathematics and one of his heroes. “I actually sold my Juno-6. I think it must have been halfway through recording [the album], so that’s probably why it doesn’t pop up on all the tracks,” he says. “But I’ve got a reasonable selection of stuff: a few Kawai synths, a few Korg bits. With each different track, there must be a different combination of machines, for a bit of variety.” With disparate approaches to jamming out tracks, Desolate Figures can feel like a compilation at times, but Heckle attributes its reasonable coherence to the work of the label, and the fact that he made “90 percent of it over a fortnight.”

The tracks, meanwhile, owe some of their interior balance to the producer’s Juno-G Workstation keyboard, which has been a mainstay for him from the beginning. “It has a 16-channel MIDI sequencer actually on the keyboard, so you can run 16 different machines off this one keyboard and basically build a track inside the keyboard itself. The sounds on the Juno-G aren’t the best—there are some good sounds on there, but for the most part they can sound quite thin. But being able to run the MIDI sequences out of it, and then into some more beefy synths and keyboards, that’s pretty much all [the album] was. I don’t have a sampler or an MPC or anything like that, and I don’t use a computer to make the tracks, so it’s just still all on the same system.”

Perhaps owing to this, neither new record signals a major departure. “I’ve only been making records seriously for the last three or four years, so it’s hard to see how I’ve changed,” Heckle says. “There are still some elements from the first record for Mathematics (2010’s Life on Titan) that I try and keep, but there are a couple of tracks on the album that are more full-on techno—the first full-on techno records I’ve been able to make. Through having gigs, I’ve been able to bulk up my studio a bit, so I can make different styles of music that I wasn’t able to make originally.”

Although Heckle’s music probably lands closest to the experimental “jakbeat” of Rust Belt producers D’Marc Cantu, Traxx, and JTC, it’s this relationship with traditional, “full-on” techno that gave him his start. The producer’s lone 12″ as Hek, 2006’s “Poppadom Preach,” was forwarded to the RSB label via UK techno luminary Regis, their meeting a result of Heckle’s DJing in Liverpool. “I started DJing in clubs when I was 15,” he remembers. “My brother used to throw techno nights in Liverpool and I used to love Birmingham techno—I still do—and [I also played] a lot of European stuff, [plus] a lot of Mills and Hood. It was pretty four-to-the-floor, banging techno through all my sets, up until I was probably about 19.” The artist has developed interests in other areas now, but he still takes influence from this “all guns blazing” approach, as he describes it, in his current DJ sets. “I don’t play full-on techno sets anymore, [but] I try to keep the same kind of energy, while still playing house, Italo, or industrial records. I try to mix pretty quickly, and throw a drum machine over when I can. I don’t set a record on for six or seven minutes. I guess there are records that suit being left on for that long, but I try to cut it up as much as possible.” The drum machine he speaks of is an integral part of these performances, an idea inspired by Jeff Mills. His choice in machinery has also shifted along with the makeup of his sets. “I used to use the Novation DrumStation and the 505, but [both have broken],” he says. “I do use the 707, which is a really straightforward drum machine to use in DJ sets. It’s literally just a box with 16 noises, and the volumes—there’s no molding the sounds at all, so as long as you’ve got the tempo right, it’s easy just to throw drums over the top. It makes a nice little addition to DJ sets.”

Heckle also tours a live set, and he is palpably enthusiastic about it. “Again, it’s with the Juno G keyboard,” he begins. “I’ll have that on stage with a 707, and recently one of the Acidlab Miami drum machines—I don’t know if you’ve heard of them, but they’re like an 808 clone, made in Germany, and they’re absolutely brilliant. I’m pretty sure they’ve got a bit more range than the original 808, so if you mess around with the decay, it goes further back than the original drum machine did. And then a few other pieces, like little desktop synths, rack synths, and effects units. I take anything that can fit inside my suitcase, cuz otherwise I’d be taking about five keyboard cases away with me, and that’s not really doable.” He might perform with smaller machines onstage, but he’s been able to work around not having his home studio with him: “for some of the sounds, say off the Juno-106, I can use a Waldorf Blofeld desktop synth that makes similar sorts of pulse-based sounds for basslines. When you turn it up really loud, no one can tell the difference, and it does the same job.”

By all accounts, Heckle’s live show is as punishing and intense as his DJ set, but the producer’s records are often cut with beguilingly beautiful ambient pieces, like his tribute to Aphex Twin’s Selected Ambient Works on 2012 EP Voices and Visions, or the floating, Eno-esque “So Far” on the aforementioned Life on Titan. He is, of course, casual about how he comes up with them. “I’ve found it normally easier to start and finish them within an hour or two, because it’s just a case of getting the notes right, getting the effects right, and setting a mood for the piece,” he attests. “But with making a techno record, there’s a lot more structuring that goes into it, and you have to sort of build tracks around a melody rather than just having a melody as the centerpiece of a record.” Fans of those tracks will have to wait to wait to hear more, though, or maybe commission it themselves. “I’ve only ever really made it when someone’s asked for it, beyond maybe ‘Ode to SAW,’ which I just did off my own,” he says. “The rest [came from] suggestions. If I had my choice at the moment, I’d always be making stuff with beats. I’m just not as passionate about [ambient] as I am with the other music that I try and make. I guess there’ll be a stage in the future where it might be something that I think about, but for the moment, it’s just the odd one, I reckon.”

Expect Heckle to move deeper into techno territory. Phantom Planet Outlaws, his project with fellow Liverpool residents Mark Forshaw and Binny, is set to release a new EP on Dublin label Apartment Records. The three know each other from being fans of Jeff Mills and Underground Resistance, and these are their primary influences as well; it’s “full-on techno,” Heckle says. The producer can get downright Millsian in his track titles as well: “If One Second Were a Million Years,” “Birds with Vertigo,” “Life on Titan.” These come from a notebook where he simply writes down phrases he likes. “I’d never say no to try some sort of concept project, but it’s never been something I’ve been in the position to do, and it hasn’t been necessary yet either,” Heckle says. “I am just making whatever I feel like on the day. That’s all they are really—just jams, and for the foreseeable future, they’ll probably continue to be that.” His approach may not be high-concept, but his tracks routinely manage to sound accomplished anyway.