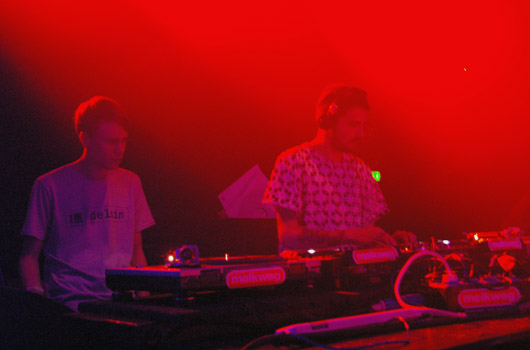 There is an abundance of paths that can lead two people to collaborate creatively—sometimes it’s by a chance meeting, sometimes it stems from a gradual sharing of ideas, and, in some cases, it can even be part of a calculated plan. With Karenn, the collective endeavor of Londoners Pariah (a.k.a. Arthur Cayzer, pictured left) and Blawan (a.k.a. Jamie Roberts, pictured right), the drive to collaborate is equal parts a genuine admiration for each other’s work and a joint desire to reach into much deeper sonic territory.

Despite casually discussing working on a project together for years, Karenn was officially born when both producers were separately tapped to contribute remixes to West Norwood Cassette Library‘s “Get Lifted” 12″ earlier this year. The two saw it as an opportunity to give their collaborative inklings a test run, and the resulting remix is one of the deepest, most stirring tracks either have penned to date. The rework is truly a joint undertaking, insofar that you can hear pieces of each producer’s style in the track. The drawn-out, somber soundscapes and looping organ blips would certainly not be out of place on Pariah’s Safehouses EP, and the thick, rolling drums share the same almost-evil sound as the otherworldly percussion which marked Blawan’s debut single for Hessle, his subsequent releases on R&S, and even the white-label sensation “Getting Me Down.” But the “Get Lifted” remix was just an experiment, a starting point for the two, who actually have much loftier goals than simply finding the points at which their separate sounds meet.

Honestly, a simple combination of Pariah’s R&B-infused UK post-whatever productions and Blawan’s heavy-handed rollers doesn’t sound like a bad idea at all. In fact, it would almost make too much sense, as one can’t help but see the many parallels in each artist’s recent rise to notoriety, with both Pariah and Blawan emerging from splinters of the prolific UK bass scene and being tapped by the unparalleled R&S imprint early on. But that is decidedly not what the purpose of Karenn is, as Cayzer explains, “We’re not trying to make this project sound like a collaboration. It’s supposed to be something different, that’s why there’s a different name for it.” This different sound has yet to be heard in full, with nothing more than two radio rips of Karenn tracks appearing on YouTube in recent months. One of those tunes, “Chaste Down” (formerly referred to as “Untitled”), has been announced as the a-side to pair’s forthcoming debut EP. Like “Chaste Down,” the other two tracks which comprise the EP are said to be DJ/club-oriented, revolving around the 120 BPM range and described by the pair as “heavy,” “tracky,” and even “industrial sounding.” Notes Cayzer, “We’ve both ended up pretty much just playing house and techno in our sets, and I think the focus here is more four-to-the-floor music.”

“Chaste Down” came early in the collaborative effort and set the tone for the rest of their output. “Once we made that,” says Roberts, “the box had been ticked, we knew where we wanted to take it.” Listening to the track, with its larger-than-life set of drums, array of machine-born textural effects, and deep, unrelenting groove, it is clear Karenn’s focus is on the dancefloor—albeit an alien one. The forthcoming EP is set to be a vinyl-only release, a hand-stamped 12″ that will not only mark the debut of original Karenn material but also serve as the inaugural release for Pariah and Blawan’s newly minted imprint, Works the Long Nights. When asked about the choice to do an exclusively vinyl release, Roberts responds, “That’s what the purpose of the tracks are, [to play out]. They’re not something you’d buy on MP3 and put on your iPod.” And he’s right, as a listen to the EP on earbuds or even decent headphones would not do the gargantuan sonics of the duo’s productions proper justice.

Despite the high levels of anticipation that surround the debut Karenn EP, both Pariah and Blawan are quick to say that this release does not define their collaboration, but is instead an early chapter in an ongoing partnership that has plans to release a series of 12″s over the next few months, including a second EP that’s already coming together and is described by the pair as, “a bit faster, more kind of old-school techno” à la ’90s New York. For now, Karenn is less a conceptual project and more a mutual exploration of deep, dark sounds, with an eye always fixed on the club. “We don’t worry about if it’s sounding too much like ourselves,” says Roberts. “If we come up with a good track together and it feels right, we do it. It’s more about us just writing tracks together.” Considering the incredible breadth of talent already displayed by both producers in their still-young careers, it would be unwise to ask them to do any different.