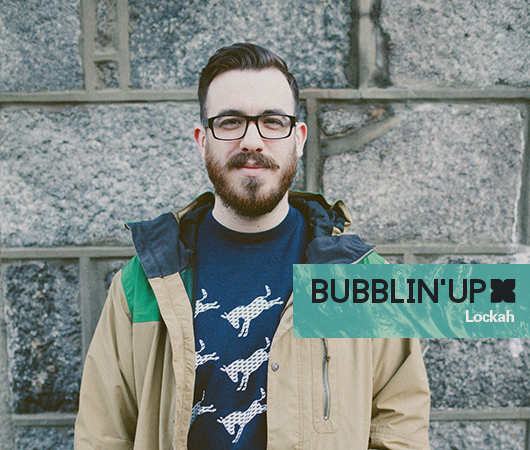 When we get ahold of Tom Banks (a.k.a. Lockah) via Skype, he’s in the final stages of packing up his flat and moving away from Aberdeen, Scotland, the city he’s called home for the past 28 years. He’s headed for Brighton, England, to be close to his label Donky Pitch, and to have easier access to a larger scene. “I’ve been gradually getting money from gigs that’s almost acceptable,” says Banks, who recently quit an IT job he dreaded showing up to. Fortunately for him, it’s looking less and less likely that he’ll have to return to an office. After successful releases over the past few years on labels like Mad Decent’s Jeffrees imprint, Mishka, and the aforementioned Donky Pitch, he’s about to release a new 12″, “If Loving You Is Wrong, I Don’t Want to Be Wrong,” which will quickly be followed by his first full-length, a Miami bass-, electro-, and rave-inspired LP called Yahoo or the Highway that’s set to drop in April.

As good as things look now, Banks didn’t just stumble onto sudden success. In fact, his origins as an aspiring producer go back to when he was just eight or nine years old. “I had a gramophone from a dead grandparent with shellac discs, the ones that actually shatter,” he remembers. “I actually used to scratch on those things as well. It was horribly misguided.” Aside from his early attempts at spinning records, Banks tried his hand at playing other instruments. “I also used to have a drum kit and a Casio keyboard and this Fisher-Price tape recorder. I would record things on that. I know lots of people are going back to this lo-fi aesthetic now—I might have to reinvest in this classic gear,” he jokes, while shooting over a photo of the model he owned.

Banks’ early fascination with vinyl soon lead to an interest in dance music. “I bought some jungle records when I was not much older—probably still in primary school. Some acid and techno stuff, which was probably falling out of fashion at that point,” he says. In high school, went on to play in rock bands, mostly due to fact that no one else seemed to share his interest in hip-hop or electronic music. “I didn’t really exist in an environment where people were into that sort of thing,” he says.

At 17, Banks moved out of his parents’ house and began producing music in earnest. “All of a sudden, I didn’t have space to make music. People complained when you made loud noises in a flat, so maybe out of necessity, maybe out of curiosity, I got back into learning how to DJ,” he says. His first purchase was a pair of turntables. “In 2005, I certainly didn’t know anyone using Serato at that time. I just wanted to buy any vinyl I could find from charity shops and car boot sales. I bought anything that I could try and sample: old soul and funk records, even cheesy lounge tracks and instrumentals.” Banks also sought out online forums and shops like Turntable Lab to educate himself. “They were big on editorials. They had a lot of deadstock and would kind of explain why it was a good record, or why it was useful. It was really cool learning how to keep things in context, even if they weren’t from the same time or the same style of music.”

It wasn’t until early 2010 that Banks adopted the name Lockah, an alias he picked almost arbitrarily. (“It sounds like a lot of other artists that were big at the time,” he says with a laugh.) Around the same time, Banks also co-founded Tuff Wax, a label that he runs with fellow Aberdeen producers Bones & Money. “We had our own club night in 2009. At that point, there was this complete mix of all sorts of rap beats, grime, dubstep, and UK funky. If you could shoehorn in something that wasn’t really from that scene, but you could make it work, that was very cool to me.” His first physical release as Lockah was a 7″ titled Aberdeen Truth Vol?.?1, which he isn’t particularly happy to revisit. “It sounded really bad,” he laughs. “These were not good productions, even when they were coming out. The aim was just to have something tangible.”

Even though Banks is hard on himself when it comes to his early output, his first releases did help raise his profile outside of the cloistered Aberdeen scene. “I had done a quite questionable remix of ”Let Me Love You Down” by Inoj and this guy messaged me on Twitter asking me to send it to him. Originally, I thought it was spam,” he recalls. As it turns out, the note came from Clayton Blaha, an employee at the PR firm Biz3, and Banks’ future manager. Blaha connected Banks to Jeffrees, where he released the When U Stop Feeling Like a Weirdo & Become a Threat EP, and, soon after, another EP titled Please Lockah, Don’t Hurt ‘Em—this time with Mishka. “At that stage, I was really trying to sharpen my production skills,” he explains. “Ultimately, I think those releases are a bit over the top, a bit hard, a bit of-the-moment. People were calling the Jeffrees thing a trap release! At the time I made it, nobody was calling any of that stuff stuff trap.”

The first release that Banks seems particularly pleased with in retrospect is Only Built 4 Neon Nites, which was released early last year via Donky Pitch. Described by Banks as “conceptual driving music,” the EP is a vivid collection of atmospheric synth-pop; it was also more subtle and less club-oriented than his previous work. (Banks is a huge hip-hop head and the title is an homage to Raekwon’s Only Built 4 Cuban Linx…, his favorite rap record.) “I did a lot driving when I was younger, so music and driving were very hand-in-hand with me,” he says. “It was like a mini concept, I guess. In my mind, it was quite deep for a four-track synth-pop release.” Banks followed the EP with a collaboration called Higher Learning with Taste Tester, a release he’s less fond of. “It was much less deep. It was overshadowed by Neon Nights in my mind,” he says.

Lockah’s upcoming album, Yahoo or the Highway, plays with some of the same ideas as Only Built 4 Neon Nights, but also expands the nostalgic palette that Banks has now made his signature. It’s also his first release that clearly incorporates his love of Miami bass, which is evident on the excellent, rave-oriented new track “If Loving U Is Wrong, I Don’t Want to Be Wrong,” two versions of which will be released next week on a new Donky Pitch 12″. “This 12″ is clearly aiming at the club for me,” says Banks. “I want this to be an odd record that people who aren’t into me pick up in a few years. I’ve mixed it in my sets with Miami bass stuff and it works.”

Like much of Banks’ music, the forthcoming album’s title has a nostalgic bent to it, deriving both from a misunderstanding in Banks’ youth and a longing for the early days of the internet. “When I was a teenager, I was buying this record from Arab on Radar, this noise-punk band, called Yahweh or the Highway. The guy at the local shop misread it and was like ‘Yahoo or the Highway,'” he explains. “I guess I also associate Yahoo with the internet in the ’90s. I didn’t grow up with Myspace or Tumblr. People who are bit younger than me have been discovering music since the instant they could appreciate it. I feel like I’m kind of running out of people to talk to about the internet in the ’90s. I do feel a bit lonely in that way.”