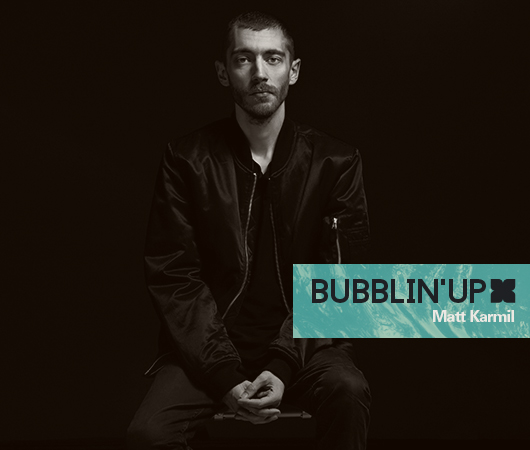 Wonderful moments of serendipity have rained down on English deep house producer Matt Karmil recently, but his early development as a musician came about as a result of far less lucky circumstances. Born in 1979 and growing up near Stonehenge in a “very nurturing but not particularly music-focused” household, Karmil had to contend with many years of serious ill health as a youngster, but credits this with setting him on a path that has so far led to releases on Beats in Space, PNN, and International Records Recordings, and promises to deliver plenty more in the months and years ahead.

“I had post-viral fatigue syndrome and Epstein-Barr virus,” he explains on the phone from a friend’s studio deep in the forest near Germany’s border with Belgium. “So from the ages of nine to 24, I would have quite an intense flu for six or seven months of the year. It’s not the absolute worst thing that’s ever happened to anyone, but it obviously had a pretty big impact on my psyche and my lifestyle, so music gave me some sort of grounding, something to grab onto and make me feel connected to the world. The experience of that is why I do music, absolutely.”

Endless hours stuck at home as a teenager allowed him to quickly become proficient in rock guitar before an inspiring teacher triggered an interest in classical music, leading him to learn classical guitar and some music theory. He moved to London at 19 and began a dual career DJing and working in studios, doing everything from producing and engineering to playing instruments, all the while contributing to various high-profile releases by the likes of Jamelia, Cody Chestnutt, and Neneh Cherry, the latter of whom he counts among his close friends. “It’s not core to my musical identity or anything,” Karmil says of this other life as a pop-music studio polymath, “but to work in those places with those people was really interesting and valuable.”

After London came a nomadic spell with stints living in various European cities, including Paris and Stockholm, before Karmil finally landed in Cologne, which is where his recent spate of good fortune seems to have begun in earnest. “I was in the city doing some stuff unrelated to the music I’m making now and I started to meet a lot of people connected with Kompakt,” he says. “They were just nice people I met and became friends with though—I wasn’t so ingrained in the scene there that I actually knew who they were until much later. I was also living in my flat in Cologne for about a year before I realized that my flatmate was [Barnt],” he laughs. “We’d meet in the kitchen and be hearing each others’ music through the wall and everything, but he’s a very discreet person, so he would never just tell me about that kind of thing. It got to the point where I was listening to and loving records by Barnt without knowing they were being made a few feet away.”

Karmil speaks of the supportive, nurturing musical community he has found in Cologne in ways that are genuinely touching, noting that “it’s all happened in such a nice way. It’s all my friends or friends-of-friends; there’s a real family atmosphere, and if you do music in that kind of environment, then it can be a really kind and loving thing.” Two of the well-placed new pals he happened on in Cologne were Jens-Uwe Beyer (a.k.a. Popnoname)—”he lives just across the street from me,” says Karmil—and Ada, both of whom have been instrumental in finally getting Karmil’s work out there. “Jens suggested I play some of my stuff to Ada, and she asked what labels I’d released on. I told her I’d been working on music for other people for years but that I’d never released a piece of my own music, and she just looked at me as if to say, ‘What?’ Anyway, she said she had this label and asked if it would it be okay if she released something.”

That became last year’s debut EP, Reverse Peephole, which was swiftly picked up by multiple luminaries of the European electronic scene, including DJ Koze, who put it on his FACT mix. “It just went from there,” Karmil says, “from nothing to Koze, Robag Wruhme, Michael Mayer, and Axel Boman all playing my tune, all in about two seconds. It was quite a shock because up to then, I’d just made tracks for myself because it felt like a nice thing to do in my spare time.” All this was quickly followed by an EP and an acclaimed debut album, —-, for Beyer’s PNN label. March also saw the release of an EP for Tim Sweeney’s Beats in Space label, another apparently effortless development that came about through an email correspondence struck up after Karmil noticed his remix of Popnoname’s “Change” on the tracklist of a BiS show.

As much as friendship has clearly played a part in Karmil’s music getting noticed by these kinds of people, it’s no surprise at all that they have also found a lot to genuinely love in it. The sparing mix of hazy basslines, filtered kicks, and simple sample loops that characterizes much of his work would fit neatly onto any Total compilation. At the other end of the spectrum is “So You Say (Dirty Tape Heads Mix),” the lead track on his BiS EP and a track Karmil describes as “the most optimistic thing I’ve ever recorded by about ten thousand times”; nevertheless, the song dovetails neatly with the sunny aesthetic of most of the releases on Tim Sweeney’s imprint.

“I think the simplicity of my records might be a rebellion against the melody-based, short-format pop music that I’ve worked on for so long,” Karmil says. “But I also think that if you have a good idea, then you don’t need to stick a load of other stuff in there. I try to present one idea in as pure a form as possible, get it right, and then go on and do the next thing in the same way, but with different ingredients. Not all pieces need to be everything to everyone.”

Looking ahead, Karmil is keen to release something on an English label soon. “I want to get back in touch with my Englishness,” he explains. “I’m quite influenced by where I am in the world, so I’d like to see how much of my Englishness I can bring back in so I don’t get stuck doing one thing.” Also in the pipeline is a track for an upcoming Mule Musiq compilation, I’m Starting to Feel OK Vol. 6, and a remix for John Talabot‘s and Axel Boman’s Talaboman project, two more artists that Karmil met thanks to a happy piece of good fortune. “I first met Axel just by bumping into him in the street in Stockholm one day. We had quite a lot of mutual friends because of me living there for a while, and he came up and said, ‘Hey, I put all three of the tracks from your new EP on my last podcast! Please send me more stuff!’ We became good friends after that and he’s really taken me under his wing and inspired me ever since.”

Some guys have all the luck. Sometimes, however, it’s impossible to feel anything other than very happy for them.