When it comes to his hometown, UK producer Murlo (a.k.a. Chris Pell) has mixed feelings. […] 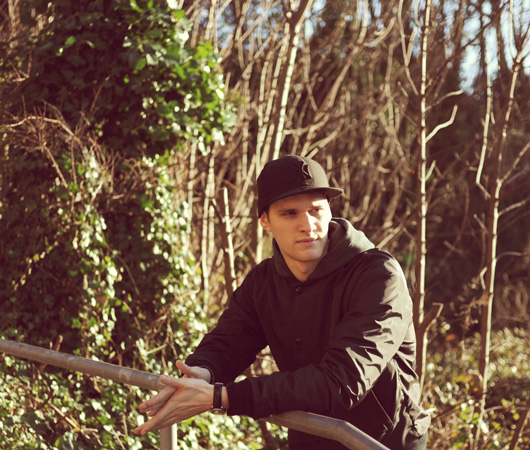 When it comes to his hometown, UK producer Murlo (a.k.a. Chris Pell) has mixed feelings. […]

When it comes to his hometown, UK producer Murlo (a.k.a. Chris Pell) has mixed feelings. Although he now resides in London, Pell grew up in Shepshed, a small place in the East Midlands which was once notable for being the biggest village in England. “Then it got turned into a town,” he says, “and everyone got pretty pissed about that.” He continues, “there’s nothing really there… I still got my heart there, but musically, fortunately not.” These days, Murlo is known for his dancehall- and soca-infused takes on the various strains of UK bass music, but growing up, the only dance music he heard, apart from whatever was on the charts, was donk—yes, that donk—or “abrasive, horrible” hardcore. “We never got the good bassline or niche,” he says. “That was a shame.”

In the end, it took leaving home for Pell to realize how much more music was out there. After relocating to Brighton to study illustration, he discovered garage, bassline, dubstep, and grime, the latter of which eventually shot him into dancehall, which in turn led to soca. While attending school, Pell also began DJing on a regular basis. “When I first moved down to Brighton, we were told on our course that we would have to pay for our own degree show, so were were throwing a lot of parties… It was fundraising, so we couldn’t afford to hire DJs.” Driven by a bit of financial necessity and fully enjoying the process of socializing with other guys who were similarly dipping their toes into club culture, Pell eventually dove headlong into dance music. He eventually took on the name Murlo, a moniker that actually stems from an elaborate inside joke in which Pell and some friends plotted to launch a radio show called Chateau FM with the tagline, “Music to Make You Whine.” Although it seems like a tossed-off idea, Pell has clearly put a lot of thought into it and claims that it’s still in the pipeline. He explains, “all the DJs are going to have different wine names. Merlot, DJ Shiraz… it’s stupid.”

Stupid or not, the name stuck—albeit with a slight spelling change—and Murlo was born. During this time in Brighton, he also began producing tunes, initially by remixing and re-editing some of his favorite grime, dancehall, and soca tunes. While his first experiments with FruityLoops dated back to his days as a teenager back in Shepshed, Pell’s rapidly expanding DJ workload in Brighton—which at the time included his own Angry Dance Party night—prompted him to start making tracks of his own, more out of necessity and a lack of access to high-profile promo lsts than anything else. His efforts paid off, as he was soon tapped to remix “Jela” by mathy dance-rock outfit Cold Pumas, which he transformed into a soca-flavored jam. That was followed by a request to remix Ghosttown’s “Badness,” a song which Pell also gave a thorough soca transformation.

In the months that followed, his production only intensified, and the name Murlo began popping up more frequently, largely thanks to sites like Soundcloud. Digital imprint Pollinate came calling, eventually putting out the four-track Nectah EP, the first original Murlo release. Making the shift from remixes wasn’t an easy task, as Pell explains, “I used to love having to work with something to start off. With remixes, I use to love using vocals as a kind of springboard for ideas. As soon as I sat with nothing in front of me, I was a little bit daunted.” Although he now feels more comfortable crafting Murlo originals, the remixes haven’t stopped coming, and only continue to boost his profile. Some of the most notable have been his bootleg reworks of artists like Mr. Vegas and Stylo G, which have been eagerly gobbled up by tropical-minded DJs looking for tunes with some extra low-end heft.

Moving to Brighton was clearly a transformative experience for Pell, but after several years in the seaside city, he increasingly felt the pull of London. “[Brighton] is a small place,” he says. “I don’t want to say that I’d outgrown it, because that’s a really pompous thing to say… I wanted something new.” After all, his visits to London were already growing in frequency, thanks to regular DJ gigs in the capital city. Nonetheless, Pell wasn’t always a fan of the place. “Where I’m from, it’s very anti-London. The small-town mentality and the city just don’t really mix very well.” He continues, “The first few visits to London, I didn’t really like it at all.” Obviously, he’s since changed his mind, especially after playing at parties like Hipsters Don’t Dance—where he now holds a residency—and attending the city’s wild bashment raves. After years of cultivating a passion for dancehall and soca largely through the internet, London provides Pell with a chance to experience the culture on a much more first-hand basis.

As such, it’s not exactly surprising that Pell relocated to London in late 2011. Shortly after his arrival, he crafted the tunes which would become the Wineyard EP, his second original release and an effort he describes as a “straight, 100 bpm bashment release.” He put out the EP via Bandcamp, but future releases with multiple labels, including an EP for Warrior One‘s King Pigeon imprint, are reportedly in the works. In the meantime, he keeps cranking out tunes and appears quite happy in his new surroundings, even if they are a far cry from the small town where he grew up. “After I actually spent time [in London] and started making friends, I loved [the city]. The big reason why I moved [here] was that—the people and the music scene.”

Murlo’s Wineyard EP is out now.